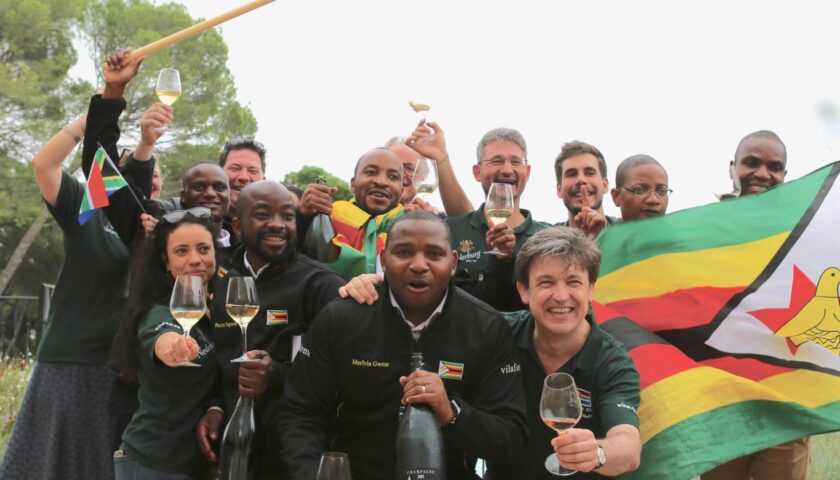 Typically wine tasting occurs when someone wants to find out if they like a wine or in order to figure out an ideal food for wine pairing purposes. Swirling, sniffing, sipping and spitting doesn’t sound all that sporting, unless you move the spit bucket further and further away. While awarding the Grand Prix du Cracheur d’Or at the Salon des Vignerons Indépendants in Paris makes wine spitting an actual sporting endeavour, it still seems like a bit of a reach.

Wine tasting may seem more like an art but blind wine tasting takes it back into the sporting arena as teams from across the world compete at an international wine tasting competition in France. It’s a bit unusual to talk about the film as a sports documentary but this seems like a natural progression based on the underdog tale’s clear parallels with the true story that inspired Cool Runnings. Instead of the Winter Olympics, bobsleighing and Jamaicans, we have the World Blind Wine Tasting Championships, wine tasting and Zimbabweans.

Armed with an uplifting story, charming characters and an unlikely dream team, Blind Ambition seems destined to become the backbone or inspiration for its own movie. Directed, produced and co-written by Robert Coe and Warwick Ross, the Cool Runnings comparison is a useful foothold that mostly works in Blind Ambition’s favour.

Battling an ongoing stigma, fine wines and wine drinking is still seen as an exclusive product and niche experience. Serving as a wonderful contrast for a “sport” traditionally dominated by white people, Zimbabwe’s national team make history by breaking the unofficial colour barrier and dam wall when it comes to wine appreciation. The sheer presence of Joseph and his team dismantles some of the longstanding misconceptions associated with wine and the echoes of Cool Runnings make the documentary just as accessible in terms of entertainment.

It’s a joy to see patriotic countrymen band together in order to proudly represent their birth country, even when they find themselves displaced and pursuing another version of the American Dream. South Africa’s complex history of segregation and xenophobia presents many challenges for people looking to make a fresh start but these setbacks seem manageable and even surmountable within the big picture. Ironically, Zimbabwe’s abundant resources once made it the bread basket of Africa. Yet, this crown seems to have since been bestowed upon South Africa and its reputation for being a free country where you can still make things happen, a place of unlimited potential and entrepreneurship.

Blind Ambition’s similarities with Cool Runnings predestine its narrative and provide a framework for the story as momentum gathers in the build up to the big contest. On the surface, this familiar underdog tale gives the documentary get-go to maintain its entertainment value, offering audiences enough formula to invest in the characters, get behind the team and cheer them over the finish line. Yet, it’s so much more than just a story about four friends forming an unlikely team to rewrite history in style. It’s also a coming-of-age drama about four charming Zimbabwean gentlemen who left their country in the hopes of a better life for them and their families.

Blind Ambition is more timely than ever, offering a window into the lives of foreigners entering another country and culture with wishful thinking in the spirit of unhu or ubuntu in this case. While it’s promising to see how each of these talented sommeliers have made a success of their journeys with wine, Blind Ambition doesn’t cast a blind eye over the inherent obstacles of starting over in an openly hostile and broken society.

Touching on the immigrant’s journey, the backstory details offer context, draw greater intimacy and connection with each of the team members. Blind Ambition isn’t primarily tasked with serving as a commentary on social incongruence in South Africa but rather aims to entertain, inform and uplift with its infectious optimism by showing just how far these contenders have come. An admirable achievement for Joseph, Marlvin, Tinashe and Pardon, it seems it couldn’t have happened to nicer guys.

Unassumingly charming, it’s a pleasure to spend time with these gents as they compete, crowdfund and carry their national flag onto the World Blind Wine Tasting Championships. Initially taken under the wing by South Africa’s head wine tasting coach, Jean Vincent Ridon, the team quickly realise their abilities through his guidance. Leading up to the Championship, they raise enough finances with a crowdfunding campaign launched by an avid supporter to get them to the Championships with a team kit and a coach-for-hire.

John Candy’s larger-than-life screen presence helped anchor the ceaseless charm, heart and humour of Cool Runnings. Taking over this role as coach in Blind Ambition is the eccentric Denis Garret, a former world blind wine-tasting champion and sommelier who would probably be replaced by Gerard Depardieu in the movie version. While Garret’s influence ultimately disadvantaged team Zimbabwe’s chances of taking top honours, his presence is a boon to the documentary. An absolute character and loose canon, his interjection gives Blind Ambition added offbeat humour and tense drama as Garret comes to encompass the best and worst of France.

Filmed a few years ago, you can understand how this documentary with so many moving parts has taken a few years to come to light. It must have been a mammoth task to sift through the nuances of each character’s story, find a consistent tonal balance when it comes to heart, humour and drama and lean on its strong parallels with Cool Runnings without capsizing into the inspiration. To this end, Blind Ambition works wonders… keeping its upbeat spirit, good pacing and emotional resonance. Able to reflect on where the team are now, Blind Ambition is a crowd-pleasing joy whether you consider yourself a wine aficionado or have never touched the stuff in your life.