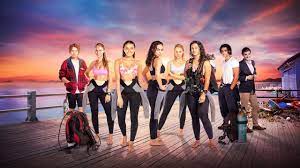 There have been so many teen dramas these days that show its teens drinking, partying, having lots of sex and cursing up a storm that a teen drama geared for kids is almost refreshing to see. Dive Club, a Netflix Australian import, is one of those rare teen dramas that kids can watch, but its story is definitely not goody-two-shoes. It involves a storm, a missing girl, a dude who just got released from prison and a town full of secrets.

A blonde teen is taking a selfie video on a small boat. “Welcome back to The Diving Roe, coming to you from our little slice of paradise, Cape Mercy.”

The Gist: The girls in the Cape Mercy “Dive Club” — Maddie (Miah Madden), Anna (Aubri Ibrag), Stevie (Sana’a Shaik) and Lauren (Georgia-May Davis), the blonde teen hosting the video — are shooting one of their dives. Though the gorgeous reefs under the bay, the girls find artifacts from a Victorian-era shipwreck.

As they bring their boat — the Indy — into dock, a cyclone starts coming in, and it’s a bad one. As the clouds darken and lightning strikes and wind increase, Lauren says she forgot her phone in the Indy. Maddie seems to be especially worried about Lauren’s safety as the girls get on their bikes to race home. We see Lauren get the phone then suddenly scream… and Maddie wakes up. She has “Missing Person” posters on her bed with Lauren’s picture on them.

It’s been 3 days since the cyclone hit Cape Mercy hard, and Lauren is still missing, as is the Indy. Lauren’s father, chief of police Jack Rose (Jai Koutrae), tells Maddie that they’re on top of things. But Maddie thinks that they’re not looking in the right spot, and the other two members of the club agree. Why would Lauren take the Indy out in the middle of a cyclone, right after pulling it to shore in preparation? They are determined to find the boat, and if the mast is down, that will prove that Lauren didn’t leave on her own volition.

Anna and her mother, Mayor Renee Volkov (Veronica Neave) greet structural engineer Jack Martin (Tim Ross) and his daughter Izzie (Mercy Cornwall). who are there to help get the town back on its feet. Anna takes Izzie around town and the rest of the Dive Club bring her in on their plans to look for Lauren. When Izzie tells them she saw an overturned boat as she helicoptered into town, the four of them steal a boat and go to look, in shark-filled waters. Two of them take the dive and find a box with medical supplies, but not much else.

In the meantime, Stevie’s former boyfriend Hayden (Alexander Grant) comes back to town after being in prison for 3 months after stealing and wrecking a boat. He’s determined to get Stevie back but he knows it’ll be tough. He’s shocked when his friend Henry (Josh Heuston) tells him that Lauren has gone missing.

Dive Club, created by Steve Jaggi, is a nice show that families can watch together that doesn’t talk down to the kids that it hopes are watching. It’s well-acted and generally well-written; in fact, the plotting of the first episode was better than a lot of TV-MA shows we’ve seen recently, that lean on sex, language, and/or gore to sell themselves. We’d certainly watch more episodes of DiveClub than, say, Sex/Life, for example.

But it’s also very reliant on the beautiful scenery in Port Douglas, Queensland, where the Australian production was filmed. There are extensive, beautiful sweeps of scenery, above and below the water’s surface, which linger for quite a long time. While this lets Jaggi and his writers jam less plot and character development into each 30-minute episode, it also makes the episodes drag a bit.

Also: The show is very, very white. Aside from Miah Madden, who plays Maddie, the show’s cast is more or less a collection of bland stereotypes from other seaside teen shows like Outer Banks or even Dawson’s Creek. We appreciate that Jaggi has created a mystery that’s supposed to intrigue everyone watching, but it would have been better if he diversified the town of Cape Mercy a little bit more.

This is how a “nice” show can end up missing the mark. Until the story ramps up, and we find out more about Lauren and the rest of her friends, it just looks like a series of generic teen show characters, albeit ones that are at least doing a decent acting job. In other words, you may need to give this show more episodes to really gain your interest.