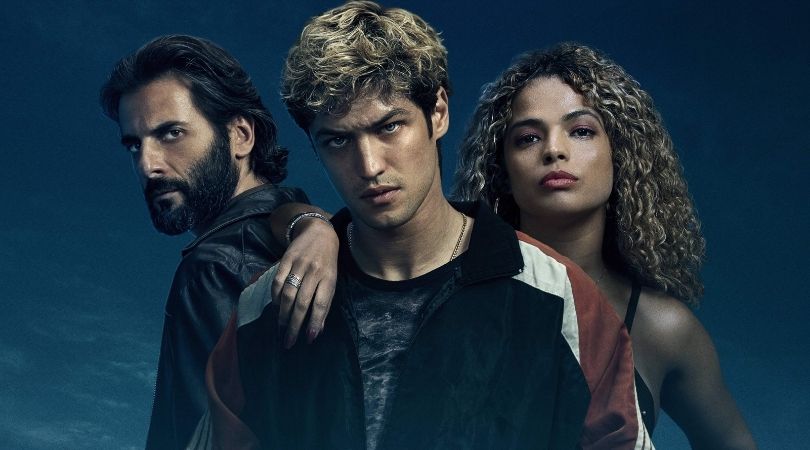 These days streaming content is in high demand. Platforms are constantly looking at ways to diversify their content in the hopes to unearth the next big franchise that will have people talking about it all over their social media platforms. Netflix is one of the leaders currently in high-quality international content, but Amazon has been making a solid push lately. Which brings us to the content in question, the Amazon original Dom season 1.

Dom is a frenetic drug-fueled, crime thriller set in the bustling coastal city of Rio de Janeiro, Brazil, during the 1990-2000 period, when cocaine was exploding onto the scene. The show is primarily focused on the strained relationship between Pedro Dom (played by Gabriel Leone), and his father Victor Dantas (played by Flávio Tolezani). The two characters’ stories are utter polar opposites, as Victor’s ambition is simply to get drugs off the street. Whereas Pedro is so dependent on his addiction he can’t see clearly through the haze of his high. He lives in a constant party condition, devoted to the pursuit of pleasure regardless of the risks to himself or others, and as the plot moves further, Pedro races ever faster after that elusive evergreen euphoria eventually turning to a life of crime and burglary.

The plot is cleverly paralleled as it jumps about within different time periods. The main source of the story is focused on the current timeline, one in which Pedro continues falling in with the wrong crowd, intent on taking what he wants, whereas Victor works a secret life as a narcotics officer. As the show continues to develop, we get to witness the origins of how each character wound up on their paths. While there are obvious parallels, it’s clear where each of their paths deviated.

Ultimately, the show’s foundation is built on two key conflicts. First, and most obviously, that between the clashing motives of Victor and Dom, a tale of parental tragedy that’s often been recreated. Underlying this, though, is the second dynamic which is the struggle between the haves and have nots, the rich and the poor, those who come from the nice part of town versus those who survived in the slums. These foundational points drive absolutely everything forward.

The performances are solid, as Leone brings a confident, charismatic, and frenzied energy to the role. It’s almost heartbreaking to watch him descend into the criminal underworld. He is often tormented by what is right and what he wants. Early on, this torment manifests after he steals his father’s laptop to pay for dope, but ultimately what he truly took was the trust in their relationship. Pedro tries to redeem himself in the only way he knows how, by filling the emotional hole with objects, for himself, and then for his father. Leone captures those elements so well, as he brings a real intensity to the character that echoes those inner demons. What I love about Leone’s performance is that he has an air of Taron Egerton about him. He fully invests himself into the character; he is Pedro Dom.

Tolezani meanwhile, plays the classic stoic cop, emotionally suppressed and unavailable for his son during his formative years. He does a brilliant job of bringing a gravitas to the character, and his stature and grizzled appearance certainly aid in this situation. Deep within him though, is a father who just wanted the best for his son, someone who loved the years he was a boy, but has lost control of him as a young man.

The cinematography is fantastic. It was refreshing to see Brazil highlighted as a location, with local talent getting the best out of it. During the first episode, titled “Kids Don’t Come With Instructions”, we are thrown right in the middle of a nightclub located in the favela (Brazilian slum). The visual of a third of the crowd waving automatic rifles was both intimidating and immediately sets the tone for what sections of Rio de Janeiro look like due to the overpopulation of these areas and the impossibility to police them. The contrasting view of switching from the favela to Copacabana beach is a real 180-degree switch, but it again underpins that main conflict that Breno Silva, the show’s creator, seems to be aiming for: the disparity in lifestyle based on where you were born.

Where the series is somewhat hamstrung is through the acting abilities of the other characters and its dubbing. Sadly some of the characters just don’t quite bring the same level of experience and ability to the show. Often times the performances just feel a little clunky and out of step. Additionally, with this being an international show, naturally you have the choice to using vocal dubbing in a language you prefer or utilizing subtitles. This is always a point of discussion with international films, and if you can, I’d recommend the subtitles, with the natural vocal acting, as the dubbing is pretty poor.

Overall, Dom season 1 is a fantastic overview of the criminal and narco underworld that exists in Brazil. It bears mentioning that this show was based on actual events that happened during the early 2000s in the country. The show highlights the complexities of the war on drugs due to the fact that most of the people living out of the favela simply have nowhere else to turn without access to proper education. The performances of Leone and Tolezani dominate the show emphasizing the bittersweet tragedy between father and son. Sadly, some of the other roles don’t always live up to the same standard. A great watch and I hope Amazon continues to go after interesting projects like this one!