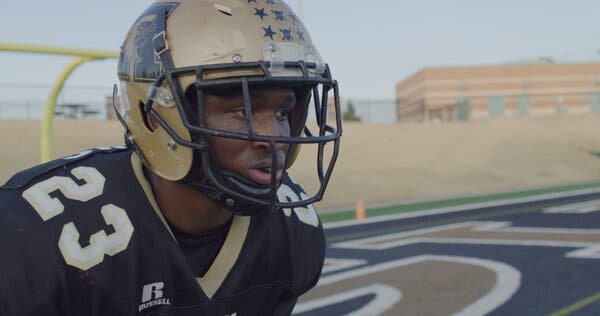 When you sit down to watch a high school football flick, you don’t always expect a cinematic touchdown, but you at least hope for a few first downs. You don’t expect the filmmaker to take a blindside sack fumble that’s returned the other way for a score.

That’s what it feels like watching “Under the Stadium Lights,” which drops on demand this Friday. It reminds us just how good a well-coached film like “Friday Night Lights” was, not only for its passion for high school football, but for its strong filmmaking fundamentals.

Based on the book “Brother’s Keeper” by sports writer Al Pickett and team chaplain Chad Mitchell, the film tells the true story of the 2009 Abilene High School football team, which recovers from a devastating loss the previous year to become Texas state champions.

I suppose the lead role is Milo Gibson, who debuted in father Mel Gibson’s “Hacksaw Ridge” (2016), but as the team chaplain, he unfortunately has to split screen time with the head coach (Glenn Morshower). By the time we meet his wife (Abigail Hawk) and kids, we wish we could see more of his story. At least the family clips can go on their acting reels.

Laurence Fishburne pops up as a restaurant manager giving a pep talk. “Pretty soon you won’t have any hands to eat BBQ because you’ll be holding that trophy!” He proceeds with a gospel singalong to “Amen,” which Sidney Poitier sang during his Oscar turn in “Lilies of the Field” (1963), but after that, Fishburne mostly seems to be going through the motions.

The rest of the acting is jarringly unnatural, which isn’t the young men’s fault. You can’t blame teenagers for coming across amateurish, but even the adults sound phony here, particularly a lawyer who meets with star Herschel Sims around the 19-minute mark.

The stilted acting is just one of the many ways the film lacks polish. Director Todd Randall opts for a raw, low-budget, almost documentary style, which could worked if the film wasn’t so obviously doctored by reedits from underwhelming test screenings. Even the title was changed from “Brother’s Keeper” (Biblical) to “Under the Stadium Lights” (Hollywood).

The original title suggested a religious calling to be our brother’s keeper, a fine sentiment articulated by Gibson at a pep rally for players dealing with repeated off-the-field drama. He also predictably narrates,“ Faith, family and football: the holy trinity,” a line we’ve heard a million times by coaches in real life and a million more by coaches in the movies.

It’s understandably romantic to paint football as a way of life — for many of us it is — but ironically we don’t see much football at all. Instead, the action relies on actual game footage with a lower-third banner reading “Eagles Highlights.” The film doesn’t even try to reenact the scenes with the actors, creating a tangible disconnect with the audience.

Look, I think my senior season would make a great movie as much as the next guy, but when you set out to make a movie, you’ve got to attempt some moviemaking. Otherwise, it comes across as a vanity project purely for the local community, rather than a movie to reach a wider audience. You can’t just show highlight tapes. We can watch those at home.

At long last we finally get some in-game action during the big climatic game. It’s here that the film comes alive, intercutting stunts, archival footage and cutaways of family watching on TV. Why couldn’t the whole movie have been like this? It’s too little too late, leaving us lacking the emotional investment needed to celebrate the slow-motion hero shots.

The end credits are just as egregious as the opening credits, hitting us over the head with voluminous text cards, explaining everything rather than letting the film speak for itself. The result feels more like a PSA that you’d show in a classroom or a church youth group rather than a blockbuster. Give viewers more credit; we’re smarter than you think.

In the end, “Under the Stadium Lights” makes me regret giving a mediocre review to “When the Game Stands Tall (2014), which was flawed but infinitely better than this. Save your $7.99 and rent that instead. Or, re-watch “Friday Night Lights” (2004), which joins “Remember the Titans” (2000) as the gold standard for high school football flicks.