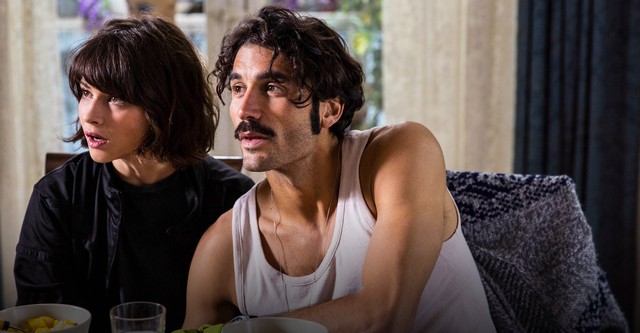 Landing on Netflix today is the Spanish romantic comedy, Don’t Blame Karma! (aka ¿Qué Culpa Tiene El Karma?). The movie – directed by Elisa Miller – focuses on two sisters, Sarita (Sara) and Lucia (Lucy), as played by Aislinn Derbez and Renata Notni, and follows the trials and tribulations of their love life.

In the film, Sara is an independent business woman, who sells clothing. Her job isn’t going great, but she’s doing her best to keep things ticking over, while at the same time trying to navigate a virtual relationship with her boyfriend, Roberto.

One day, Sara’s sister, Lucy turns up at the family home in Mérida, to announce her engagement to pop singer, Aarón Star. Lucy’s arrival and announcement comes as quite a shock to the family, and especially to Sara, as Sara and Aarón were former best friends at school, and were once quite sweet on each other.

Over the coming days, Sara and Aarón reconnect, old memories are stirred up, and long-forgotten feelings bubble to the surface. Sara appears to be at her best when she’s around Aarón, and the situation appears to be mutual, but she’s very aware he is engaged to her sister and doesn’t want to overstep any boundaries.

If that wasn’t enough to contend with, Sara is in the midst of organising garments for a fashion show, is helping to design her sister’s wedding dress, is witnessing her parents go through marital difficulties, and has (sort of) agreed to marry her boyfriend, Roberto. But can she balance and contend with all of these things, including her feelings for Aarón, or will everything eventually come to ahead?

The film isn’t awful, it’s just rather dull. The story on offer here has been done countless times before, often with more spark, and this doesn’t help the film stand out.

The film is also slow and boring. Despite its relatively short running time (less than 90 minutes), it is a slog to get through, and it all runs out of steam rather rapidly.

There are moments of humour dotted throughout the film, and these do help to keep things going, but the gags are few and far between, and are only ever half-decent at best. I chuckled occasionally, but not enough to get beyond a few minor titters.

The only time I found myself truly engaged with the film was every time Sara stared wide-eyed at the screen, essentially breaking the fourth wall, by reacting to another troublesome situation in her life. Aislinn Derbez – who plays Sara – has quite expressive eyes, and she knows how to work them to great effect.

Using a spot of ‘eye play’, Derbez allows her character to say so much without having to utter a word. Her performance brings in some additional humour from time-to-time and this is at least a plus point for the movie.

But despite Derbez doing her best with the material, the film just isn’t very interesting. There’s nothing exciting or imaginative here and it all feels kind of empty.

Don’t Blame Karma! has clearly been put together by people who want to tell a story, and who want it to work, but that’s simply not enough. In fairness, it looks fine and the picture gets from A to B to C, but there’s nothing special on the screen.

This is a by-the-numbers picture, which doesn’t do anything impressive, doesn’t add anything to the genre, and is largely very forgettable. I predict Don’t Blame Karma! will come and go very swiftly, and I doubt I’ll remember anything about it within a few days.