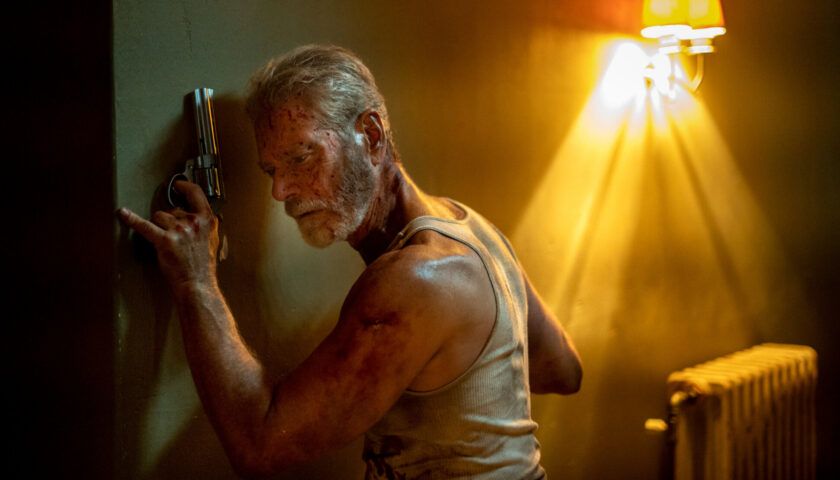 “Don’t Breathe 2,” in which Stephen Lang once again portrays a furious blind Gulf War veteran who fends off a handful of intruders in brutal makeshift ways, is a worthy enough sequel to “Don’t Breathe” — and yes, that’s about half a compliment. The original, released in 2016, was a jacked-up home invasion thriller with horror elements, but as staged (with a classically angled cleverness) by the director Fede Alvarez, it stayed tethered to a certain nuts-and-bolts, drive-in-movie-from-the-past reality. The script was bare bones, but critics liked it in much the same way that they’d liked “The Bourne Identity” — for its analog “values,” which in this case came off as the values of a thriller made with garish ingenuity for the Times Square crowd in 1982. It was the kind of canny exploitation picture that had fed Quentin Tarantino’s youthful dreams, the kind he drew upon when he imagined the climax of “Once Upon a Time in Hollywood.” And Lang had a real aura, portraying a wrathful avenger with a streak of genuine evil, which in this pulp setting counted as “moral ambiguity.”

“Don’t Breathe” was a sleeper hit, taking in $89 million at the box office (on a budget of $9 million), and striking while the iron was hot would have been the smart play. Pandemic issues aside, I have no idea why “Don’t Breathe 2” is coming out so many years later, but apart from that gap the sequel incorporates several key changes. Alvarez is no longer the director; his screenwriting partner, Rodo Sayagues, is — and though he does a competent job, he doesn’t match the stylish claustrophobia of the original. The other key difference is that Lang’s Norman Nordstrom is now, despite some red herrings, a more or less unambiguously good guy, like John Rambo stuck in the middle of a “Purge” sequel.

That may be disappointing to some, but Lang, thin and muscular in his white hair and beard and grimy sleeveless T-shirt, remains the best thing about the movie. He’s 69 now, and he plays Nordstrom as a raspy, broken figure whose anguish lends him a singular strength. He keeps getting pummeled and stabbed, but he keeps coming back. It’s the rare action turn I would describe as a performance of real feeling; Lang makes you experience every slice of his flesh as a small wound to the soul. The character’s blindness is no more of a handicap than it was for Zatoichi, but with a daughter now, or at least a daughter figure, Phoenix (she’s played by the wide-awake Madelyn Grace), Lang, in this movie, has become like the King Lear of aging splatter action stars. He’s hammering heads against the dying of the light.

For a while, in his scrubby stately home in Detroit, Nordstrom has to save himself and Phoenix from a trio of intruders who are pure sociopathic slime, and this part of the movie is fairly standard. Some of the criminals aren’t too bright: After one (Bobby Schofield) winds up with his lips and nose epoxied shut, his comrade, played by Adam Young with long hair shaved at the sides to set off one of those faces that just about screams “psycho” (like David Patrick Kelly’s in “The Warriors”), decides to let him breathe by sticking a screwdriver through his cheek. But that’s all just the appetizer. The hooligans have been sent at the behest of Raylan (Brendan Sexton III, still squirrelly after all these years), who has a warped family agenda of his own.

The way sequel culture now works, yesterday’s grungy one-off set in somebody’s basement becomes today’s…universe? That’s what happened with the “Saw” films, which in addition to making the world safe for torture-porn numbness became as much of a cosmology as the “Avengers” films. In the case of “Don’t Breathe 2,” one reason that the movie, for all the operatic (and outlandish) grisliness of its second half, isn’t as good as the original is that the original didn’t have a trace of that franchise self-consciousness. In this one, you can feel Stephen Lang’s Nordstrom being elevated to a “mythological” level. (There’s even a post-credits teaser.) He gets beaten up, beaten down, though never beaten to the punch. By the end, he looks all but ready to receive last rites, though if you were to lean in close you know just what he’d be seething out from between cracked ribs: I’ll be back.