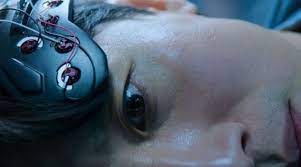 At some point in the second episode of Dr. Brain, the main character syncs his brain with the brain of a dead cat. I could explain the process, purpose and context for this speculatively scientific endeavor, but suffice to say it’s every bit as silly as it sounds. That moment is easily my favorite part a drama that marks Apple TV+’s first Korean-language original.

Unfortunately, like everything else in Kim Jee-woon’s six-episode adaptation of the Korean web toon of the same name, the feline brain sync represents an amusingly loopy concept delivered with only lackluster returns. For a show with a wild central premise and a goofily brazen title, nothing here rises to the level of wildness that the show is teasing, nor is there the sort of grounding that could work as an alternative. The central mystery in Dr. Brain is twisty enough to have kept me curious, if rarely gripped, for four episodes. After that, the story is resolved in two arduous marathons of exposition that pay off almost none of the series’ biggest ideas about memory, the complex networking of the human brain, and neurodiversity.

In flashback, we’re introduced to a young Sewon Koh, brilliant but distant. Sewon, who’s diagnosed as being on the autistic spectrum, witnesses his mother dying under tragic circumstances, an event that leaves him with more questions than answers. About what? It hardly matters. Then it’s off to the present day, where Sewon (Lee Sun-kyun) has become an ambitious researcher, obsessed with “unlocking what was inside the brains of others.” Somehow, even though nobody believes in his goal of “synchronization of brainwaves using quantum entanglement,” he’s got a job that allows him to kill countless rats while trying to sync their memories.

When mysterious private investigator Kangmu (Park Hee-soon) begins asking questions about Sewon’s son’s death and his wife’s attempted suicide, Sewon decides the only way to find answers is to escalate his research to human trials, playing detective himself by syncing his own brain with the memories of dead or comatose patients. And a cat.

For reasons you can probably imagine, it’s not a foolproof process, and sharing memories with these subjects leaves a mark on Sewon. He’s soon losing track of which memories are his own, and he’s even acquiring traits from the people (and cats) he syncs with, all in the name of solving a very personal mystery. And yes, if that sounds exactly like the premise of iZombie, only with sensor caps instead of brain-eating, it absolutely is, minus the sense of humor.

To be perfectly clear, it isn’t that I want Dr. Brain to be realistic. Necessarily. I want it to be consistent, and writer-director Kim fails in that regard. Dr. Brain is handsomely produced, with lots of evocative nighttime photography of Seoul, usually in the rain, and sometimes there are inspired visuals to convey Sewon’s new memories and their lingering effects. There are fun first-person POV shots, peaking with the cat, and there are minor aesthetic variations depending on whether he’s seeing the world through the eyes of a hired killer or a hard-boiled PI. There’s no follow-through, though, on any of it. After a shot or two infused with fun, the memories usually play out as if we’re viewing just another scene from the show in a boring third-person perspective.

By the fifth and sixth episodes, we’ve gone through a tremendous amount of scientific mumbo-jumbo to end up with two characters having a virtual conversation on a park bench surrounded by grass that’s very slightly greener than normal. This is also around the time that Sewon starts announcing rules about brain-syncing that haven’t been justified by anything we’ve seen previously. If the writer-director doesn’t buy into the science fiction trappings of the story, there’s no way for the audience to do so.

Kim doesn’t sustain the premise for six episodes, neither in the heightened mechanics of the plot nor, finally, in the mystery. There are action scenes and fleeting attempts at supernatural frights, all delivered with joylessness rather than the excitement of a storyteller enjoying a potentially boundless and entertaining narrative framework. As the padded episodes began to drag, I kept thinking about what a Park Chan-wook or vintage Brian De Palma — a more adept and operatic blender of psychology and suspense — might have done with Dr. Brain as a two-hour feature (or, actually, what Kim Jee-woon would have done with a more condensed format).

The series has slightly more investment in the exploration of atypical neurology. A decade ago, South Korea reported rates of diagnosed autism far above the global average, and that has informed a recent wave of storytelling, including the original series that ABC remade as The Good Doctor. I’m not here to review cultural approaches to autism, only to acknowledge that certain parts of the show’s understanding of the main character feel fueled by a very surface-level irony — he can’t comprehend how other people see the world, so he develops technology to do so — instead of any in-depth curiosity. It’s autism-as-very-elaborate-plot-device.

Sewon’s “learning to feel through fantastical technology” arc gives Lee things to play, even if the character’s psychological profile is thoroughly unconvincing. Most of the actors here aren’t given even that much to work with, unfortunately. Seo Ji-hye plays a police lieutenant who doesn’t have a single character trait I could identify. Kangmu has a little edge, and that lets Park deliver the series’ occasional dose of personality, though the detective is another part without backstory or distinctiveness.

It’s here that one should mention that sometimes subtitling is an art that concentrates on conveying necessary plot information at the expense of individual voices, so I can’t say for sure what got lost in the translation. I only know how often Dr. Brain gets bogged down in information dumps. So even if Random Supporting Character A or B has a sense of humor or clever or colorful dialogue in the original Korean, it would make little difference.

For the most part, the performances are uniformly sturdy and uniformly dry. That approach matches the characters, but it’s a mismatch for a show called Dr. Brain that features a brain scientist trying to solve a mystery by, among other things, tapping into the brain of a cat.