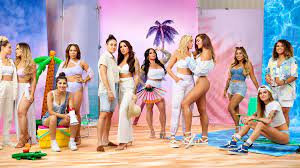 Tampa Baes’ first order of business is assuring you, the viewer, that it’s got drama for miles. The Prime Video reality series is set in the city’s thriving but insular lesbian scene where, as one star puts it, “Everybody knows everybody. Everybody’s dated everybody. Everybody knows your fucking business.” And the show makes good on its promise: Over the course of its eight-episode season, its stars exchange sloppy kisses, tossed drinks, accusations of cheating, and incriminating cellphone videos. But its true appeal lies not in its viciousness but its warmth. The drama, it turns out, only detracts from what’s actually compelling about Tampa Baes.

Initially, though, it feels like drama is all there is. The first episode maps out the complicated web of connections among its 12 stars, and sets up a simmering rivalry between two power couples (Brianna/Haley and Summer/Marissa) to serve as a narrative throughline. Tampa Baes can feel too familiar in its first couple of episodes, right down to its cast: Though the series is a rarity for its focus on lesbian women, it has already come under fire for its exclusive focus on young, thin, light-skinned women who fit conventional standards of feminine beauty, and nothing about the first season will counteract that criticism.

The “baes” quickly sort themselves into easily digestible archetypes like the party animal, the empath, the comic relief and the queen bee. They gather to drink and flirt and talk shit about each other in confessionals, all while insisting they absolutely hate drama — because as even viewers who’ve never seen more than a few minutes of Real Housewives are aware, that’s what reality TV characters are supposed to do. (Full disclosure: I’m one of those reality TV newbies.) It’s not so much that the formula doesn’t fit Tampa Baes as it is that Tampa Baes doesn’t seem to have figured out anything new to do with it.

The show starts to take on a shaggier charm, though, when it’s able to set aside the intragroup squabbling to focus on cuddlier individual arcs. Tampa Baes doesn’t even pretend to present a holistic portrait of its characters — most of their jobs are mentioned only in passing, and almost no one seems to have close friends outside the main cast. But it does make room for the women to work through issues like Cuppie’s anxiety or Haley’s painful relationship with religion. While the show doesn’t delve deep enough into any of those issues to teach any lessons, let alone break new ground, moments like those bring the stars into focus as relatable and likable figures.

The most compelling material focuses on the women’s families of origin, whether it’s Marissa showing her friends around a Greek Orthodox Easter celebration or Jordan working up the nerve to come out to her grandparents, with Shiva’s steady support. One of the best moments of the season involves one couple, Ali and Nelly, treating their mothers to a girls’ night out at a strip club. You’d have to have a heart made of stone not to be endeared by the giddy delight on the faces of the moms, or the warmth radiating from their daughters and their friends.

But the night takes an ugly turn as the same old drama between the two “It” couples rears its head yet again, ruining what was previously a perfectly lovely night, and not in a fun way. Tampa Baes‘ worst misstep is its assumption that it’s inherently fascinating to watch two couples snipe at each other for months about nothing, while simultaneously insisting that they’re soooo over it. As anyone who’s ever had to grit their teeth through a friend’s 800th rehash of some ancient grudge can tell you, even the juiciest gossip grows stale when it’s trotted out too many times.

The good news is that Tampa Baes is on Prime Video, where it’s very easy to fast-forward past those scenes to get back to what the show actually does well: wash over you with gentle fantasies of a life where the sun’s always out, the drinks are always cold, and your besties are always up for day-drinking through one Instagram-friendly, production-approved group activity after another. (Tampa Baes works very well as a travel guide, in case you’re thinking of squeezing in some skeet-shooting or ax-throwing on your next trip to Florida.) Sure, it can be a bit of a mess — but as with the baes themselves, that’s part of the allure.