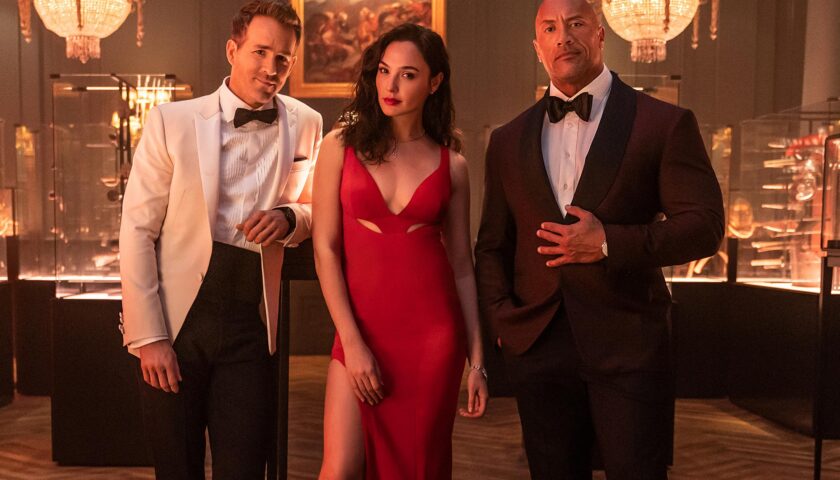 You can’t argue with the muscular marquee value of headlining Dwayne Johnson, Ryan Reynolds and Gal Gadot in a slick, fast-paced action thriller laced with playful comedy, even if it’s an empty-calorie entertainment like Red Notice. Like many Netflix star vehicles, writer-director Rawson Marshall Thurber’s busy crime caper has more glossy industrial sheen than unique personality. But it’s diverting enough to justify the sequel so clearly set up in its final scenes, even if it’s unlikely to linger in the minds of many viewers beyond the end credits. Mostly, the derivative adventure keeps you occupied checking off the many films from which it borrows.

Some of those, like the Indiana Jones movies, are acknowledged with a cheeky wink — for instance when Reynolds’ Nolan Booth, played with his trademark obnoxious smartass attitude, descends into a vault crammed with priceless antiquities looted by Nazis and whistles a couple of bars of John Williams’ Raiders of the Lost Ark theme. There are less overt but no less redolent inspirations throughout Red Notice — to the Bourne, Bond and Mission: Impossible movies, the National Treasure franchise and the Sean Connery-Catherine Zeta-Jones romp Entrapment. Maybe even a touch of Mr. & Mrs. Smith.

The production flashes the names of international locations spanning five continents across the screen at regular intervals, but because of COVID-19 restrictions, it ended up being shot entirely in Atlanta. Production designer Andy Nicholson has done a creditable job re-creating famous sites like Rome’s Castel Sant’Angelo in the buoyant opening scenes, though elsewhere, attentive eyes will be quick to spot studio sets. A South American jungle, complete with a waterfall and lagoon, almost conjures thoughts of the Maria Montez camp classic Cobra Woman.

A mock TV history special sets up the backstory with the mystery surrounding three bejeweled eggs, each one more exquisite than the last, presented to Cleopatra by Mark Antony on their wedding day. The eggs were long believed to be a myth, until two of them turned up in 1907; one now sits in a Rome museum and the other with a private collector. But the whereabouts of the third remain unknown.

She seems less than thrilled with the unsolicited collaboration of Hartley, even more so when they both turn up to apprehend slippery Nolan and retrieve the treasure from his swanky pad in tropical Bali. When the egg again goes missing — with a fake being switched for the real thing — and a hefty cash transfer lands in Hartley’s account, Inspector Das presumes he’s in on the theft and adds him to her wanted list. The top-level international arrest warrant is called a “red notice,” hence the film’s generic title.

Through some fuzzy plotting that probably doesn’t stand up to close scrutiny, Hartley is forced to team up with Nolan to clear his name and track down the real mastermind pulling the strings from behind the scenes, another notorious art thief known as “The Bishop.” No prizes for guessing who plays that devious shadow figure. She seems to be one step ahead of her rivals at every turn in a plot that keeps deftly springing double-crosses, surprise twists and long cons through to the very end, when all three of Cleopatra’s eggs are finally within reach.

While Thurber’s script never quite shakes the feeling of déjà vu, it does deliver a steady stream of amusing one-liners, most of them given to Reynolds’ self-serving jokester. “You a top or a bottom?” Nolan asks from the bunk bed when Hartley finds himself sharing a Russian prison cell with the thief. Johnson, who worked with the writer-director previously on Central Intelligence and Skyscraper, does his usual affable deadpan with relaxed charm. He rolls his eyes every time he’s the butt of another one of Nolan’s wisecracks, in a begrudging rapport that inevitably morphs into bromance.

The film’s keenest pleasures come when Gadot is onscreen, clearly having a ball shrugging off all traces of heroic nobility to play a ruthless badass who makes everything look easy. The Bishop (we never learn her real name) is a supreme tactician with useful connections all over the world, who handles herself formidably whether in high-kicking heels, with firearms, or by grabbing whatever ancient weaponry is at hand.

There’s a fun, flirtatious buildup between her character and Johnson’s as they tango during a ritzy party at the Valencia mansion of a billionaire arms dealer named Sotto Voce (Chris Diamantopoulos), who owns the second egg. He keeps it in a high-security vault full of priceless artifacts, with entry requiring lots of cool gadgetry and smart subterfuge. The fight that ensues once the intruders are inside that confined space, like all the physical clashes, is expertly choreographed.

The biggest set pieces, in addition to the high-speed Castel Sant’Angelo sequence, include a Russian prison break that turns out to be on an icy mountaintop, and a chase through the labyrinthine tunnels of an abandoned South American copper mine, with Hartley, Nolan and The Bishop in a deluxe 1931 Mercedes and Inspector Das and her team in pursuit in a jeep. Despite the ample gunfire and even some low-level torture scenes, there’s no real bloodshed or death, making this a generally family-friendly crime jaunt.

Thurber pads out the character development by giving all three protagonists their respective daddy issues. But that half-baked psychology doesn’t do much to disguise the fact that they’re all playing minor variations on their familiar screen personas, right down to an amusing Vin Diesel gag that’s possibly a sly nod to The Rock’s old Fast and Furious feud. There’s nothing groundbreaking in Red Notice, but depending on your affection for the stars, you could do worse. You might even get a kick out of the weirdly gratuitous British pop star cameo.