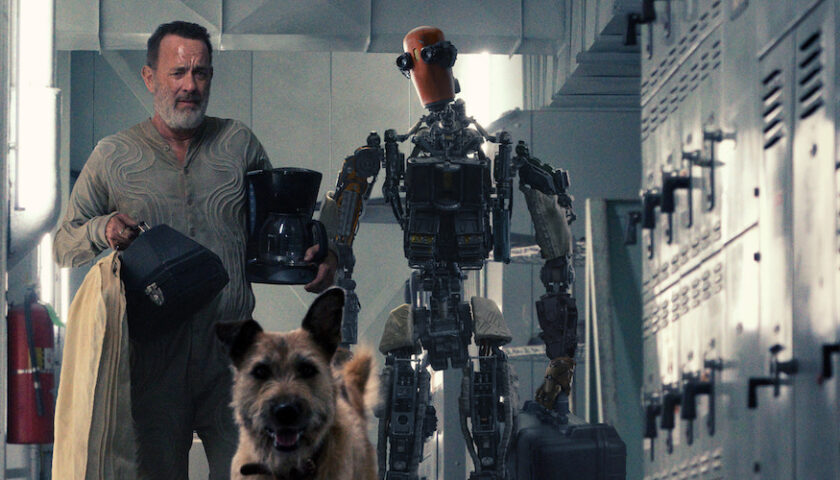 It’s a challenge to keep count of the number of reaction shots in which the adorable rescue dog named Goodyear cocks his head quizzically or barks at the robot built with the express purpose of taking care of him in Finch. There’s little that’s unpredictable in Miguel Sapochnik’s unabashedly sentimental sci-fi road movie, which could almost have been assembled in a robotics lab from the durable parts of countless movies past. But darned if I wasn’t misting up in the melancholy climactic scenes. I blame the charismatic canine, though credit is due also to the eternal Everyman appeal of Tom Hanks in a tailor-made role and Caleb Landry Jones’ wonderful motion-capture performance as his AI creation.

The movie originally was scheduled to open theatrically through Universal in October 2020, but was pushed back because of the COVID lockdown and eventually sold to Apple TV+, where it premieres Nov. 5 and should find a receptive family audience. Written by newcomer Craig Luck with a hand from longtime Ridley Scott associate Ivor Powell, the screenplay is a corny mishmash of generically familiar elements from postapocalyptic survivor movies, heartwarming man’s-best-friend tales and robot buddy scenarios.

While the narrative spine is basically The Road, the feel is more often like Cast Away, with the latter connection reinforced by the star and by the name of first-billed executive producer Robert Zemeckis. In Cast Away, Hanks’ stranded character spent much of the action in one-sided conversations with his sole companion, a volleyball named Wilson. Here, he plays ailing former robotics engineer Finch Weinberg, whose only company is Goodyear and the increasingly sentient robot — who names itself Jeff — that he built to look after the dog in the event of his physical decline or death.

You’ll know almost exactly where Finch is going every step of the way, but the movie’s balance of technology and disarming tenderness gradually wears down resistance, with Gustavo Santaolalla’s gentle score helping the case.

For the 10 years since a cataclysmic event rendered Earth an uninhabitable wasteland, with 150-degree temperatures and toxic radiation levels, Finch has been living alone with Goodyear in the underground St. Louis laboratory of the company where he once worked. Wearing a UV suit that monitors external conditions, Finch goes on regular foraging expeditions accompanied by a modified lunar rover named Dewey to retrieve canned goods from the few places not ransacked by desperate and mostly unseen human survivors.

Back in his bunker, Finch has been building a sort of scrap-heap droid — the upright, chatty C-3PO to Dewey’s chirping, nonverbal R2-D2 — programmed with encyclopedic knowledge that includes a manual for the training and care of dogs. The new robot’s primary directive, beyond preventing harm to Finch, is to protect Goodyear in Finch’s absence. But even before the AI family addition has been taught to walk and its data fully loaded, it forecasts a convergence of major weather events bringing a 40-day superstorm their way.

That forces Finch to load up Goodyear, Dewey and the as-yet-unnamed new droid into a solar-powered RV and head west. He chooses San Francisco as their destination, inspired by a postcard of the Golden Gate Bridge.

Despite poignant notes in the all-too-foreseeable depiction of a planet ravaged by climate change, it’s remarkable just how low-stakes the script feels. No sooner have they hit the road than Finch’s nagging cough and weak spells start escalating to the level of Mimi in La Bohème. That leaves little doubt as to where the story’s headed. Meanwhile, perilous interludes like a narrow escape from human scavengers play out in a chase scene oddly devoid of suspense. A tornado strike in which Jeff takes charge of battening down the hatches packs a slightly more visceral rumble.

Director Sapochnik — whose last feature was the 2010 flop Repo Men, but who has found more success with TV, notably Game of Thrones — seems to have misheard the PG-13 mandate and instead opted for treacly PG. The main focus becomes the efforts of the increasingly ruminative Finch to teach Jeff human values such as trust and affection, which he does in a series of personal anecdotes, including one relaying the traumatic circumstances of how he and Goodyear found each other when the latter was just a pup. His other aim is to forge a bond between Jeff and the stubbornly wary Goodyear. If you don’t guess where those two will end up, you obviously don’t get to the movies much.

More than the expected majestic vistas shot in rugged New Mexico landscapes by Jo Willems — the Belgian DP behind the atmospheric visuals on the terrific Brit horror His House and also on three Hunger Games films — the emotional element dominates.

What keeps it all watchable is the integrity Hanks brings even to the folksiest mush. The script lets us know that Finch is a technological wizard with an analog soul by having him sing “American Pie” to himself while weaving his way through a dust storm, and playing Perry Como on vinyl while chilling in his hideout. But Hanks conveys Finch’s regret and encroaching sadness with welcome understatement, and his mix of exasperation and nurturing patience with Jeff is often quite moving.

The film’s other prime asset is Jones’ superbly expressive vocal and physical work as the robot. Speaking in a mechanical voice that sounds vaguely Russian at first but steadily gaining in fluency and conversational ease, Jeff is constantly questioning, bowing his head in solemn acknowledgment of some new discovery or staring off into the vast empty skies in quiet contemplation, suggesting a burgeoning understanding of factors not programmed in his data input.

Finch wins no prizes for subtlety or originality, but there’s always an audience for this kind of sweet assault on the tear ducts, especially when there’s a cute dog involved.