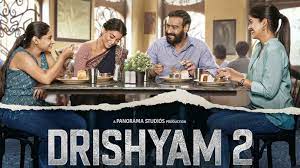 The sequel to Drishyam, which is adapted from a Malayalam thriller of the same name, begins where the 2015 film had left off-Vijay Salgaonkar (Ajay Devgn) emerging from a police station carrying a shovel. Seven years ago, the almost-perfect crime had a witness, and that’s what gives the police impetus and ammo to revisit the Sameer Deshmukh missing-case investigation so many years later.

Vijay is now a theatre owner who dreams of making a film based on a story he has written. His elder daughter Anju (Ishita Dutta) is still reeling from the shock of the traumatic events, while his younger daughter Anu (Mrunal Jadhav) is in her teens. Every member of the family, including his wife Nandini (Shriya Saran), is moving on with life as usual-but always on guard. And with a haunting sense of fear which never leaves them. A series of unexpected events turn the Salgaonkars’ lives upside down when a truth threatens to change everything.

Even the support Vijay received from his community seven years ago, begins to dwindle as the plot unfolds, and they begin to question if he actually committed the crime. The film gathers up steam when the police investigation led by Inspector General of Police Tarun Ahlawat (Akshaye Khanna), and Sameer’s (who’s accidental death in Drishyam formed of the crux of both the films) mother and former IG Meera (Tabu), swings into action. This time, they follow the leads without underestimating the protagonist.

Following a similar pattern like the first, helmed by the late Nishkant Kamat, here director Abhishek Pathak takes things slowly in the first half. The family’s dread and anxiety are palpable as he gradually builds the tension in the narrative. As the investigation progresses, every character serves a distinct purpose, and helps heighten the drama and suspense.

Ajay Devgn shines as a protective father who loves his family unconditionally; he is a simple man with a razor-sharp mind. Akshaye Khanna, who in the past has played a cop, in films like Mom and Ittefaq, lends much gravitas to these gripping proceedings. Tabu is simply outstanding as Meera, a mother seeking justice for her son. Rajat Kapoor shines as her husband who eagerly wants everything to be settled soon. Kamlesh Sawant reprises his role as Gaitonde, who is still ruthless and bloodthirsty for revenge. Shriya Saran, Ishita Dutta, and Mrunal Jadhav, who play other Salgaonkars, have almost similar roles as they had in the previous part. Saurabh Shukla as writer Murad Ali plays his part well to resolve the mystery.

Jeethu Joseph’s original story is skilfully adapted by Aamil Keeyan Khan and Abhishek Pathak. They deftly weave in multiple threads, leading to a stellar climax packed with numerous twists that are as good as the first film. While the first one undoubtedly had a certain novelty to it, the sequel stands strong too, it intrigues and entertains. The story here remains unpredictable for the most part, however, some of the setups seem contrived and some situations too far-fetched. Having said that, making a sequel to a very successful first part wherein most of the characters are the same is quite a challenge.

Amitabh Bhattacharya’s song Sahi Galat that comes with the credits and the title track is upbeat. Saath Hum Rahein is slow but perfectly filmed to capture the bond family share. The background score by Rockstar DSP (Devi Sri Prasad) blends well and adds to the intensity of the drama.

Overall, Drishyam 2 dishes out plenty of twists and turns to keep you hooked throughout, just like its predecessor. And the story of the Salgaokars will continue to remain in public memory.