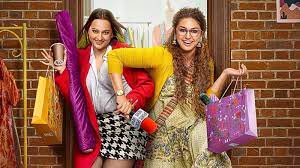 Double XL tells a lot from its name about its basic idea, and with two overweight ladies in the poster (Sonakshi Sinha and Huma Qureshi), you get to know more about it. The film has a good topic in body shaming but fails to capture the essence of the story. You have to be very careful while dealing with such ideas, which is clearly missing here. Women are always criticised for their fatness, be it in any field-cinema, fashion, corporate, or even sports. The fight against this was missing in Bollywood, and fortunately, it has come now, with known faces but unfortunately, with immature storytelling.

Double XL is the journey of two plus-size women, Rajshree Trivedi (Huma Qureshi) from Meerut and Saira Khanna (Sonakshi Sinha) from New Delhi, as they navigate society’s beauty standards. Rajshree wants to become a sports presenter, but her mother doesn’t approve. She has to face several rejections due to her extra large size, while Saira gets snubbed for the same reason in the fashion industry. These two double XL ladies catch up and fly off to London to achieve their dreams. There they are accompanied by two good men, Zorawar (Zaheer Iqbal) and Sreekanth (Mahat Raghavendra), who don’t have any problem with their sizes. The quartet tries to find success during the process, and that’s all you get to see in Double XL.

Sonakshi Sinha as Saira is a funky girl, and that’s something new for Sonakshi. She hasn’t played such a bindass character in recent time. However, the weight issues and some sort of dedication were missing. The same goes with Huma Qureshi, who gained 20 kg for the role. She looks fine though, but the performance isn’t up to par compared to her recent ones. Zaheer Iqbal’s Zorawar, aka Zo Za Zu, will irritate you at first, but he has some normal scenes by the end. The second male lead, Mahat Raghavendra, comes with a typical accent and goes with a typical act. I was expecting the supporting cast to add something, but they have failed, but surprisingly, the cameos are fantastic. Kapil Dev, Shikhar Dhawan and Jimmy Shergill give a pleasant surprise with their sweet cameos.

What’s good about Double XL is the topic. The discussion and arguments over this topic are needed, and let me tell you, those have to be brutal and hard-hitting, but Double XL didn’t even seem to have tried. The comedy factors have overtaken serious issues like body shaming, and the results are highly disappointing. Firstly, the issue agent highlighted it well enough. Rajshree and Saira both never worried about their weight or even looked serious about it. The problems they face aren’t really caused by being overweight, but by their own approach to their personalities. Double XL lacks the X factor, which could have taken it to the next level, and therefore it lashes out at its own lessons that it was supposed to teach us. Mudassar Aziz and Sasha Singh were totally clueless about the topic, its exploration, its presentation, and its outcome.

Double XL has good music that does not feel boring. A couple of songs sound so nice in these situations. Milind Hog’s framework is average, while Abhisek Anand’s editing skills seemed a little less than what was needed. The director, Satram Ramani, picks a taboo subject to tell a mainstream entertainer, and believe me, it’s a big mismatch. If you are attending a show on a taboo subject, be truthful about it; it is better if the mainstream audience gets the kind of entertainment they want. You do justice to your topic, and they’ll be forced to like your vision. Ramani’s direction is far away from this basic sense. Actually, it’s highly immature. No emotional connect; no worthy drama; no sensible character; no USP; no hard hitting speeches; no understanding between the subjects and how they reflect. Not sure if he was really interested in making a film on such a brave topic or just wanted to make another flop.