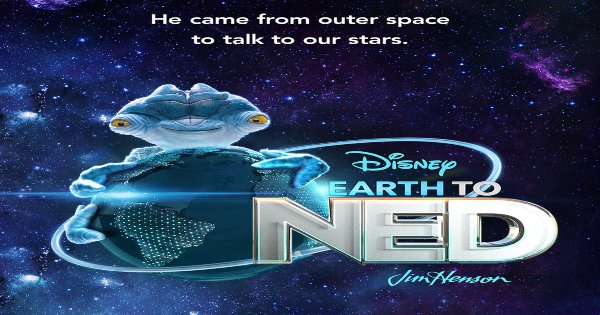 When The Muppets returned to Disney+ a few weeks ago with the new series Muppets Now, I found myself disappointed. While it was somewhat fun to see all of Jim Henson’s beloved characters in a new project, they don’t work as well when they’re mostly separated from each other in their own YouTube-style web shows, and something felt off about the comedy. Thankfully, another Jim Henson production is coming to Disney+ starting later this week, and this feels more in line with the kind of laughs that The Muppets used to deliver on television a long time ago.

Earth to Ned is a new unscripted talk show hosted by a huge four-armed alien commander named Ned (voiced by Paul Rugg) and his pig-snouted, mole-like lieutenant Cornelius (voiced by Michael Oosterom). In case you hadn’t already assumed (or somehow avoided the headline), they’re puppets from The Jim Henson Company. They were previously assigned to invade Earth, but instead, they’ve become obsessed with our pop culture and are now trying to learn as much about it as they can on their own talk show that broadcasts from inside their spaceship hidden deep beneath the Earth’s crust. Though it gets off to a rocky start, it quickly becomes a quirky and fun series replete with candid, improvised, and entertaining conversations with celebrity guests and a vibe that hearkens back to Space Ghost: Coast to Coast and Martin Short’s Primetime Glick with Jiminy Glick.

With the help of their ship’s artificial intelligence BETI (looking like a female Zordon from Power Rangers) and a group of scrawny, hairy, sharp-toothed little creatures known as CLODS (Cloned Living Organisms of Destruction), Ned and Cornelius bring in guests like comedians Andy Richter, Kristen Schaal, Paul Scheer, and Reggie Watts, TV stars like Gillian Jacobs and Rachel Bloom, horror director Eli Roth, and even Star Wars legend Billy Dee Williams to have improvised conversations about comedy, social media, music, fashion, ghosts and whatever comes to Ned’s mind. Those are just a smattering of the guests featured in the five episodes provided to us in advance, and there are many more in the first season’s full 10-episode roster.

The first episode of Earth to Ned starts out pretty rough, and it immediately had me rolling my eyes and dreading the four other episodes at my disposal. The first guest is Andy Richter, and it feels like he’s hamming it up too much as he’s asked for tips about hosting a talk show, resulting in something akin to an over-the-top Disney Channel production. It might just be because he has the added responsibility of setting up the show’s premise and letting both the audience and the writers get a feel for how the show should be executed. But the first episode as a whole feels clunky, and the conversations have far too much of a scripted feel despite the fact that this is supposed to be an unscripted talk show. Thankfully, it gets significantly better with the second guest Gillian Jacobs, who still puts on the theatrics a little too much, but has a much more natural and funny chat with Ned and Cornelius. The show feels like it’s finally starting to find its footing when Jacobs plays a game with Ned where she tries to impersonate the voices of various alien species that she’s never heard before.

The show is at its absolute best when guests have no problem carrying on a conversation with a big alien puppet and making it seem like they’re talking to any other late night host. Comedy Bang Bang co-star and The Late Late Show with James Corden band leader Reggie Watts steals the entire show in his guest appearance on an episode that is all about Star Wars (yes, there are some self-promoting guests and themes to be expected from within The House of Mouse). He’s the most genuine guest of the line-up I got to see, and he has no problem engaging with Ned in a way that’s entertaining and funny. The two have a particularly hilarious moment where they start rhythmically repeating John Boyega’s surname and then proceed to use it as a phrase of approval during the rest of the interview. Then Watts does one of his signature improvised musical sets that he creates using only his voice and a looping machine. It’s mesmerizing, and it’s when Earth to Ned feels like a legit talk show.

But in that same episode, you see how the improvised nature of the guest segments can be just a tad awkward when Billy Dee Williams makes an appearance. Once the show had established its vibe, I was wondering how Williams was going to jibe with the series. It’s not that the Star Wars legend is stuffy or doesn’t know how to have fun in this situation, but he’s just a little slow to react, and seems like he’s just along for the ride as opposed to actively engaging. Thankfully, he’s not grumpy like Harrison Ford probably would be, but Williams also isn’t really trying to put on a show, and he gets oddly serious at the end of the interview when asked what scares him the most. It doesn’t stop the show dead in its tracks, but it certainly slows things down.

After the premiere episode, every single guest that followed was absolutely delightful. Even Taye Diggs, who seems to be living at Jim Henson’s production company nowadays, is more lively and entertaining here than he was when paired with Miss Piggy on Muppets Now. There’s a fluidity and authenticity to how Diggs interacts with Ned that just wasn’t there with Miss Piggy. Maybe it’s because he’s actually talking about part of his career in musicals instead of just sitting around without offering much insight or or humor. No matter what the reason, it only further cemented my frustration with how Muppets Now floundered.

In between guests, there are occasionally in-the-field or on-the-street kind of segments where Cornelius is beamed out of the spaceship into the real world to talk to people like late night talk show writers about how to deal with guests and the host. Another has him learning the ropes of stand-up comedy, or paying a visit to the Hollywood Cemetery. These are hit or miss, mostly because the subjects sometimes lack the ability to speak to a puppet and not have it sound like they’re performing. These segments are well-produced, but not as spontaneously funny as something like Triumph the Insult Comic Dog speaking to real people on the streets, but Cornelius is an enjoyable enough character that these bits aren’t a total loss.

Where the show stumbles most is in the scripted bits. Throughout the episodes, there are gags that simply fall flat, such as when the CLODs stage a musical production or when BETI tries to start a podcast. But at the same time, there are solid bits where a Roaster Toaster keeps cracking jokes at Ned’s expense or the CLODs engage in a lightsaber battle, where one of the show’s voice actors somehow does a pitch perfect impression of Sir Alec Guinness if Obi-Wan Kenobi spoke in a gibberish alien voice. Every episode also always ends with Ned sending off a broadcast to update his home world and Admiral Daddy on their mission. They’re YouTube-style diaries, and they’re never all that amusing.

Overall, Earth to Ned turned out to be so much better than I anticipated. It has some impeccable oddball humor thanks to Ned’s bubbly, affable personality that shares a lot with Martin Short’s Jiminy Glick character. He’s not quite as bumbling or inappropriate, but he has the same kind of energy and flamboyancy that is infectious to the guests he’s interviewing. The playful dynamic between Ned and Cornelius is on par with that of Conan O’Brien and Andy Richter, though Cornelius offers much more commentary and his quick reactions, one-line retorts, and back-and-forth with Ned bring some of the biggest and most surprising laughs. But perhaps the more accurate comparison would be to Space Ghost and Zorak from Space Ghost: Coast to Coast.

As much as I enjoyed Earth to Ned, I couldn’t help but wonder who this show was made for. The roster of guests don’t seem enticing enough for young audiences, especially when the credits they mention are often shows that kids would have no knowledge of, but the comedy also isn’t edgy enough to convince audiences to watch a big alien puppet host a talk show. It’s like a lost show that was meant to air in the 1980s, or something that Nickelodeon might have aired in their golden years. The simplest way to describe it is ALF meets The Tonight Show. But the more I think about it, the comedy line that Earth to Ned is dancing around is right on par with what The Muppet Show used to deliver back in the 1970s. It’s goofy and broad enough to make kids laugh, but clever and satirical enough to crack up the adults too. Since The Muppets don’t seem to be cooking up the same kind of laughs they used to have the secret recipe for, perhaps this alien sent here to destroy Earth will actually be our savior.