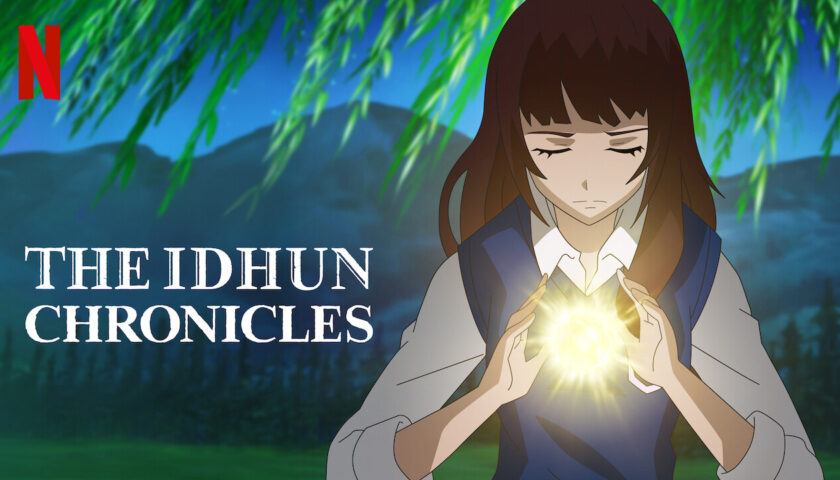 The Idhun Chronicles marks a minor benchmark for Netflix: its first-ever Spanish anime production. Based on Laura Gallego’s popular trilogy of YA novels, The Idhun’s Memories, the five-episode series diversifies the streamer’s anime content as far as creators go — but as a wizards-and-unicorns-and-dragons saga, it may need to work hard to stand out among many such fantasy offerings.

Jack (voice of Itzan Escamilla) rides his bicycle on rural roads. Outside the farmhouse, a dog sniffs the air; there’s a flash, two figures appear and the dog cowers. Jack turns into the circle drive, enters the house and finds his father seated in front of the TV — dead. His mother is dead too, at the hands of two cosmic traveler-warriors, Kirtash (Sergio Mur) and Elrion (Christopher Corey Smith). Suddenly, two heroic battlemeisters arrive, Shail (Nico Romero) and Alsan (Carlos Cuevas), staving off the evildoers by conjuring energy balls and wielding space swords. The two good guys snatch Jack and grasp hands and zap themselves off to god knows where.

Jack wakes up from a nightmare populated by flying space dragon snakes. He’s in a strange place, but at least there’s a stand-up arcade-style video game called Moon Invaders in the room. Like a fool, he doesn’t play it. Shail and Alsan formally introduce themselves, and realize this 13-year-old kid doesn’t know shit about shit about what’s going on. They hand him over to Victoria (Michelle Jenner), who unloads exposition like an overflowing garbage truck at the landfill, and forever transforms Jack’s life into a Weekly World News headline: MY PARENTS WERE ACTUALLY MAGIC SPACE PEOPLE!

Apparently, Jack’s ma and pa hailed from a world called Idhun, but settled on Earth so they could pretend to be a boring nuclear family. Bewildered, Jack wanders into a mysterious thaumaturgical room and touches the giant crystal ball in the center, which transports him into a vision: He can fly! Alongside dragons! And they’re good-guy dragons! Then the dragons burst into flames as the bad-guy flying space dragon snakes — the same one from his dream — attack. Victoria explains some more: he just saw what happened three years ago when a very bad guy named Ashran wrested power in Idhun, eradicating all Idhunians. He’s been hunting down the stragglers wherever they hide, which is what happened to Jack’s parents. Now, Jack and Victoria and the others hide out on Limbad, an in-between world where it’s always night because TIME HAS STOPPED. Neat! The kid refuses to believe all this nonsense, but soon realizes he can’t just leave. He looks at his phone, the battery dies, and he bursts into tears. We’ve all been there kid. OK, maybe not freshly orphaned and stuck in a cosmic oblivion zone, but in the fragile emotional state where we can’t compulsively refresh Instagram every 84 seconds.

Meanwhile, in a castle guarded by lizard men in clothing, Alsan and Elrion squabble, because that’s what bad guys do after they just blew it. Alsan looks at a photo of Jack and his parents. “Wherever you go, I’ll find you,” he says for nobody to hear, although nobody is actually us, the people watching this stuff.

Idhun in a nutshell: The premise is fine, the animation is fine, the characters are fine, the action is fine, the exposition is… well, it’s burdensome, but not always wearisome. There isn’t much in the way of charismatic heroes or villains or visuals in the first episode to compel us to keep watching, and the metric ton of conceptual explainery leaches the mystery out of Jack’s what-the-hell-is-going-on story. Is he a boy of destiny? Dunno, but he’s definitely trying not to get killed, which is understandable. We can all relate to not wanting to die. But is that a significant amount of narrative meat to justify enough mythy worldbuilding to choke legions of chimeras and gryphons?

AND WHEN DO WE GET TO SEE THE UNICORNS? One-fifth of this series has passed without a single unicorn visage, only the talk of unicorns. Will we hang with Jack the Dull Boy’s (So Far, Anyway) story in hopes of seeing unicorns necromantically reanimated? Crimony, I can’t answer that question.