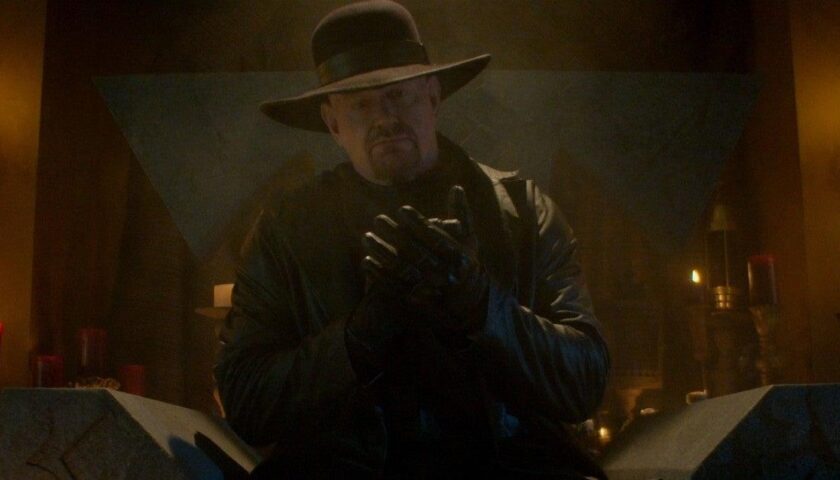 Netflix’s upcoming WWE-produced Escape the Undertaker is a choose-your-own-adventure interactive special that, despite its spooky haunted house setting, looks to embrace a goofy, tongue-in-cheek tone that might actually benefit these types of projects. The film follows the decorated and extravagantly zany tag team the New Day as they try to find their way through the creepy mansion of legendary superstar the Undertaker, and promises a comedy bent that could be the sort of spark these Netflix originals need.

Escape the Undertaker might be billed as an interactive Halloween special, but the trailer makes it clear that the WWE-themed feature will be more fun than frightening. The plot sees the New Day, comprised of Tag Team Champions Big E, Kofi Kingston, and Xavier Woods, seeking to harness the power of the Undertaker’s supernatural urn for the “power of positivity.” Little do they know that the Undertaker has booby-trapped his abode in order to use the “souls of the good” for the urn himself. The premise is unmistakeably silly – but so is arguably the entire concept of a choose-your-own-adventure movie.

It’s part of the reason why Black Mirror: Bandersnatch – a much more straight-laced and serious attempt at bringing interactive drama to home television screens – received mixed reviews. While critics praised the way the special seamlessly integrated the branching choices into the narrative flow, they also pointed out the tedium that developed once the initial thrill of the gimmick started to wear off, especially once they realized a bulk of the options didn’t actually have any direct consequences. Bandersnatch’s approach to experimental story design may make for compelling commentary on free will and self-autonomy, but it also may suck the fun out of the gimmick. In contrast, Escape the Undertaker looks to be a lot less intellectually stimulating but a lot campier, clearly focusing solely on pure entertainment value over narrative design.

It’s too early to say if that will necessarily make for an enjoyable experience, but it is the sort of tone that Netflix’s interactive movies should consider embracing more. The majority of interactive content on the streaming platform is geared towards young children despite Bandersnatch’s adult themes, and while WWE isn’t exactly mature content, the branding does offer more room to play around with the format for a more general audience.

The trailer to Escape the Undertaker seems to suggest that the film will at least partially fall more in line with Netflix’s Unbreakable Kimmy Schmidt interactive special, Kimmy vs. the Reverend. The sequel to Tina Fey’s TV show manages to find the comedy in the choices themselves, molding the different options into the structure of the jokes and poking fun at the format itself. It’s possible that WWE’s foray into interactive storytelling will lean into this strategy considering the trailer’s Saw-like spider trap that gives viewers the option to “join the Undertaker” or “stay positive.”

Netflix is also set to release an entire TV series called Jigsaw (it’s a heist drama with no connection to the horror series) that the platform claims will embrace “truly nonlinear storytelling – meaning viewers are in control.” Viewers can watch the episodes in any order they choose, creating a unique experience for each person who tunes in. That format might work better for drama, too, since it focuses more heavily on the plot and character development that was perhaps sloppily handled in Black Mirror: Bandersnatch. In the meantime, WWE’s Fear the Undertaker is a cheeky alternative that should embrace the sillier side of the choose-your-own-adventure experience.