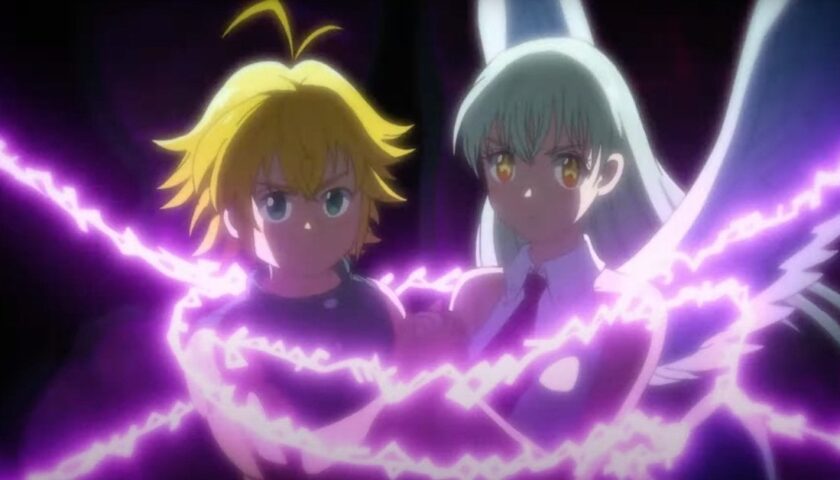 After a successful five-season run, ‘The Seven Deadly Sins’ anime franchise started working on a new animated film titled ‘The Seven Deadly Sins: Cursed by Light.’ The film was initially scheduled to open in Japan in October 2020; however, it was pushed back due to the global coronavirus pandemic. ‘The Seven Deadly Sins: Cursed Light’ however debuted in Japanese theatres on July 2 to critical acclaim grossing over ¥122 million on its opening weekend and will now reach the rest of the world as a dubbed and subtitled version will be streaming on Netflix from October 1. The title features an all-new story still based on Nakaba Suzuki’s Manga series of the same name and picks up after the events of the Holy War witnessed in chapter five; ‘The Seven Deadly Sins: Dragon’s Judgement.’

As mentioned earlier, the story takes place after the events of the fifth entry. Humans, goddesses and fairies, all with the help of the Seven Deadly Sins, manage to win the Holy War against the Demons. The Deamon King is finally conquered, however not without some casualties as the Lion Sin of Pride Escanor dies in the epic battle.

With all the troublemakers and dangers gone, the world is finally at peace, so now the Deadly Sins don’t have to stick together anymore unless they want to. Meliodas, who was on the verge of becoming the Demon King in the last season, travels to a place of heart warming memories with Elizabeth. While reminiscing, he runs into his younger brother Zeldris. However, peace on earth doesn’t reign forever as soon a new threat in the form of fairy sprouts forcing the Deadly Sins to reunite once more to bring down the new enemy.

There are definitely multiple battles throughout the movie; however, the main one remains the stand-off against the Supreme Deity. The title heavily focuses on the aspects of family and emphasizes the acquired family phenomenon, which is pretty common amongst the characters as compared to biological ties. There is no doubt that all the Sins have a tight-knit bond amongst themselves, and they all trust each other.

Furthermore, they have fought numerous brutal battles together and won over the years. The relationship between Meliodas and his brother Zeldris is pretty strained, though, and is somewhat the main highlight of the movie. Now that the Deamon King is gone, Zeldris is the one next in line, and it is pretty clear that Meliodas’ loyalty lies with Elizabeth, who has been his love interest throughout the series.

As fans would recall, Meliodas was a baddie in his past life who fought really hard to overcome his evil side. He decided to mend his ways and abandoned the demon world in order to keep humanity safe. This decision didn’t sit very well with his fellows straining his reputation among the nasties as they all consider him a traitor. He also brought the demon King to his knees, which makes him enemy number one among the demon elite. Through his own admission, audiences learn that his relationship with his father was highly estranged and blames himself for not being there for his little brother and not playing the role of a big brother when he greatly needed him.

‘The Seven Deadly Sins: Cursed by The Light’ uses this enlightening realization as a turning point for the siblings. Meliodas is open to second chances and trying to salvage his relationship with Zeldris who is having none of it. The old saying that blood is thicker than water literally comes into play when despite Zeldris not wanting to repair his torn relationship with his brother, he accompanies him to Britannia to fight the war against the Supreme Deity.

Still strong on its aspect of families going beyond biological relations, audiences learn that the looming enemy, The Supreme Deity herself, is indeed Elizabeth’s mother. This doesn’t make Elizabeth side with her because she is family. Instead, she teams with those she has always worked and spent time with. Those who have become her closest relations over the years. These are the same friends who have offered her a shoulder to cry on in times of need and have relentlessly and unconditionally loved and supported her for a long time. She joins Meliodas and, together with the other Sins, the Supreme deity’s reign just like the enemies before her crumble to her demise.

Meliodas and Elizabeth finally get their happy ending as they get hitched in front of all their friends and family. The rift between the groom and his brother also appears to fizzle out or is on the way to being fixed as the two can even afford to share a drink while having a pretty normal conversation, although they couldn’t see eye to eye before. To show that he is willing to try and give their brotherhood another chance, too, Zeldris invites his big brother to the Demon Realm so they can spend some more time together and make up for the lost time as they continue working on their relationship.

The story is intriguing. The art and animation are top-notch and awesome new characters were also introduced. Some of those series regulars also got more screen time and audiences got to learn more about them. It is an absolute visual treat that will entertain and satisfy avid fans of the series and the manga as well as newcomers to the franchise.

‘The Seven Deadly Sins: Cursed By The Light’ movie is now streaming on Netflix.