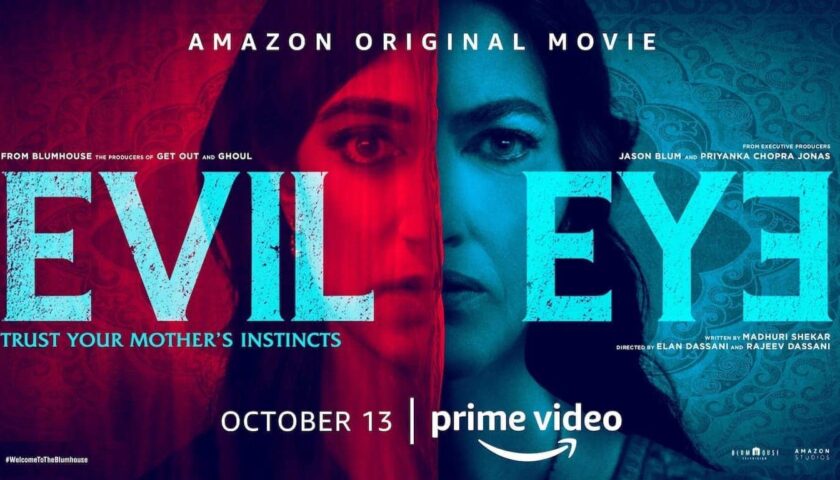 Sarita Choudhury stars as a mother whose fears for her daughter’s impending marriage draw her from New Delhi to New Orleans in Elan and Rajeev Dassani’s thriller, part of Amazon’s ‘Welcome to the Blumhouse’ series.

Amazon corporate synergy pays off in Evil Eye, a suspenseful thriller adapted by playwright Madhuri Shekar from her audio drama, which was a hit for the streaming giant’s Audible platform of spoken-word entertainment. This new iteration fits smoothly into Welcome to the Blumhouse, a series of original genre films by culturally diverse emerging talents, in this case marking a confident feature co-directing debut for Indian American twin brothers Elan and Rajeev Dassani. The standout element of Evil Eye, however, is a riveting star turn from veteran Sarita Choudhury as a superstitious mother whose concern for her daughter spirals into a violent nightmare as past lives pierce the present.

Asian spiritual concepts of reincarnation and karma breathe invigorating, culturally specific supernatural elements into what’s basically a story of a meddling mother, anxious that her daughter is approaching 30 and still single, and then frantically opposed to her union based on terrifying bulletins from her own haunted psyche. That makes Usha Chatri a welcome meaty role for an actress in her 50s, and the magnetic Choudhury bites into her complexities with a mesmerizing balance of flinty determination and edge-of-insanity obsession.

Usha’s years living in America with her academic husband Krishnan (Bernard White, excellent) before their return to Delhi also add nuance to the cross-generational immigrant story. She’s too worldly for her beliefs to be easily written off as mystical claptrap. The vivid backstory conveyed in memory flashes that begin with the violent opening images makes her fears very real, even before the pieces come together to confirm the connection with her daughter Pallavi (Sunita Mani, GLOW) in New Orleans, almost an hour into the film.

One disappointment in Shekar’s script is its failure to make more of the Louisiana setting. Some echo between the rich cultural superstitions of New Orleans and those of India might have elevated the story into the distinctive horror sphere that Jason Blum’s genre factory has occupied with such success. There’s a mild imbalance between the saturated colors and dreamy atmosphere of the Delhi scenes and the comparatively flat-looking New Orleans interludes, which could be Anyplace, U.S.A.

This extends to the compelling trajectory in India of Usha’s progression from gnawing doubts through cold-sweat panic as the extent of her emotional and psychological damage becomes clear and she sees a dangerous pattern of abuse repeating itself in her daughter’s life. The domestic scenes between Usha and Krishnan have both humor and urgency as he initially dismisses her worries as paranoid mumbo jumbo and then starts to become afraid she’s losing her mind.

By contrast, the accelerated courtship of Pallavi and rich, handsome stranger Sandeep (Omar Maskati) in New Orleans feels more routine and the younger actors less interesting. But when the two worlds come together the film ratchets up the tension as it builds to an exciting climax with a satisfying payoff.

Usha’s fixation with the evil eye as a talisman to ward off misfortune provides a motif that links her prayer altar at home in Delhi to the bracelet she insists Pallavi wear for her own protection. In early scenes, Choudhury makes her character’s intrusiveness amusing as she plays matchmaker, combing the internet for a suitable mate for her daughter in a city with a relatively small Indian population. Pallavi reluctantly agrees to one of her set-ups, but when the prospective partner is late to their café appointment she gets into a conversation with Sandeep, whose relaxed charm makes him seem perfect boyfriend material.

The speed with which he moves — giving her expensive jewelry for their one-month anniversary, relocating her to a better apartment and covering the rent so she can focus on her writing — leaves Pallavi somewhat disconcerted. But she allows herself to be led, pushing back against the cautionary notes of her mother in constant video calls. Usha, meanwhile, starts digging into Sandeep’s history, finding disturbing information that dovetails uncannily with an abusive relationship from her college years. Krishnan blames their move back to Delhi for stirring up bad memories.

Editor Kristina Hamilton-Grobler does an agile job of jumping back and forth across continents and from present to past, as fragments of the disturbing chapter of Usha’s younger years come together. Choudhury walks a captivating line between justifiably troubled and hysterically unhinged, with the Dassanis mixing in some stylish visual effects to keep a question mark hanging over her fears. Ronit Kirchman’s ominous score is also effective at blurring the line between reality and the red flags of a scarred mind.

In a key role that requires a cloak of ambiguity for much of his screen time, Maskati could be a more forceful presence. But there’s a chilling glint in his eye when Sandeep speaks for the first time on the phone to the mother of his fiancée, with a familiarity that amplifies Usha’s suspicions.

Even if all four principals are not at the level of seasoned pros Choudhury and White, this is a taut thriller that remains engrossing, deftly blending elements of romance, cultural division and supernatural menace into a family drama with a poignant mother-daughter focus. It’s also a handy reminder that when in danger, tossing a handful of chili powder in the eyes of your aggressor is a smart move.

The film premieres on Amazon Prime Video Oct. 13 alongside Zu Quirke’s Nocturne. Two other titles in the Welcome to the Blumhouse series, The Lie and Black Box, dropped Oct. 6.