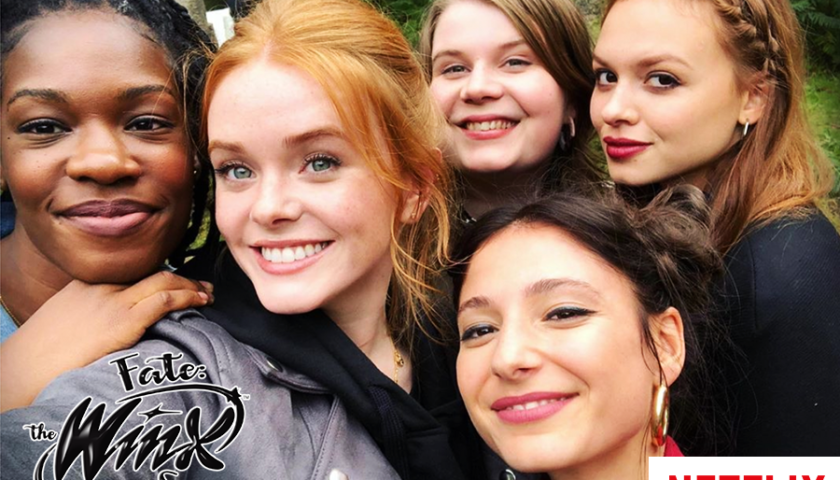 It’s hard to adapt a children’s show—especially when you’re trying to “age it up” for an older audience. Netflix has tried to do exactly that with Fate: The Winx Saga, a tale about fairies trying to balance their magical destiny with romance and homework. But can you really turn a fairy show for preschoolers into a sexy teen drama? All wings point to no.

Fate: The Winx Saga stars Chilling Adventures of Sabrina’s Abigail Cowen as Bloom, a teenager from California who discovers she’s actually a fairy. In this show’s universe, fairies are the ruling class of a magical place called Otherworld and attend a school called Alfea. Each one controls a unique element (their society also used to have wings but lost them at some point in history, though I’m guessing that’s more of a show budget thing). Bloom, a fire fairy, is recruited to a magical school to hone her magic, where she makes friends with her fairy roommates; light fairy Princess Stella (Hannah van der Westhuysen), water fairy Aisha (Precious Mustapha), earth fairy Terra (Eliot Salt), and mind fairy Musa (Elisha Applebaum).

Over the course of the six-episode season, Bloom and her friends attend a few classes, get drunk at parties, and flirt with boys from the adjacent military academy—all while battling a mysterious threat in the form of creatures called the Burned Ones. The creatures seem to be connected to the main conflict of the season, which is about Bloom investigating her true origins and their link to her powers. It manages to feel simultaneously slow and rushed, with uneven pacing that never quite manages to resolve itself by the end. There were times I was super bored and tuned out, only for the next scene to jump in with a bunch of big events or expository dialogue that took me by surprise.

It’s also really dark. Not only do the Burned Ones leave a lot of bloody corpses in their wake (RIP sheepies from the opening scene), but there’s a substantial amount of sex and drugs and other “adult” content. I swear Fate can’t go three minutes without someone throwing out an F-bomb. All of that isn’t weird on its face, since showrunner Brian Young worked on The Vampire Diaries, but it is strange when you consider the origins of this show. Allow me to explain.

You see, Fate: The Winx Saga is actually an adaptation. Winx Club was an animated series from Iginio Straffi about magical fairy teens that started in 2004, got dubbed in English, and ran for years on various American networks like 4Kids and Nickelodeon (its latest season ran on Netflix in 2019). It started out for older kids but eventually became fodder for preschoolers. It also stands as one of the most successful shows in Italian television history—it even had its own theme park attractions, at least until they were taken down last year. All the characters, including Bloom, her dull-as-dirt love interest Sky (Danny Griffin), and her fairy friends, are live-action interpretations of existing characters but what was a bubbly magical girl show stands in stark contrast with the gloomy and brooding teen adaptation we get with Fate: The Winx Saga.

The biggest character change so far has been turning the three evil witch characters, collectively called the Trix, into a single femme fatale named Beatrix (Sadie Soverall)—and dear lord did she ever get on my nerves. This show is certainly nothing like the original but since I didn’t grow up with it, I watched the first episode of Winx Club to compare. I’ve got to be honest: Winx Saga might be one of the strangest adaptations I’ve ever seen. I’ve never seen a spinoff diverge this suddenly and intensely from its source material. It reminded me of that Dora the Explorer sketch from Funny or Die.

Okay, let me be fair: This show isn’t bad. In many ways, Winx Saga is decent. The writing is serviceable, giving us some of that Vampire Diaries and Legacies teen magic drama that Young is known for. The smaller character moments between the girls were the strongest, as the actresses seemed to genuinely like each other. Though the highlight was the fact that it was shot on location in Ireland. We get some gorgeous shots and vistas that are, to be frank, magical. Makes me lament not being able to travel. Damn covid.

The other shining grace is Cowen herself, whose awkwardly confident yet conflicted portrayal of Bloom makes me wonder whether she would’ve been a better choice to play Sabrina Spellman on Chilling Adventures of Sabrina. She’s way better here than what she was allowed to be with Dorcas, and I hope to see a lot more from her in the future. While the male characters were so cookie-cutter generic it felt like an episode of Bridgerton, I thought Bloom’s fellow Winx Suite roommates had potential, namely van der Westhuysen and Salt as Stella and Terra. But I was disappointed with how they turned Mustapha’s Aisha into Bloom’s glorified helper, without giving her a story arc of her own—especially because she was the main Black protagonist.

In fact, the show has some diversity issues that would need to be addressed in a possible second season. For example, some were upset that the original series’ Flora (now Terra)—a character whose design was inspired by Jennifer Lopez and fans identify as Latina—was played by a white actress. It was nice to see some body diversity in the show with her character, considering how Winx Club was criticized for impossible beauty standards by the Geena Davis Institute on Gender in Media, but that doesn’t change the fact that the cast is overwhelmingly white. There was also some complicated and weird LGBTQ representation that I didn’t understand; All the girls we see get romantic have been in straight, heteronormative couplings, and the only queer relationships have been with villainous characters being mean and horny. We still don’t know every main character’s preferences, so that could change.

Overall, Winx Saga just never manages to spark. This would be bad enough under normal circumstances, but given how little the show has been promoted by Netflix—and how far it strays from the show that kids grew up with—it puts the series at a major disadvantage. It had a lot of obstacles to overcome and really needed to rise up from its roots and give us something amazing. That didn’t happen. It’s no Kipo and the Age of Wonderbeasts. Word of mouth isn’t going to save it, and Winx Club fans probably won’t either. I wouldn’t be surprised if they revolted against it. They might be at the right age for a teen-friendly Winx, but our nostalgic lenses don’t always look kindly on a beloved kids’ show “going dark.”

I’d be hard-pressed to see Fate: The Winx Club get another season. Hopefully, that doesn’t mean the end of Cowen’s career, but I’m guessing this will be the start and end of Alfea. Fate: The Winx Saga debuts on Netflix January 22.