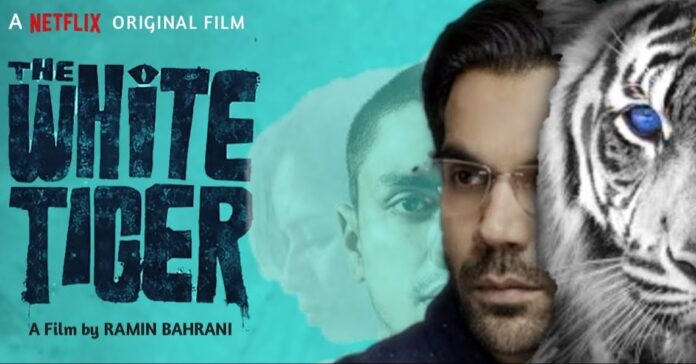 Indian writer Aravind Adiga has always been rather gracious about the social message of “Slumdog Millionaire” — the Chennai-born author has often insisted that the British-produced Best Picture shined a spotlight on the poor of a country whose own popular cinema tends to ignore them. But his 2008 novel “The White Tiger” reads like such a damning critique of Danny Boyle’s slickly subaltern fairy tale that it almost feels like a direct rebuttal.

One is the star-crossed story of a passive kid from the Mumbai slums who gets the girl and lucks his way out of poverty after it turns out that his lifelong misfortunes were actually just preparing him to win the Indian version of “Who Wants to Be a Millionaire?” It’s shot with the percussive energy of a music video, scored by worldwide mega-star A.R. Rahman, and ends with a Bollywood dance number that leaves you with a smile on your face.

The other turns a more skeptical eye towards the impact of globalization on the lower castes, as it follows the Machiavellian son of a rickshaw driver as he claws his way from Bihar to Bangalore in search of personal freedom through capitalism or from it, whichever comes first. It’s flecked with murderous black humor, told with all the subtlety of getting run over by a car, and generally sees Indian society as a giant rooster coop where servants either kill their masters or spend their entire lives waiting in line to get their heads chopped off.

These stories trace similar trajectories, but while they both contend that freedom isn’t cheap, they crucially disagree on the nature of the cost. It’s the difference between “Cinderella” and “Goodfellas,” a difference that could only have been more pronounced if Adiga’s cunning anti-hero had followed some terrible crime by declaring out loud that no poor chaiwallah ever got rich by waiting for some game show to hand him a fortune. In Ramin Bahrani’s fast, lucid, and sometimes faithful-to-a-fault adaptation of “The White Tiger,” that’s exactly what he does.

Bahrani would have been a natural enough fit to direct this movie even if Adiga’s Man Booker Prize-winning debut hadn’t literally been dedicated to him after the two artists became close friends during their time as students at Columbia. His more neo-realistic films about working-class struggles (i.e. “Man Push Cart,” “99 Homes,” and the great “Goodbye Solo”) established a willingness to eschew subtlety in favor of clear social messaging and a satisfying yarn, a tendency that serves his equally blunt source material a lot better here thanks to a pulpy story that’s paced like a bullet and unafraid to leave a bloody mess in its path.

Like the upwardly mobile character at its core, “The White Tiger” works best when it moves quickly and doesn’t bother to look in the rear-view mirror. It opens at full speed, with a flash-forward of three attractive twentysomethings bombing down a barren Delhi boulevard in the middle of the night circa 2007. There isn’t a single clogged pore or care in the world between Ashok (Rajkummar Rao) in the passenger seat and his wife Pinky (Priyanka Chopra Jonas) behind the wheel, but wide-eyed Balram Halwai (Adarsh Gourav) sitting in the back is shedding gallons of flop-sweat as he stares at the dark road ahead. For all Balram’s vigilance, he isn’t able to warn Pinky in time for her to avoid braining the poor little girl who darts out in front of the car. Freeze frame, record-scratch, Balram voiceover: “As far back as I remember, I always wanted to be a driver.”

If Balram doesn’t use those exact words, it’s partially because he’s never cared what job he did so long as it took him out of the “darkness” of India’s poorer states. But, thanks to a second framing device — one that Bahrani may have considered tweaking away from its novelistic origins — we know that Balram eventually makes his way into some fuzzy sort of neon light. The narration that runs through the film isn’t unmotivated, but rather the text of a letter that an older, richer, more pony-tailed Balram is writing to then-Premier of the People’s Republic of China, Wen Jiabao. While the plot choice pays off in spare change two hours later, it immediately establishes the kind of moxie that set Balram apart from the rest of the people in his backwater hometown of Laxmangarh. Some roosters just refuse to wait for their turn on the chopping block.

Of course, Balram would rather think of himself as a “once in a generation” white tiger, and the desperate yet mercilessly self-interested choices we see him make are nothing if not an attempt to manifest that destiny. There’s a familiar energy to the unchecked ambition of Balram’s formative years, but these scenes barrel forward like Bahrani is trying to keep you from clicking the “menu” button, and what they lack in freshness they make up for in local flavor and skin-piercing bite. When Balram schemes to get a job as a driver for the same landlord he watched work his dad to death, revenge is the last thing on his mind — Balram only wants a way up, and he’ll lick the master’s boot with a smile on his face if that’s what gets him there.

He writes to his Chinese pen pal that an Indian entrepreneur has to be “sly and sincere at the same time,” and Gourav’s shifty performance is so compelling because he embodies that idea to the fullest extreme. Even as India roars into the 21st century as a leader on the global stage, people like Balram can only hope to climb above their station through some deviously administered sociopathy. Gourav internalizes that sad way of life to such a degree that it perverts the movie’s entire worldview; you start to question if his worst crimes are wrong, and — even more insidiously — if the generosity shown to him by the landlord’s son isn’t just the rich man’s way of coping with his guilt (Rao plays Ashok as a semi-spoiled tech brat who can’t even hear himself dehumanize the working class into fodder for a potential app).

“Do we loathe our masters behind a façade of love,” Balram asks aloud, “or do we love them behind a façade of loathing?” That distinction only grows less important as Balram starts to chauffeur Ashok and Pinky around the Westernized high-rises of Delhi, as the paralyzed sense of dependency is all that matters. Still, “The White Tiger” is never more addictive or absorbingly concerned with the relationship between circumstances and morality than when it teases the almost sadomasochistic relationship between the Ashok and his pet tiger. There isn’t any clear implication that Balram has a physical desire for his boss, but a certain psychosexual tension abounds — that between a man and the person he wants to become. A single choice of words towards in the way that Balram refers to Ashok towards the end of the film offers a winking kind of closure for a relationship that’s been splintered into broken glass.

For her part, Pinky also has a role to play — first as Balram’s broad-minded, Brooklyn-born, bodega-raised outsider ally who hasn’t totally succumbed to the thinking that lower caste people are worth less than the bags they shuttle across town for their masters. She wants to help as something of a social climber herself, but her efforts to win the hearts and minds of her husband’s servant can only go so far, as the crises teased in the film’s cold open lead to a situation where the question of what kind of person you are is answered by what kind of person you can afford to be (swapping seats and cos-playing different castes in that car is what led to this mess in the first place). It’s an ugly thing to see clearly, but Balram never blinks. He isn’t preternaturally clever enough to have the upper hand in every situation — sleeping in his own room in the industrial garage below Ashok’s apartment building is the closest he’s ever come to heaven — but he knows the rules of the game. He’s often explicitly outlining them for us.

Bahrani’s jagged sense of purpose and his street-level point-of-view allow him to attack this material with the same blunt force of Adiga’s book, and to suffuse it with the sights and sounds required to bring it all to life. Some are putrid, others intoxicating, but together they alchemize into a heady perfume of desperation that only wears off once the action slows down and shit gets real. When things sour for Balram, he doesn’t have enough viable options at his disposable for the movie to waste so much time weighing his next move, and the bloated emptiness of this late-middle stretch flattens Darwinian brutality of the film’s closing moments. Despite the reverent fidelity he shows to his friend’s novel, Bahrani takes his foot off our necks at the story’s ugliest point, and neglects to hazard more than a smirking guess at the book’s lingering question: After a lifetime of hunting for freedom, can the white tiger be satisfied to find itself in a nicer cage?