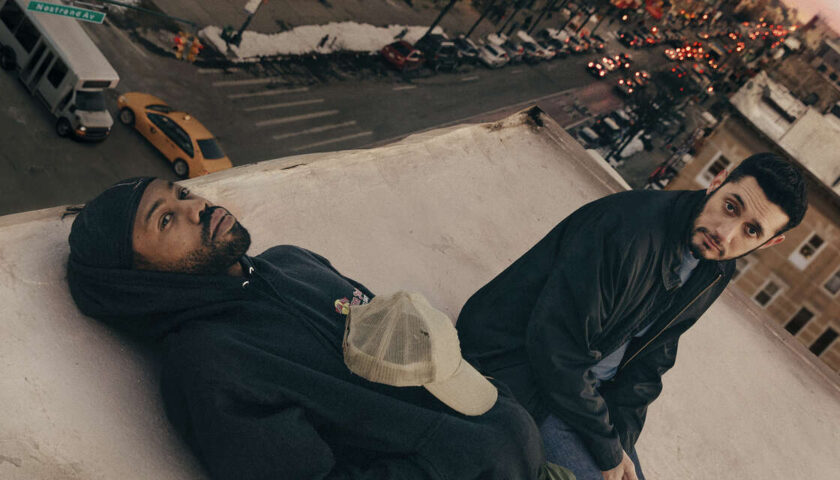 The first scene of Showtime’s new series “Flatbush Misdemeanors” could go in any direction. It features a Black cop confronting another Black man on the grounds of a school, declaring to dispatch that he suspects him to be a “kidnapper or a child predator” and insisting upon searching him. The suspect was just delivering food, and the cop seizes it, stirs it with his pen, and licks it, before chasing after a kid who’s jumped over a fence. Whatever seeming threat there had been in the scene’s earliest moments has been defused; the cop is a goofy annoyance who has just enough power to be pernicious — not the threat he might have been in a different series, but a frustrating part of life in a city trying to figure out what it is.

This gets at what “Flatbush Misdemeanors” is, and what it’s attempting to do. “Flatbush Misdemeanors” is a show that takes on race, gentrification, and a rapidly-changing New York with a laid-back angle of approach; it observes its characters, but doesn’t provoke, instead choosing to wait out situations until they reveal their inherent minor-key looniness. In the tradition of “High Maintenance,” the show frames outer-borough New York as a sort of oddball purgatory, in which our heroes face no situation that can’t be gotten through with a little ingenuity — or simply waited out until the mood shifts.

The fellow delivering food in that first scene, Kevin (Kevin Iso), was meeting up with his friend Dan (Dan Perlman), a schoolteacher. Dan, an anxious and somewhat lost millennial relying on prescription anti-anxiety meds to get through the day, is helping Kevin find his feet — an attempt made more challenging both by Dan’s own crushing neuroses and by various mishaps. Kevin’s day of food deliveries, for instance, gets yet more frustrating after his encounter with the cops; he accidentally destroys a drug dealer’s supply and finds himself responsible for making them whole. The dealer threatens Kevin with violence — but, as a button on the scene, is revealed to be a believer in the Zodiac who dislikes that Kevin is a Virgo. The tension of the moment is layered and undercut with a sort of not-unpleasant irony and quirk: In contemporary Brooklyn, even in a neighborhood far from the endless-adolescence playground that “Girls” depicted, you just never know who is hung up on astrology.

Iso and Perlman, both appealing actors, have an unforced, likable chemistry. This makes the shagginess of the series feel like an honest expression of their vibe, even as it can sometimes lend scenes an unfinished air. Much, for instance, pertaining to Dan’s work and his relationship with his school — in particular, a socially conscious, beleaguered administrator (a very able Sharlene Cruz) — relies a bit too heavily on chaos and misunderstandings. But in the main, the show is doing something interesting, pushing further into a gentrifying Brooklyn than other shows of its ilk and extracting from it a sort of curiosity about the disparate strains of contemporary culture melting together. The idea underpinning “Flatbush Misdemeanors” is expressed in the show’s third episode, in which Kevin’s girlfriend Jasmine (Kerry Coddett), an activist, tells Kevin that he’s a gentrifier too — he may be crashing on a friend’s couch, but he loves oat-milk mochas. He buys them at a Black-owned coffee shop, but, she says, “Black capitalism is still capitalism.”

Sure, the reference, though crisply delivered by the talented Coddett, is a bit tired. (There’s another example of where the show might at times benefit from a bit of tightening up at the writing level.) But the point is well-taken. The show’s Flatbush setting is a microcosm of so many American cities, as longtime residents of color are, if not displaced by white newcomers, then forced to coexist. It’s changing so rapidly and unpredictably that Kevin and Dan can be at once the gentrifiers and those who are suffering from gentrification’s effects. As in the show’s first scene, they’re never really in harm’s way but learning to put up with a city whose hostility to the middle class verges on the absurd. That’s a lot on the mind of a loose and amiable comedy, and I hope that “Flatbush Misdemeanors” continues to find its voice as it explores its richly drawn world.