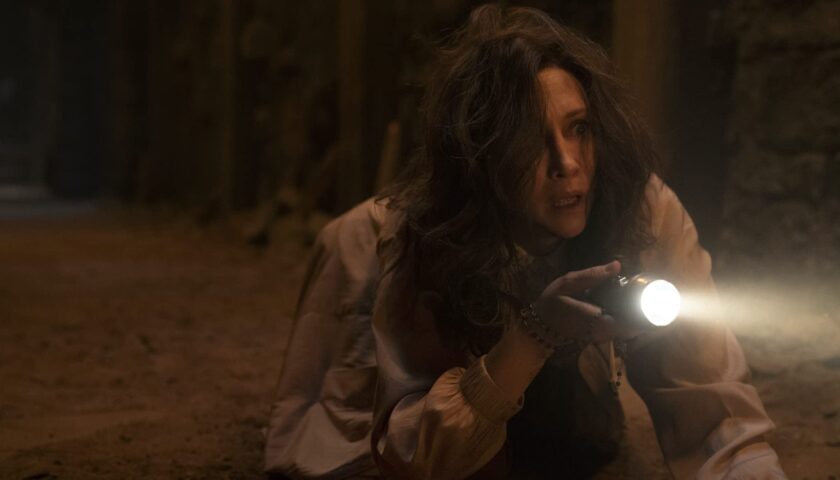 The Conjuring 3: The Devil Made Me Do It 2021 Movie Review Poster Trailer Online

The third installment will once again follow real-life paranormal investigators Ed and Lorraine Warren (Patrick Wilson and Vera Farmiga). The new film would break the pattern of another supernatural possession in a house with a family in peril and will take place in the 1980’s, following a man accused of murder that claims to have been possessed at the time.

In an unprecedented move, WarnerMedia announced today that all of its 2021 films will be debuting on HBO Max on the same day as the films land in theaters, which includes the upcoming The Conjuring: The Devil Made Me Do It. The studio announced last month that Wonder Woman 1984, which was set for theaters earlier this summer, would be the first theatrical release that would debut on the streaming service the same day as it hit theaters, though it still comes as a surprise that their entire slate for 2021 will be embracing this concept. The Conjuring: The Devil Made Me Do It will debut in theaters and on HBO Max on June 4, 2021.

“We’re living in unprecedented times which call for creative solutions, including this new initiative for the Warner Bros. Pictures Group,” WarnerMedia chair and CEO Ann Sarnoff said in a statement. “No one wants films back on the big screen more than we do. We know new content is the lifeblood of theatrical exhibition, but we have to balance this with the reality that most theaters in the U.S. will likely operate at reduced capacity throughout 2021.”

“With this unique one-year plan, we can support our partners in exhibition with a steady pipeline of world-class films, while also giving moviegoers who may not have access to theaters or aren’t quite ready to go back to the movies the chance to see our amazing 2021 films,” she continued. “We see it as a win-win for film lovers and exhibitors, and we’re extremely grateful to our filmmaking partners for working with us on this innovative response to these circumstances.”

The new The Conjuring was previously slated to hit theaters this past September, only for it to become one of many major releases that was delayed until next year in hopes that the coronavirus pandemic had subsided enough that theaters could operate at a stronger capacity. It seems as though WarnerMedia is setting a new precedent that emphasizes access to their films over optimal box office returns, so we won’t be surprised if other studios go this route with their titles.

The Conjuring: The Devil Made Me Do It” reveals a chilling story of terror, murder and unknown evil that shocked even experienced real-life paranormal investigators Ed and Lorraine Warren. One of the most sensational cases from their files, it starts with a fight for the soul of a young boy, then takes them beyond anything they’d ever seen before, to mark the first time in U.S. history that a murder suspect would claim demonic possession as a defense.

The Conjuring 3: The Devil Made Me Do It 2021 Movie Review Poster Trailer Online