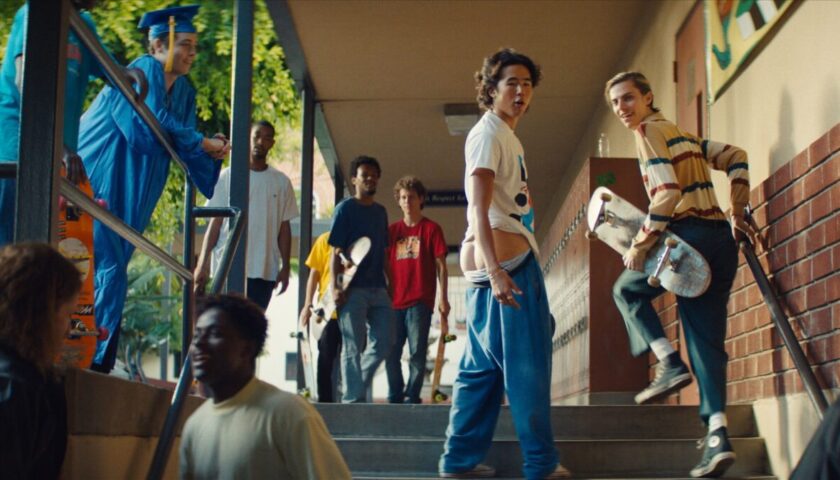 North Hollywood is a coming-of-age tale about Michael (Ryder McLaughlin) in North Hollywood, L.A., whose dream of being a professional skateboarder is challenged by his blue-collar father (Vince Vaughn).

Michael and his father, Oliver, don’t see eye to eye. Michael’s only focus is skating and he’s willing to do anything to achieve it, even if it means sacrificing friendships. Oliver doesn’t not support Michael, but he wants school and work to be his priority. He doesn’t agree that skateboarding is a viable career choice, which, to be fair, is an incredibly tough sport to break into professionally.

Michael’s friendships come second to skating, much like everything else, as he connects with local pro-skaters who recognize his potential and give him the opportunities he’s been fantasizing about. North Hollywood is less about the journey of becoming a pro-skater and more about the value of balancing your goals with your support system. It turns out to be such a beautiful underlying message we all need reminding of sometimes.

Vince Vaughn is the stern, comedic version of his acting scope and is the perfect balance for Ryder McLaughlin’s introverted and naïve Michael. The two have great chemistry and display the nuances of parenting a child. Vaughn’s involvement is there but is quite secondary, so don’t let him be your only reason for watching.

You might recognize McLaughlin from another skateboarding film, Mid90s, yet his character, Michael, is still distinguishable between the two films. Michael comes across as a determined and selfish boy who has much to learn about navigating relationships and a career pathway. But when he has sweet, soft moments with his love interest, Rachel (Miranda Cosgrove), you’re reminded of the complexities of being young. Teenagers have some rapid mood swings from their hormones and development, but they so often have two very distinct personalities: one more moody or aggressive and the other gentle, kind and loving. Michael is a bit of both and you learn to appreciate it at best, and understand it at worst.

Mikey Alfred (writer/director) and Ayinde Anderson (cinematographer) use a unique blend of camera techniques in North Hollywood depending on the scene. When it’s skateboarding time, they use an obvious handheld method, whereas the story elements are filmed more traditionally. Using this combination draws the audience in to feeling truly part of the experience.

North Hollywood is an enjoyable flick if you are invested in this genre, but it also speaks to another message that is a more rare find cinematically. It explores the male friendships with emotion and doesn’t ever shy away from having that conversation. While I wish society operated in this way, Mikey Alfred (writer and director) made an intentional decision to focus on the problems that arise between teenage boys and how communication (or the lack thereof) can impact, destroy, or repair a friendship. This is where I commend the film the most because I appreciate it so greatly.

Much of North Hollywood is by the book, but if you’re looking for a short and sweet coming-of-age film about dreams and navigating male bonds, it’s worth a rental.