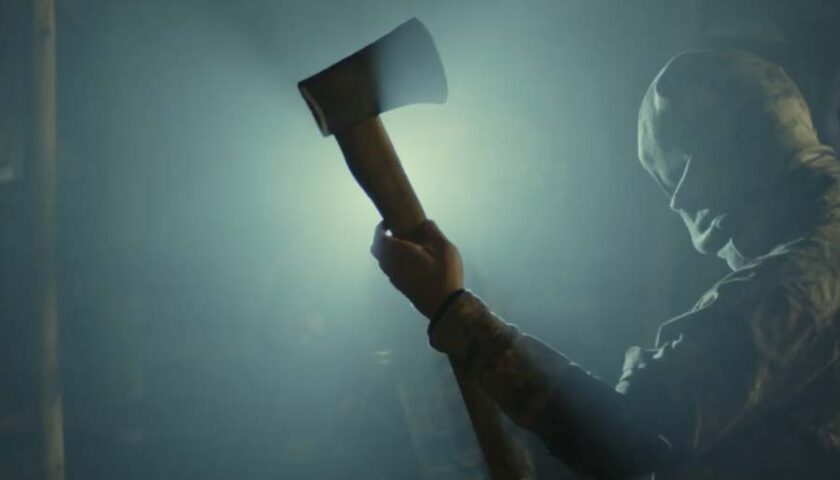 THE RETREAT is billed as a “lesbian slasher.” This needs some clarification. Lesbians aren’t initiating any slashing (this film is all about LGBTQ people as heroes, not villains); moreover, most horror fans won’t consider this a slasher in the regular sense.

There’s a cabin in the woods, where couple Connor (Chad Connell) and Scott (Munro Chambers) are optimistically moving in. Their first invited guests are Connor’s friend Valerie (Sara Allen) and her girlfriend Renee (Tommie-Amber Pirrie).

Renee isn’t keen on a weekend at an isolated location. This is not out of fear of the wild, but because she knows Valerie will want to talk about whether or not their relationship is going anywhere, and Renee isn’t ready for commitment. Neither woman plans on being victimized by a group of homophobic psychos intent on making snuff videos.

Director Pat Mills and writer Alyson M. Richards obviously have their hearts in the right place, in terms of creating more positive LGBTQ characters in horror. The performances are good, and the dialogue works. Unfortunately, they are far less sure-handed when it comes to the antagonists.

Even homophobic psychos with dreams of Internet fame need some explanation. Have these bad guys been up to what they’re doing for a while now, or have they been suddenly inflamed by the arrival of Connor and Scott in the neighborhood? Are they attempting to cover their digital tracks, or are they oblivious to the prospect of the FBI tracing their IP address? Exactly how much time have they had to prepare this?

The filmmakers give us too much on these crackpots to keep them terrifyingly mysterious, but haven’t fleshed them out enough to make them characters. They’re unpleasant without being scary.

Worse than this is what seems to be a problem with the cinematography. While this may be limited to the streaming screener provided to the press – perhaps viewers seeing the film in theaters or pay streaming may get brighter imagery – certain scenes are so dark that it is exceedingly difficult to see what is happening in them.

It’s admirable that people have gotten together with the explicit aim of making a genre film for the LGBTQ community, which tends to get left out of themes other than mainstream drama and comedy. THE RETREAT clearly wants to say something about homophobia, hypocrisy, and the folly of underestimating folks who are undervalued. The movie has its politics in good order, but its horror and overall production qualities fall short of its ambitions.