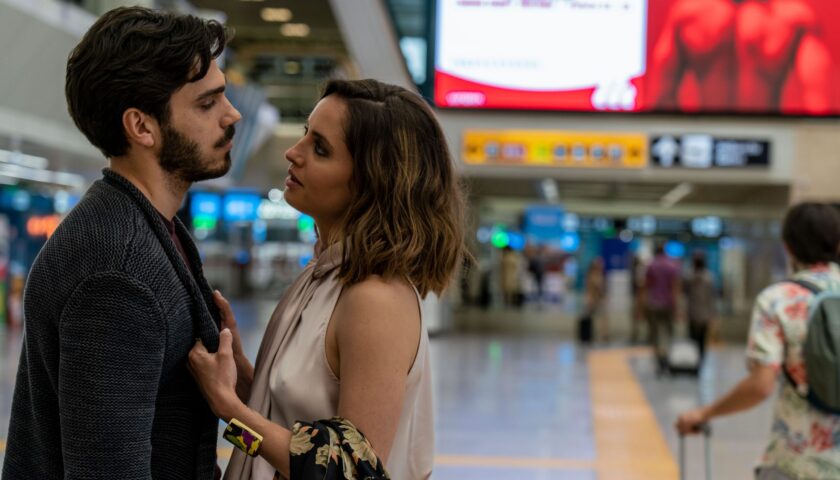 In life, most of us have encountered two sets of people – one those who believe in fate, and soulmates and those who don’t. While the rest of us try to analyze who among the two makes more sense, it truly becomes a matter of convenience at the end of the day. ‘Four to Dinner’ is an Italian rom-com drama that tries to test the theory of soulmates. The film puts forward Plato’s hypothesis that stated – the early humans were all hermaphrodites, and it was the jealous Gods who split them into two halves, that is, the males and the females. The concept of soulmates stems from the idea of finding the other half of ourselves, the one who will be our perfect match.

The film starts with the planning of a dinner party. Luca and Sara invite their friends over for dinner, and we find Luca sharing a profound conversation with Frank regarding the concept of soulmates. Luca refuses to believe in the idea that there exists only one true partner for every human being. He instead proposes that had the reality been different, he might have not been with his partner, Sara, and would have found love in someone else. Frank tries to explain the beauty of the concept of soulmates; this is when Luca and Sara decide to share a story that would challenge the concept.

The story dates back two years ago when Luca and Sara decide to invite four of their friends for lunch. When Luca’s friends Dario and Matteo came in early for lunch, the couple decided to share essential details about Sara’s friends before their arrival. Guilia was a mathematician, whom Luca described as confident and hot, while Chiara was an anesthetist, ‘a girl next door type.’

The friends doubted the couple’s intention as they seemed too keen to introduce their friends to one another. Luca denied the allegation and asked them to simply enjoy the lunch. The couple then narrates four possible outcomes of the little lunch with Frank. The film unfolds the four probable outcomes. One reality was in which Dario would find love in Guilia. Their similar personalities helped in forming the bond though the challenge was to overcome their egos and confess their true feelings. In this reality, Matteo finds comfort in Chiara for the same reason, they were similar. Their relationship was not a bed of roses as well.

‘Four to Dinner’ narrates an elaborate tale to teach the audience an important lesson. In life, it is not important to find ‘your’ soulmate but rather ‘a’ soulmate. Luca wanted to propose to Frank the theory of how we adjust according to the person we find love in. Therefore, the idea of a perfect soulmate becomes obsolete, considering how we change with time and people.

Directed by Alessio Maria Federici, the film is consistent with the confusion of the two realities. At times the space merges, the characters overlap, adding to the sense of disbelief. The idea of how every couple has to adjust, regardless, of their similar or dissimilar personalities, is clearly communicated.

A light-hearted watch with an important thought at its core, ‘Four to Dinner,’ tries to question the popular concept of soulmates that is propagated in a vast number of romantic comedies itself. It is interesting to note how using the same genre, the filmmaker tries to dismiss the concept and instead propose an alternative that is a lot more rooted in reality. With fluid storytelling and an interconnective narrative, the film can hold the audience’s attention.

Though not cinematically brilliant, if you are someone who enjoys romantic comedy films, ‘Four to Dinner’ might be an exciting choice to indulge in the genre. Engaging performances from Matilde Gioli, Giuseppe Maggio, Matteo Martari, and Ilenia Pastorelli make the film all the more entertaining to watch. You might end up questioning your belief in destiny and soulmate after ‘Four to Dinner.’