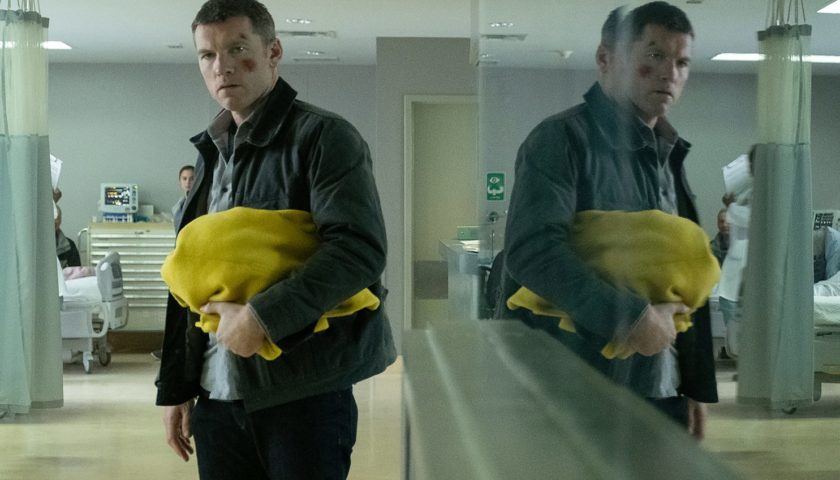 Another disposable Netflix thriller that fails to do anything with its potentially clever premise, Brad Anderson’s “Fractured” isn’t the first modern riff on “The Lady Vanishes” — not even close — but it’s one of the few that finds a compelling new backdrop for that Agatha Christie-esque tale of conspiracy and gaslighting. Whereas a film like “Flightplan” merely elevated Alfred Hitchcock’s locomotive mystery onto an airplane, “Fractured” sews the story into the knotted fabric of the American healthcare system, a curious wrinkle that helps to endow some (very) familiar beats with a fresh palette of anxieties.

“What if a random old woman disappeared on a train?” is now “what if someone’s wife and daughter were digested into the bowels of an understaffed hospital, any evidence of their existence hidden beneath the layers of payments, paperwork, and insurance legalese that drive people in this country to the brink of madness every day?” Alas, the script (by “Ballistic: Ecks vs. Sever” scribe Alan B. McElroy) abandons that vague sense of purpose as soon as the shit hits the fan, and the rest of this dour little movie just hobbles through the motions. The only real deviation from the obvious arrives in the form of a last-minute twist, a reversal so disastrous and self-negating that it almost feels like retroactive justification for the predictability of what came before it.

Anderson is a resourceful genre filmmaker whose best work (“Session 9,” “Transsiberian”) displays a bone-deep understanding of tension and helplessness, and so it’s easy to appreciate what drew him to a story in which helplessness is the source of the tension. Sam Worthington — a capable actor who might be getting a bit too comfortable as the face of these direct-to-Netflix duds — stars as Roy Monroe, a recovering alcoholic whose second marriage is on the rocks. The subtle-as-a-car-wreck opening scene lays it all on the table, as Roy and his wife Joanne (Lily Rabe, wasted on a nothing role) hash things out on the long trip home from a Thanksgiving dinner. “We’re just broken,” she says. “We have been for a long time.” Their young daughter Peri (Lucy Capri) stares out the window in the backseat, oblivious to what’s happening to her family, and how profoundly frustrated Roy feels about his inability to fix the situation. Dads aren’t conditioned to deal with the specter of uselessness, and Roy’s overwhelming need to do something might drive him back to drinking if he can’t pull out of his downward spiral. Given that the snowy world around him is as grim and desolate as his marriage, it’s safe to assume that Roy’s salvation won’t come easy.

That’s when things take a turn for the silly, as a quick rest stop detour somehow leads to a cliff-side confrontation between Peri and a mean stray dog. When Roy tries to intervene by hurling a rock at the mutt — a bafflingly stupid decision that, in fairness, will be relitigated several times over the course of the film — Peri tumbles off the ledge she’s standing on and bonks her head on the ground below. The death-defying race to the nearest hospital gives Roy a golden opportunity to prove his paternal value, but even the father of the year wouldn’t be able to get his kid to the front of the line once they got there.

The system seems designed to frustrate desperate parents, and Roy loses his cool from the moment he meets the coldly insensitive receptionist at the check-in desk, who irritates him with questions about his wife’s insurance and insists that Peri be listed as an organ donor. A quivering mess of male impotence, Worthington helps split the difference between Roy’s desire to help his kid, and his co-equal need to prove his own worth. He’s like a starving animal looking in every direction for something he might be able to digest. Is it shady that one of the hospital workers gives a wad of cash to a paramedic who delivers an organ for transplant, or is Roy just paranoid? Is it ominous that Peri’s genial doctor (a blink-and-you’ll-miss-him Stephen Tobolowsky) tells the girl that she’s got “the most beautiful eyes I’ve ever seen,” or is he just trying to put her at ease? When Roy wakes up from a nap to discover that his wife and daughter are both missing, and that the hospital staff claims they aren’t there, he jumps to the most sinister of conclusions.

From there, “Fractured” becomes a thriller every bit as generic as its title. Overcome by a labyrinth of dimly lit white hallways (and the cast of stock characters who walk down them), Anderson struggles to rescue any genuine substance from Roy’s search. The sheer weight of Worthington’s mounting desperation is able to keep things moving for a while, but it isn’t long before the film devolves into a limp turnstyle of scenes in which Roy demands to know where his family is, and shadowy hospital employees — none of whom are granted actual character arcs — insist that he’s crazy.

The stakes escalate along a murderously familiar trajectory as Roy grows more and more convinced that foul play is afoot, and each new step is a bit less specific than the one before it. “Flightplan,” for all of its flaws, was forced to lean in to its one major location, as every part of an airplane is fundamentally different from its earthbound equivalent. A hospital, on the other hand, just becomes another dingy building when you strip away the system that it’s there to uphold. There are any number of ways that “Fractured” might have played with the exasperation of receiving medical care — not just the prohibitive cost, but also the powerlessness that comes with an institution that’s biased against certain patients — but it’s all too eager to devolve into repetitive shouting matches and bland skullduggery.

A first act suggestion that a person “will do anything for their family” teases a potentially compelling story about the moral compromises of privatized medicine, but the movie’s endgame twists that idea into such a gaseous mess that it doesn’t even work as a demented bit of fun. “Fractured” might be sharper about a broken man than it is about the broken system that ensnares him — and the creative team is able to recognize that — but the movie is so dull on both sides that the right diagnosis isn’t enough to save it.