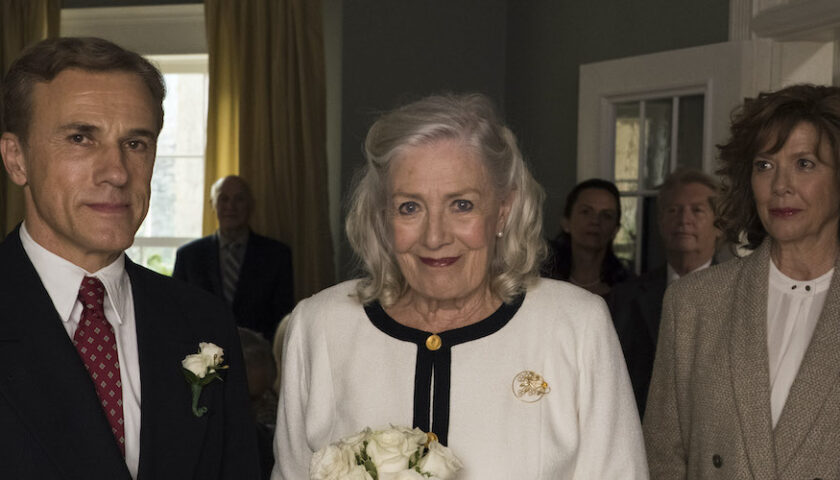 “Georgetown,” inspired by a real story of fraud and murder among the wealthy and powerful in the toniest neighborhood of Washington DC, focuses too much on the how and not enough on the why. Not the why of the money, power, and the deference that accompany them; we do not need any help understanding why anyone would want all of that. Or why people of accomplishment and privilege would fall for some sketchy-sounding credentials and connections; money and position are certainly no guarantee against being duped.

Not even the whodunit aspect of the murder, which is pretty clear, even if you do not know the real story, or the precipitating event, revealed at the film’s non-climactic climax. The questions we need answered are about the main character himself: Who is he, really? What in his background got him as far as he did? When did it become impossible for him to be careful? He knew what lies were necessary to get him what he wanted; why, even before the murder, did he lose control?

“Georgetown” is better at capturing the details of Washington culture than it is in creating equally authentic characters. As a longtime Washington resident, I can verify that the movie astutely captures the Bermuda Triangle of Washington life, as people move between the three core sectors: the powerful, those who try to influence the powerful, and those who write about them both. We see the humblebrags, the dinner parties, the judicious deployment of Washington-famous names as though playing a game of Battleship. People in Washington speak in acronyms and refer to obscure events, legislative and regulatory proposals, government programs, and individuals. DC is characterized by transient and exceptionally fluid power shifts as luminaries move in and out of government. That can make even its savviest denizens susceptible to newcomers who claim to have flashy resumes. Remember the emperor’s new clothes?  No one wants to appear to be out of the loop, so sometimes Washington luminaries and would-be luminaries forget to ask basic questions like, “Who are you again?”

“This story does not in any way claim to be the truth,” we are told as it begins. “Nonetheless, it is inspired by actual events.” Those events concerned Viola Herms Drath, a German-born Washington DC journalist, author, and advisor to public figures including George H.W. Bush. She married a German man named Albrecht Gero Muth who was 44 years younger than his wife and who claimed to have credentials including military rank in the Iraqi army. He was convicted of murdering her in 2014.

In the film, Vanessa Redgrave plays Elsa Brecht, a Georgetown journalist and author, and Christoph Waltz, who also directed, plays Ulrich Mott, who meets her around the time he gets fired from an unpaid internship on Capitol Hill. After the death of Elsa’s husband, she is inconsolable until Mott (as she calls him) insinuates himself into her life. She is at first amused by his efforts at social climbing and political maneuvering, urging him on and advising him about who to approach. But when she discovers he has been lying to her, too, it is a different story.

The film is divided into chapters with titles like bullet points on Mott’s resume. In a flashback, we see him as a 50-year-old intern on Capitol Hill, given the typical intern assignment of taking important constituents on a tour of the historic building. He tells them (wrongly) they are not allowed to take photos due to “national security,” already making himself look like an insider with access to non-public information. He’s quickly fired with the classic “not a good fit,” though at first he thinks it means he’s being promoted to a policy position, showing us his tendency toward grandiosity. On the way out, he steals his boss’ ID, which gets him into Washington’s biggest night, the White House Correspondents’ Dinner, unaffectionately known locally as the Nerd Prom. Other chapters are titled “The Butler,” “The Diplomat,” and “The Embed,” as Mott insinuates himself, “all about eve”-style, into Brecht’s life. Her concerned daughter (Annette Bening) urges her to find a more age- and status-appropriate escort. “They’re old and boring,” Brecht says. “Mott is young and interesting.”

Waltz is a good fit for the role, whether his character is ingratiating or finding it harder and harder to maintain the calm and capable persona he so desperately wants to be and be seen as. But the script by David Auburn is more interested in the culture of the title neighborhood than insight into the characters’ lives. Bening as Brecht’s daughter and Corey Hawkins as Mott’s frustrated defense attorney are barely permitted to make an impression. Ultimately that is the fate of the film as well.