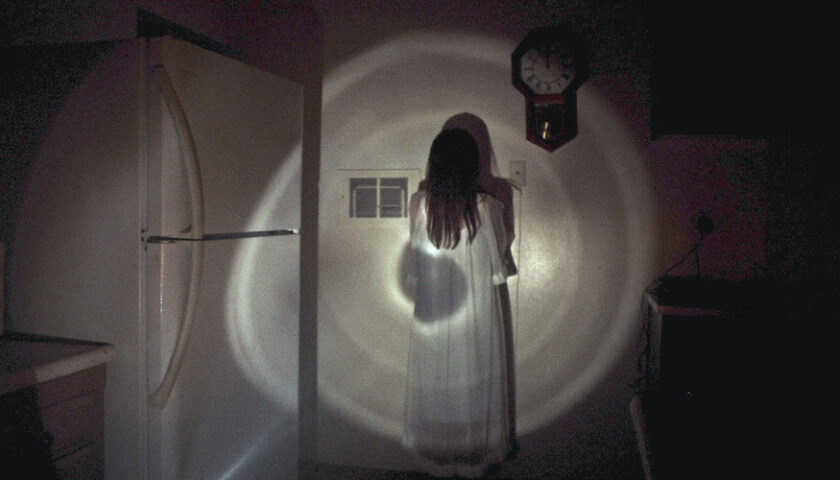 A new home can be scary, if only because it’s still unfamiliar. That’s the scariest thing about “The Djinn,” a new horror movie about an evil genie who stalks a mute pre-teen boy. That sentence might seem convoluted, but there’s really not much plot in “The Djinn,” a genre exercise set primarily in a suburban home on “a quiet summer night, 1989” (according to an opening title). That house becomes a battleground for Dylan (Ezra Dewey), a mute 12-year-old who, when left alone by his single father Michael (Rob Brownstein), decides to conjure a combative spirit from a conveniently unearthed tome called “The Book of Shadows.”

Dylan’s genie apparently stands in for a number of childhood traumas, chief among them the absence of Dylan’s mother (“Do you think mom would have stayed if I wasn’t … different?”). But the title monster doesn’t evoke much, because the generic rituals used to summon him aren’t as well-observed as they should be. So while there’s nothing essentially wrong with the monster in “The Djinn,” it also often seems unrelated to the house it haunts.

We don’t really know much about Dylan, or how he relates to the outside world, and not just because he doesn’t leave his new home. He does, however, enjoy listening to synth pop on the radio (because it’s the ‘80s ‘n stuff) and seems to have a picture-book nice relationship with his father, as we see when Michael reads aloud a portentous passage form Pinocchio, the ending of which is the only important part: “But what’s done—can’t be undone.”

Dylan also seems to be at least somewhat aware of his new home’s dark past since, in a brief early scene, he asks Michael: “Did the guy that used to live here really die here?” Michael also abandons a newspaper with a suggestive headline: “Night of Terror.” Oh, and: the central air unit rumbles like the basement furnace in “Home Alone.” Some of these plot points matter more than others.

Unfortunately, these establishing scenes promise a lot more than the rest of the movie delivers. Because once Dylan heedlessly summons the genie—to restore his voice, his home life, his peace of mind, etc.—“The Djinn” becomes more about avoiding a child’s fears than contending with them. Co-writer/director/producer duo David Charbonier and Justin Powell don’t seem to know or care much about what’s going on with Dylan; they often present him as an innocent babe in the woods who, against all good judgment, makes a very bad decision that can’t be undone. Which wouldn’t be such a bad thing if “The Djinn” flew from one canned confrontation to the next, a fleet chase film set entirely in a new dark house. Too bad “The Djinn” is often as plodding as it is impersonal. This movie crawls whenever it needs to sprint. (Powell is credited as the movie’s editor in the movie’s press notes.)

More importantly: nothing seems to stick to Dylan. Dewey’s just not a strong enough performer to carry an entire movie with just his body language and facial expressions. Not yet anyway. As Dylan, he spends much of the movie catching his breath, and trying to figure out where and how the genie will appear next. And while problem-solving often seems to be Charbonier and Powell’s priority, Dylan’s problems are only so complicated. He has a couple of gonzo heroic moments, like when he tries to improvise a weapon using whatever’s handy in his bathroom. But this particular scene is way too pokey and poorly covered, leaving poor Dewey stuck with only one memorable thing to do.

“The Djinn” often lurches from one moment to the next, and rarely settles on noteworthy character details or special effects. I mean, why does the font on the Book of Shadows look it was slapped together by a Hot Topic intern on a harsh deadline? And how come the rules and sections of that book are more uninvolving than even the blandest tile game, full of descriptive text like “But beware the Djinn’s toll, for the gift that you seek may cost your soul” and “Artifacts required—clock, candle, mirror”? Too much time is wasted in setting up a monster whose character is summed up in interminable boilerplate passages like “Although immortal, the Djinn is susceptible to the laws of men while in the mortal realm, able to regenerate only upon return to its world. It may only be banished if the flame is extinguished after the stroke of midnight.” That’s a fine enough setup for an indie horror movie, but personality-wise, that’s about as forceful as this stylistic doodle gets. I wanted to root for “The Djinn,” but its creators never really found the devil in their movie’s details.