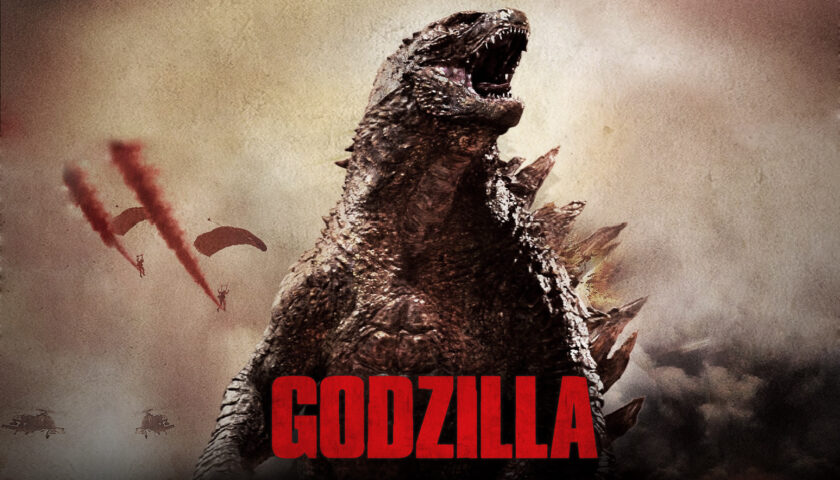 I saw the trailers for this a year ago while I attended a screening for Aronofsky’s NOAH . I didn’t fancy it much . GODZILLA conjures up memories of the big budget blandfest from a decade and a half ago . Just put some CGI on screen and voilà you’ve a Summer blockbuster . This version did get a very good average rating when it opened , something in the region 8.1 but progressively got lower and it now has a rating of 6.6 indicating something average . To be fair I went in with an open mind and did find myself enjoying things more than I probably expected

The original GODZILLA from 1954 was of a course a Japanese film that used the monster as a metaphor for the bomb . It did quickly abandon this subtext and just became a long running franchise where the titular monster got involved in all sorts of battles with other giant monsters . In its favour Gareth Edwards version of GODZILLA does keep the ethos of this . Radiation is very much to the fore of the story and while Godzilla might not be the hero he’s certainly not the villain and this is reserved for “Massive Unidentified Terreistial Organism” a sort of hybrid between a giant praying mantis and a dragon . You know at one point they’re going to be meeting in a climatic battle

Of course two hours of giant CGI creatures getting in to a punch up isn’t going to resonate with an audience so Edwards includes a very human backdrop as the story takes place through the eyes of serviceman Ford Brody . You got to love that name , it’s sounds like a character John Wayne was born to play , a man’s gotta do what a man’s gotta do , get off your horse and drink your milk etc . It wasn’t until I found out after seeing the film that I found out Brody is played by English actor Aaron Taylor-Johnson who I was totally convinced was one hundred per cent Uncle Sam . That said this isn’t an actors type of film and I’m speculating that the casting of Cranston and Binoche might have led to the backlash by many people . If you want to see Binoche try not to be blink because you will literally miss her . It’s also difficult not to notice that there’s a strong streak of manipulation as to how the characters play out . It’s also yet another film where a little kid is used in a scene to keep the audiences emotions on tenterhooks

Regardless of this people watch a film like GODZILLA for action set pieces and you can’t really fault Edwards for what he’s done here . He doesn’t have a idiosyncratic quirk to his directorial style and the film does have that kind of Summer blockbuster look but he also previously directed MONSTERS and that movie featured a couple of aliens mating and here the MUTOs have a similar though much more shorter sequence . If you need a film calling for alien reproduction I can see Gareth Edwards being a natural auteur.