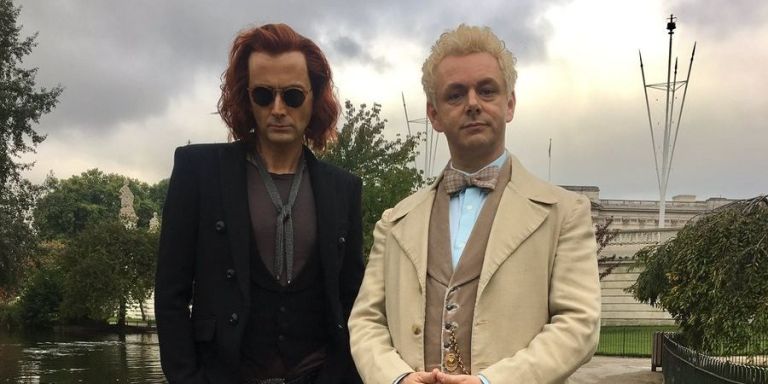 Review: Michael Sheen and David Tennant have been spotted on the set of their new Amazon series Good Omens, a long-anticipated adaptation of the cult comedy novel by Neil Gaiman and Terry Pratchett.

The series finds them playing an angel and a demon who team up to prevent the impending birth of Satan, as they’ve grown unusually accustomed to all the everyday delights the UK has given them.Both sporting uniquely shocking haircuts, Sheen and Tennant were photographed this morning shooting in London’s St. James’s Park. Neil Gaiman has also been tweeting from the set, posting behind-the-scenes photographs.

“People have fallen in love with an angel and a demon in a book by Terry Pratchett and me, and they have been excited and nervous to see how they would appear on screen — and I was probably the most nervous and excited of all,” Gaiman wrote. “Michael Sheen is the best and finest of bookseller angels, David Tennant the coolest and most delightful of demons. Together they are one hell of a double act (or do I mean one made in Heaven?)”

This is the first time Good Omens has made it before cameras, but it hasn’t been for want of trying. Terry Gilliam attempted to mount a film adaptation of the book back in 2000, with Johnny Depp and Robin Williams eyed to star. Terry Jones was also reported to be in talks to write a proposed TV series adaptation back in 2011. A radio adaptation starring Mark Heap and Peter Serafinowicz debuted on BBC Radio 4 in 2014.

Don’t get too excited about this new series, though. Good Omens, which costars Jack Whitehall, Miranda Richardson and Michael McKean, isn’t scheduled to debut on Amazon until 2019.