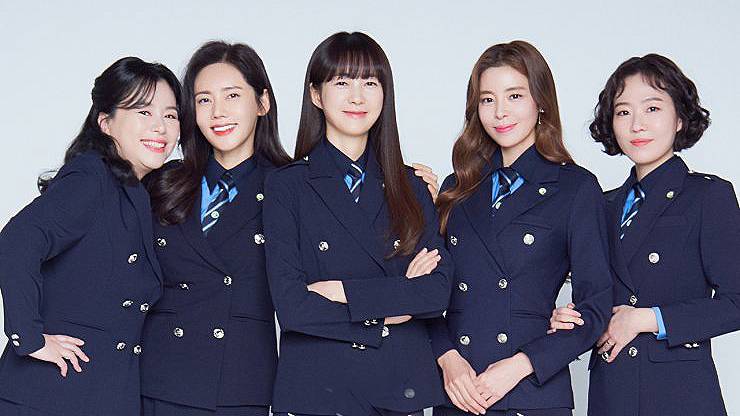 During the class, she sees a woman from her past, which sends her into a panic. When the woman says, “Why did you do it? You never stood a chance against me,” she imagines bludgeoning the woman with a coffee mug. Then she wakes up, lying next to her son.

The next time we see the woman, Lee Eun-pyo (Lee Yo-won), she’s in a moving van. We then cut to four moms getting their young kids ready for school. They’re all doing “green” duty that day, which is traffic safety duty. They’re basically volunteer crossing guards, who wear green vests and hold flags that tell traffic to stop to let kids cross. As Eun-pyo’s moving van goes down the street, a kid runs into a crosswalk, and is saved from the van by Byun Chun-hee (Choo Ja-Hyun).

At a parents’ organization meeting, a lecturer tells the gathered moms that they should start intense studies with their kids as early as 5, leading to another of the moms, Kim Young-mi (Jang Hye-Jin), to text the other moms’ chat that the philosophy is too harsh. Another mom, Park Yun-joo (Joo Min-kyung), mistakenly texts that chat a derisive message about the lecturer’s hair.

Eun-pyo is moving into the neighborhood, with help from her mother; Yun-joo is her cousin and good friend. After finishing her doctoral dissertation in aesthetics, she was up for a teaching position, but a major mistake cost her the job, and she’s trying to start over. Eun-pyo is barely hanging on; she runs afoul of Chun-hee at a bake shop, only to find out that their neighbors.

At a birthday party, she makes sure to tell Yun-joo not to mention her husband’s police work, as it’s caused them problems in the past. Talking to the other moms, she gets on Chun-hee’s bad side again, saying she’s “not that kind of mom” when talking about monitoring her kids’ studies. Then Eun-pyo bounces on the expensive violin of Chun-hee’s daughter.

Eun-pyo goes to buy an antique bookshelf from the woman who lives in the building’s penthouse, and is surprised to see it’s her old friend Seo Jin-ha (Kim Gyu-Ri); they were best friends in France when Eun-pyo was in grad school. Something has gone on between them, because even though Jin-ha is overjoyed to see her friend again, Eun-pyo is cold as ice towards her. Jin-ha is also the woman in Eun-pyo’s bad dreams, so something else is afoot there.

In the first episode of Green Mothers’ Club, writer Shin Yi-won keeps the lives of the five central characters a bit close to the vest. We know the most about Eun-pyo and why she’s making a fresh start in this new neighborhood, though the actual circumstances of how she sank her teaching career are still a bit up in the air. She wrote something about one of her mentors that one of her sons posted on a public board by mistake. It was enough of a disaster that she actually grabbed and shook her younger son in distress. She begs the professor for forgiveness but he ignores her presence.

What also seems to be Eun-pyo’s role is the one who gets embroiled in the other four moms’ lives. By the end of the first episode, there are strong connections established between her and every mom except Young-mi. And we’re pretty sure that will change in the first few episodes.

Despite what we wrote above, we don’t really even know most of the moms’ names just yet; they’re identified as “so-and-so’s mom” through most of the episode. That’s obviously on purpose, because when you get to know other school parents, that’s how you know them, and you learn their actual names later. But that decision also puts at a bit of distance from the four other moms, and puts us on Eun-pyo’s side, especially when Chun-hee basically blows off Eun-pyo at the birthday party.

We hope that we get a little more of a picture of the other moms as the series goes along, so we can get a better feel of the rivalries and the relative roles they play in the elementary school parent hierarchy.