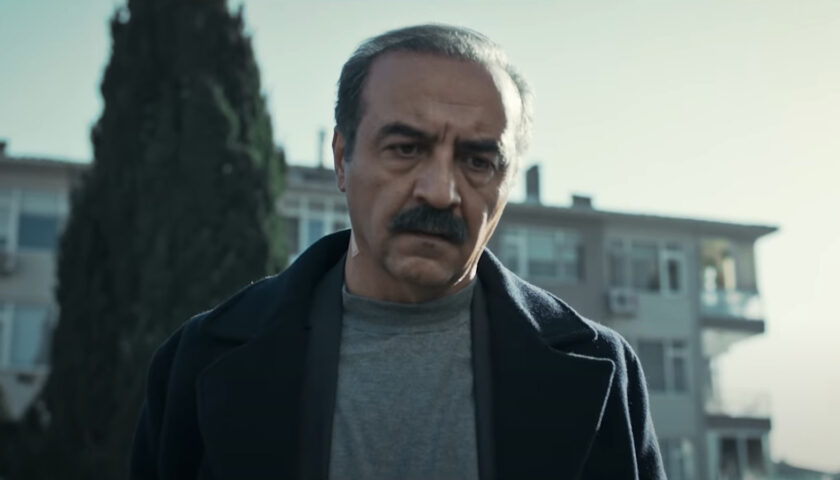 In Grudge – titled Kin in its original Turkish – an upstanding police officer sees his life begin to fall apart when he becomes the target of a vengeful conspiracy he never saw coming. Set in Istanbul, Turkey, the crime thriller makes you question the innocence and involvement of its characters, and leaves you wondering who in this dark, violent world – if anyone – is worth trusting.

Chief Inspector Harun Celiktan (Yilmaz Erdogan) has just been named police officer of the year, and another promotion seems nigh. High on this news, he heads out with his team to celebrate and gets into a cab to head home after a happy evening. After drifting off, he discovers that the cab driver has taken him to a remote area with plans of killing him. Harun fights for his life and winds up killing the cab driver, wiping the scene when he departs in the hopes of it disappearing. The next morning, the body is hung off a crane outside the police station, and the squad – and Harun – scramble to find the perpetrator of this gruesome murder.

As his team gets closer to the truth, Harun finds himself looking over his shoulder and soon realizes that he is the target of some kind of conspiracy. Both the fugitive and the investigator, Harun struggles to cope with his life falling apart around him – and discovers that his past in the force may have come back to haunt him in ways he never expected.

Grudge is everything you can ask of a mid-tier crime drama; a great ensemble of police officers, a haunted leading man, a delightfully ’90s thriller score. Is it brilliant or particularly memorable? Perhaps not. But it’s watchable and compelling as hell, with a juicy story at its center and a strong cast to help guide us with every twist and turn. In addition to the world of the film itself sucking you in immediately, Grudge also owes a lot to its excellent cast; the aforementioned Erdogan leads the troops valiantly, but Duygu Sarasin is also a standout, stealing each of her scenes with a delightful devilishness that adds a special extra layer to the film as a whole.

From the opening sequence – which is obviously in place to show us an event that is going to come back to haunt our protagonist – we know we’re in for a vengeance-driven journey, even if we aren’t quite sure who the players are just yet. It’s a strong script, even if it isn’t particularly original; things move quickly, dramatic confrontations pack a punch, and each big reveal plays out in a way that feels true to the script – not hokey or overdramatic. It’s a well-paced, well-performed flick steeped in darkness; what more can you possibly ask for?