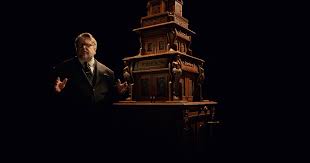 Guillermo del Toro does not direct any of the eight hour-long shorts in his new Netflix anthology “Guillermo del Toro’s Cabinet of Curiosities,” but it’s very much a continuation of the hard-worn values that have made him one of our greatest living horror filmmakers. Every story from its murderer’s row of notable horror directors—who cover a wide range of periods, unimaginable monsters rendered realistic, and existential crises—has the level of detail that goes into an immersive del Toro feature, with immense value placed here on production design. It’s not just the promise of a good scare that casts a spell, but it’s the exquisite corpses, furnished haunted houses, nightmarish paintings, and more. Every short here has a piece to recommend it, even if some burns can be too slow, or moral lessons a little too pat.

Emerging from the shadows at the beginning of each episode and co-starring with a towering wooden structure of endless secret compartments, “Cabinet of Curiosities” also has del Toro introducing each director as a figurine, naming them every time. Del Toro reportedly hand-picked everyone, and it is in turn a filmmaker-forward enterprise. The likes of Jennifer Kent (“The Babadook”), Panos Cosmatos (“Mandy”), David Prior (“The Empty Man”), and Ana Lily Amirpour (“A Girl Walks Home Alone at Night”) thrive with their respective grooves and fascinations, making “Cabinet of Curiosities” a treat for fans of standout horror filmmaking.

The series premieres with two shorts each day beginning on October 25, starting with Guillermo Navarro’s “Lot 36.” Focused on an angry man dealing with a storage locker he purchased, the plot (based on an idea by del Toro) can take a while to get going. At first, it’s the tough interactions he has with the world—and people of color, as a bitter white American man—and then it’s the pursuit for a very rare book of demonic spells that will help him get money he owes to some worse people. Tim Blake Nelson gives a ragged performance, capturing the rich disgust of this man. And the cinematography is mighty illustrative, the way it creates patches of black, brown, yellow light with its old storage lockers.

One of the very best performances from the entire series comes from David Hewlett in “Graveyard Rats,” about a grave-robbing opportunist who enters into an underground hell full of vermin. Directed by Vincenzo Natali (able to have more fun here than with his recent series gig, Prime Video’s “The Peripheral”), the short mostly has Hewlett scrounging through dirty and claustrophobic spaces, chasing a greedy dream that puts him face to face with one of the series’ best monsters. Hewlett is alternately comical and tragic as his odyssey gets even more nightmarish. Every time Hewlett’s grave-robber feels he might be doomed, he tries to make some bargain out loud to God, as if he could even con a spiritual force to let him get what he wants.

The series’ most unforgettable short may just be David Prior’s delightfully unhinged “The Autopsy.” In it, F. Murray Abraham plays a medical examiner who pieces together a strange disaster at a nearby Pennsylvania mine, which involved a man with a wild look in his eye jumping on top of a lift before detonating an explosive orb, killing himself and nine others. The short is trippy and nasty, and it loves to put different incisions and removed organs in extreme close-up while making a two-hander with an otherworldly consciousness.

Having recently released “Mona Lisa and the Blood Moon,” director Ana Lily Amirpour looks at TV and the gaslighting beauty industry with “The Outside,” which has touches of Larry Cohen and centers a great performance from Kate Micucci. A taxidermist by hobby and a bank teller by day, Micucci’s Stacey becomes fixated on changing her outside, which she thinks is possible thanks to an Alo Glo cream peddled by a piercing figure on her TV screen played by Dan Stevens with cascading white hair (the wigs in this series are often incredible). The cream starts to do worse for Stacey’s body covering her with itchy red spots, but the TV has made her think she needs to suffer more in order to heal. The short becomes darkly funny and uneasy, effectively using disorienting camera lenses that convey Stacey’s warped point-of-view.

Directed by Keith Thomas (“The Vigil” and this year’s “Firestarter” remake), the ornate, somewhat routine “Pickman’s Model” looks at art as a disturbing expression of suffering. Ben Barnes plays an art student whose life is rocked by demonic visions created by a former classmate (Crispin Glover), who reappears many years later, threatening the man’s family. “Pickman’s Model” is one of the shorts here that might not be as gripping as one would want with its hour run, but the paintings themselves are indeed disturbing, especially how Thomas makes them slightly move as if they were breathing.

Rupert Grint stars in Catherine Hardwicke’s “Dreams in the Witch House,” as a 1930s man who seeks to connect with his twin sister Epperley years after she died. Despite the intrigue from its casting (including Nia Vardalos and DJ Qualls), this visually drab story of grief and haunted spaces only has its punchiness to keep it interesting—it constantly shifts and tries to raise the stakes. But this one is also guilty of being the most plain, its ideas about denying grief only more memorable because the rat ain’t no ordinary rat.

Making his long-anticipated next project after “Mandy,” Panos Cosmatos turns “Cabinet of Curiosities” into his own unmistakable toy box of fixations; his short “The Viewing” is full of the ingredients that have made him a fascinating sci-fi horror storyteller, even with “Mandy” and “Beyond the Black Rainbow” to his name. Starring Charlyne Yi, Eric Andre, and Peter Weller, the short dabbles in the same austere, atmospheric storytelling of Cosmatos’ previous work, focusing on strange exchanges accompanied by a rich synthesizer score (courtesy here of Daniel Lopatin). The short’s haziness can make it drag, but it’s long into its duration before one wonders just what the hell is actually going to happen. Plus, Cosmatos creates a hypnotic effect by shooting on film, garnering soft yellow light and heavy shadows on Weller’s face, while making for a respite from numbing digital crispness that other “Cabinet of Curiosities” installments can suffer from.

The last installment, at least for this “season” of “Cabinet of Curiosities,” depicts a married couple who share a love for studying dunlin birds, but have grown apart after a tragedy they can’t talk about. That emotional burden is a large part of the slow burn in “The Murmuring” which director Jennifer Kent actualizes as a gothic story with saturated costumes and peaceful wide shots of the two studying the mysterious group actions of birds. Based on a short story by Del Toro (with Kent adapting the teleplay), the short goes for the heart with its scenes of a tense marriage, which are more striking than the horror beats and bumps in the night that Kent eventually relies on.

At a time when streaming makes shorts even more appealing for viewers and distributors alike, “Guillermo del Toro’s Cabinet of Curiosities” doesn’t have the air of something that’s full of director’s simply trying to get a gig, working with a skimpy budget. The series has more in common with previously revered anthologies like “Eros” or “New York Stories,” for starters, in which “Cabinet of Curiosities” gives us many of these filmmakers’ personalities, allowing us to understand them further. It’s a special treat to see them again, all feeling so free, guided by a master’s standards.