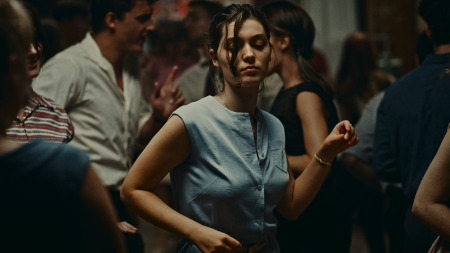 The recent roadblocks to legal abortion set up in Texas, the Supreme Court’s refusal to nix the restrictive new law, and the determination of American conservatives to keep chipping away at Roe v. Wade make Happening resonate all the more forcefully. Not that Audrey Diwan’s intensely intimate chronicle of a young woman’s fight for control of her body requires recent headlines to make it relevant or gripping. A blunt-force yet also measured drama propelled by a performance of astonishing emotional transparency from Anamaria Vartolomei, this is a slice of clear-eyed French social-realism that will be meaningful to anyone who cares about personal freedoms.

Diwan and co-writer Marcia Romano adapted the screenplay from the autobiographical 2000 novel by Annie Ernaux, diving directly into the central character’s world with a style that mirrors the author’s voice. The sensitive subject matter is illuminated by treatment that’s pithy and direct, often quite graphic and laced with precise details that put you very much in the environment of the time — regional France in 1963.

Annie (Vartolomei), Hélène (Luàna Bajrami) and Brigitte (Louise Orry-Diquéro), college dorm-mates studying literature in Angoulême in the country’s southwest, buzz about their room getting ready for a local dance. But from the minute they arrive, it’s clear that desire, even for these women in their early 20s, is strictly the province of men, and a chorus of judgy mean girls stands ever-ready to slut-shame transgressors. Annie is virtually alone in seeming comfortable enough in her own skin to even talk to guys.

With subtlety and economy, Diwan and Romano’s script, along with the work of their unerringly naturalistic actors, conveys just how taboo sex is for young single women in this puritanical climate. Though when Annie discovers — three weeks after a clandestine hookup with a visiting student from Bordeaux — that she’s pregnant, it’s less the certainty of humiliation and disgrace than the instant narrowing of her future path that terrifies her. Continuing her studies in order to become a teacher, which is her goal at that point, would be impossible as an unwed mother.

The doctor who confirms her pregnancy (Fabrizio Rongione) is not unsympathetic to her dilemma. But he urges her not to even to speak about an abortion — the word itself is never uttered in the film — given the rigid laws against it, the threat of imprisonment and the extreme health risks of doing it illegally. In the fourth week of her pregnancy, Annie sees another doctor (François Loriquet), who tricks her by prescribing a drug he says will induce her period but instead strengthens the embryo.

When Annie travels to visit the baby’s father (Julien Frison) and inform him of her wish to terminate the pregnancy, he’s embarrassed by her abrasive behavior in front of his bougie friends and, after an argument, basically abdicates all responsibility. As the weeks tick on and the window to take decisive action begins closing, Annie is increasingly isolated. She’s unable to confide in her stoical but concerned mother (Sandrine Bonnaire) — a hard worker who runs a humble bar, she represents a life from which Annie wants to escape — or the professor (Pio Marmaï) whose high hopes for her dissolve as her grades start slipping.

Shooting in the boxy Academy ratio, cinematographer Laurent Tangy sticks close to the protagonist throughout, searching for signs of surrender in her face even as her resolve never falters. “I’d like a child one day, but not instead of a life,” she tells Rongione’s doctor during a second visit in which he’s visibly nervous over the legal and professional repercussions he could face.

Vartolomei’s performance is as much defined by the panic in Annie’s eyes and her movements as the anger simmering just under her skin at her lack of choices, a state echoed in the increasingly agitated sounds of Evgueni and Sacha Galperine’s score. The strain of having to keep her problem secret and suppress her fears is indicated in her every reaction.

Keeping the focus as much on Annie’s turbulent emotional state as on the drastic steps she’s forced to take, Diwan shapes the film into a psychological thriller in which the protagonist is engaged in a fight even with her own body, which proves a resilient opponent. A number of unblinking scenes — physically explicit though shot with sensitivity and restraint — are quite distressing. But the film never sensationalizes Annie’s odyssey for dramatic effect.

When she’s finally directed, in guarded whispers, to an illegal abortionist who can perform the procedure, the inspired casting in that role of an almost unrecognizable Anna Mouglalis renders those tense scenes quite distinctive. Even as the excruciating pain plays out across Annie’s face and in her agonized cries, the ordeal becomes almost an out-of-body experience. The statuesque Mouglalis is given an androgynous look to match her deep, throaty voice, and Diwan deftly uses those qualities to suggest an otherworldly space inside the abortionist’s apartment, where silence is imperative behind the paper-thin walls. But the developments that follow bring reality crashing back with alarming force, even if the film is notable for its predominant solemnity.

Happening is often a tough watch, compassionate but brutally honest, and almost breathless in its chronicle of a struggle that has obviously stayed with the author for decades. Diwan’s choice to de-emphasize the conventional period trappings quietly underlines the seriousness with which she links the past to the precarious present — with abortion still illegal in many countries and under persistent threat in others. The film serves as both a transfixing drama and an urgent reminder of the need to protect women’s reproductive rights.