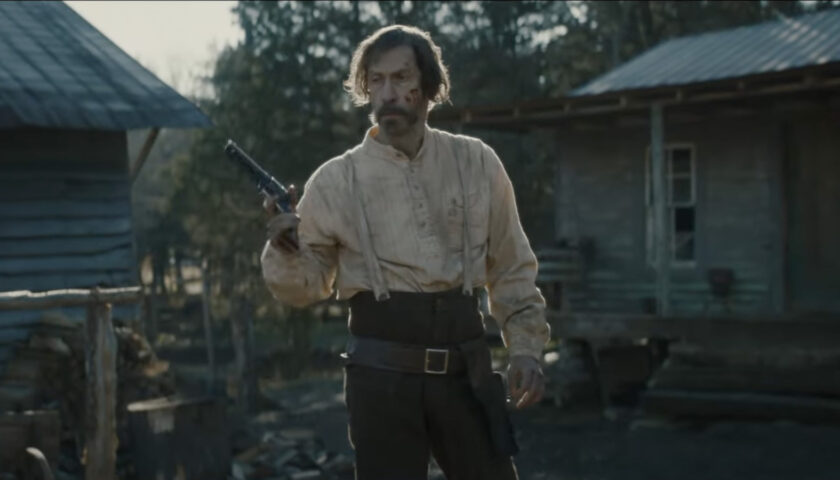 An atmospheric slice of vintage Americana that shows there’s plenty of life left in seasoned Western archetypes, Old Henry gets much of its mileage from the somewhat unexpected lead casting of Tim Blake Nelson. Playing the eponymous widowed, Scripture-quoting farmer, carving out a hardscrabble existence in the Oklahoma Territory of 1906, Nelson does a complete 180 from the jolly singing, sharpshooting cowboy of the Coen brothers’ The Ballad of Buster Scruggs. Or is it? When Henry is put in a tight spot by ruthless men chasing a bag of stolen cash, his unruffled resourcefulness forces even his own petulant son to consider his identity in a new light.

This lean and tightly controlled production from writer-director Potsy Ponciroli (best known for the Billy Ray Cyrus sitcom Still the King) plays out for much of its taut buildup and violent climax as a well-crafted exercise in old-fashioned but durable genre tropes. But it evolves into a satisfying reflection on the more complicated, somber realities behind the icons of the Wild West, separated from the embroidery of legend. The film is slated for an Oct. 1 release from Shout! Studios after its out-of-competition premiere in Venice.

Evocatively shot in the grasslands of Waterford, Tennessee, Old Henry opens with violence. A posse of three led by Ketchum (Stephen Dorff), who wears a sheriff’s badge but whose sadistic streak suggests he’s no upright man of the law, is in pursuit of two men. One of the fugitives (Brad Carter) is captured and brutally dispatched after being tortured for information. The other — later revealed to go by the name Curry (Scott Haze) — gets away, wounded by a rifle shot.

Accompanied by his “deputy” (Richard Speight Jr.) and a Mexican tracker (Max Arcienega), Ketchum continues the manhunt, but Henry beats them to it. When a horse wanders onto his land with a bloodied saddle, he sets off to investigate, finding Curry close to death by a creek bed, a satchel stuffed with cash lying nearby. Henry’s first instinct is to leave it there and walk away from trouble. But he slings Curry over his horse and takes him back to his lonely homestead, hiding the loot and the wounded man’s pistol in a secret compartment in his closet.

All this has been closely observed by Henry’s teenage son, Wyatt (Gavin Lewis), who chafes at his father’s refusal to let him near a gun. Henry talks up the advantages of unsettled Oklahoma, where if a man can hang on to a piece of land for a year or two, it’s his. But Wyatt is impatient to go hunting and traveling, not be stuck doing farm chores with only his Uncle Al (Trace Adkins) for occasional company. As the story’s father-son friction intensifies, Wyatt displays contempt for his crusty, taciturn dad, whom he views as a worthless old man despite all his pithy talk of honesty and truth. But Henry is only trying to shelter his son from the increasingly apparent legacy of his own shadowy past.

Once Curry begins showing signs of recovery, Henry is forced to gauge his trust in the stranger’s version of the events that led him there, which becomes tricky when both the wounded man and Ketchum claim to represent the law. However, Henry’s confidence handling a weapon and his refusal to back down even in the face of a siege in which he’s heavily outnumbered make it clear this diminutive man wasn’t always a humble farmer.

Directing with a sure hand and an obvious love for the classics of the genre, Ponciroli plants clues throughout as to the plot’s major disclosure, all of which acquire clarity in retrospect. Making skillful use of a pensive score by Nashville-based multi-instrumentalist Jordan Lehning, full of mournful strings and notes of quiet foreboding, the director keeps the pace humming while allowing each scene room to breathe. His choreography of both the preliminary violence and the explosive final showdown is detailed and dynamic.

Cinematographer John Matysiak’s widescreen frames capture the extreme isolation of the setting and its vulnerability to intruders, while Max Biscoe’s rustic production design feels fully inhabited and true to the period.

Among the supporting cast, Dorff ably embodies a villainous man with a black heart; Haze keeps his character’s trustworthiness suitably ambiguous; country singer Adkins blends seamlessly into the compact ensemble; and although Lewis reads perhaps a touch too contemporary at times, he conveys the gradual eye-opening discovery of a son quick to judge his father without fully knowing him. But as its title implies, this is Nelson’s film, providing a juicy role for the veteran character actor, who communicates with pathos both the regret and the steely resolve behind every beady-eyed squint.