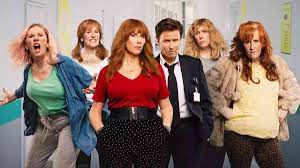 Earlier this year, Channel 4’s excellent, underrated prison drama Screw successfully walked the tightrope between the melancholy comedy of Porridge and the bald tragedy of Time. Hard Cell from Netflix – the content provider Channel 4 should apparently be aspiring to emulate – introduced Catherine Tate’s first full set of new characters since the end of her BBC sketch show almost 10 years ago, and only acknowledged the tightrope when it could be straddled for cheap laughs.

Tate, also creating and co-directing (with Married at First Sight UK director James Kayler), plays a series of broadly familiar caricatures which are then unpicked over six episodes, with mixed success. Front and centre is Laura Willis, the well-meaning but self-regarding prison governor of HMP Woldsley who is neglecting the more prosaic aspects of the job in favour of her own pet project of rehabilitation: staging West Side Story for the visiting television cameras.

Among the proposed cast of inmates, played by Tate: deluded Ros, convinced her abusive mammy Anne-Marie (also Tate) will be visiting any day, violent lifer Big Viv and timid punchbag Ange, with prison officer Marco (Tate again) spouting lazy prejudice from the sidelines. It is never clear whether we are laughing at or with the characters, with the attitude towards “late-onset lesbians” Cal and Sal feeling especially wobbly. If, indeed, we are laughing at all, although Big Viv’s appalling impressions of the Kardashians and a cameo from a Tom Jones impersonator suggest a surreal vein that should be tapped more liberally.

Where it departs from the Gervais template is in its final minutes. Having set its audience up for the sentimental conclusion of a cosily redemptive arc of sisterhood, forgiveness and rebirth, it shatters a hitherto benign portrait of life inside with a hot mess of a left turn which at best is brave, at worst utterly nonsensical and out of step with the previous 145 minutes of broad comedy. Perhaps it’s critique of prison reformers, or a treatise on the essential darkness of human nature. Who knows, but it is, at least, better than The Nan Movie.