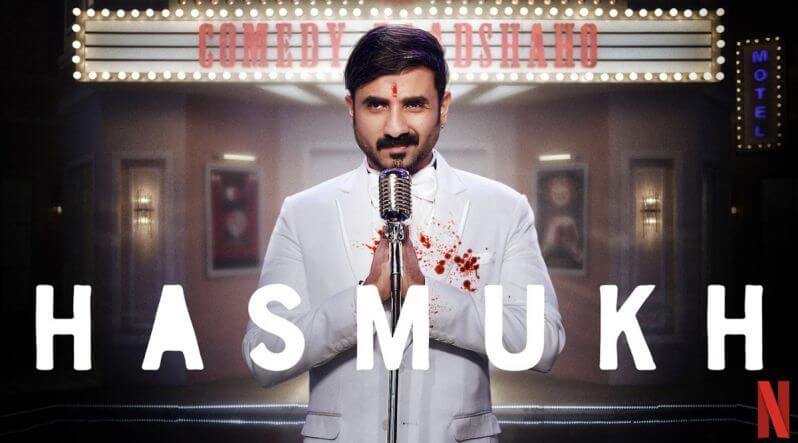 After releasing his Netflix stand-up special Vir Das: For India, he is back once again with a dark comedy web-series Hasmukh. This time, from chyawanprash and dunking Parle-G’s in his chai, Das is taking his audience into the back alleys of Saharanpur, a small town in Uttar Pradesh. The series marks Das’s debut on the OTT platform as an actor.

Directed by Nikhil Gonsalves and co-created by Vir Das and Nikhil Advani, Hasmukh is a weird, dark-comedy series. It does come with an amazing premise. Hasmukh is the story of a small-town Hindi comedian whose gets his mojo from killing people off stage so that he can kill it on stage with his performance. He does so to get his ‘feel’ and to get rid of his on-stage anxiety. Das’s character is a young, awkward and shy man, who has a lot of anger issues and an abusive past. This leads to him having low self-esteem, however, when he kills, he regains his confidence and his inner-star shines through.

The series features Das in the titular role of Hasmukh Sudiya. Orphaned at a young age, Hasmukh grew up in Saharanpur getting abused, neglected and bullied by his family and the people around him. Even his mentor, Gulati, played by Manoj Pahwa, doesn’t appreciate his talent. So one night when Gulati does not deliver on his promise of giving Hasmukh his big break, he loses it and kills Gulati. After killing him, Hasmukh dons his guru’s glittery jacket – which he was ironing a few minutes ago – and begins his journey as a stand-up comedian. However, things go south when he and Jimmy Bhaiya (Ranvir Shorey) discover that the key to his success and brilliant performance is, in fact, killing people.

With Hasmukh, Vir Das does enter uncharted territory. However, the show falls flat as a dark-comedy series. It is slow-paced, haphazard, and does not have any emotional depth. The reason Hasmukh does not click with the audience is the fact that it tries to be many things. The entire 10-episode series will leave you confused as to what the show wants to be – a dark-comedy series, a crime drama, rags-to-riches story or a satire on the film industry. With a confusing screenplay and in a bid to do it all, it fails.

Having said that, the things that click in Hasmukh are Vir Das’s brilliant depiction of a small town, its people and the dark side of the film and reality TV show industry, where dreams are easily built and broken. Dressed in gaudy outfits and depicting a gripping intensity, Vir Das’s character and its arc also make the series worthwhile. Ranvir Shorey as the gold-toothed Jimmy Bhaiya and his chemistry with Das, Amrita Bagchi as the strong showrunner and Ravi Kishan as the creepy TV boss are still believable and entertaining.

Das’s fascination with political satires is also not amiss in the series where he smartly introduces many jibes in his stage performances. From Narendra Modi to Mamta Banerjee to UP Police, Das doesn’t hold back and this is where he seems most in his element. The fact that the show is meta, what with the stand-up comedian playing a comedian, is not lost on us and its audience, but Hasmukh fails to explore it properly.

With flat performances and poor, haphazard screenplay, the series fails to make you feel anything emotionally or physically. At several points, the characters are not convincing enough. There are too many sub-plotlines running through the 10-episode show. Though the premise of the show is promising, Hasmukh becomes a drag halfway through the show. It remains an ill-conceived dark comedy that killed the fun – and neither for kicks nor claps.