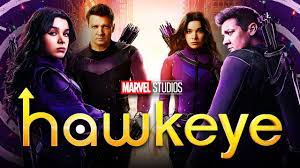 While WandaVision was essentially about television and its value as a comforting balm as well as a nostalgic distraction, while The Falcon and the Winter Soldier and Loki tried to be, Covid restrictions notwithstanding, “cinema in six 45-minute episodes,” this latest MCU miniseries is structured and paced like an old-school television show. Hawkeye is, thus far, an MCU equivalent of 1980’s adventure shows, most specifically MacGyver. No, neither Jeremy Renner nor Hailee Steinfeld defuse a bomb with chewing gum or escape from a prison with duct tape and a paperclip, but the small-scale, gee-whiz sensibilities, as well as the core plot (Barton reluctantly helps a young woman in over her head and targeted by bad guys), but Hawkeye is the MCU show which feels the most like, well, TV.

After a striking prologue showing the “battle of New York” from the point-of-view of a family unit moments before the patriarch becomes a casualty of war, we shift to the post-Endgame present day, with Clint Barton suffering with his kids through a god-awful stage musical based on the life of Steve Rogers. I do worry about legions of fans proclaiming the intentionally terribly Broadway show to be objectively good to the point where Disney actually tries to make the thing for real. Barton has lost some of his hearing due to the various action-packed events of his Avengers team-ups, so he can blissfully take out his hearing aids, a coping tool which I am familiar with when my kids get too loud.

Despite Barton’s attempts to spend his first Christmas in five years with his now-alive kids, circumstances involving a mysterious figure dressed in Clint’s old “Ronin” costume spurs him out of retirement. By the end of the first episode, he has discovered that this new not-Ronin is 22-year-old Kate Bishop (Steinfeld) who donned the costume on a whim and now sees herself targeted by those victimized by Barton’s post-Infinity War underworld murder spree. Long-story short, her dad died in the whole Avengers thing, while Hawkeye prevented her and her mother from being blown up too, so Kate has a non-romantic hero worship of Earth’s least mighty hero. Hawkeye has to don the bow-and-arrow and play reluctant surrogate dad even while his own kids hope he’ll be back in time for Christmas.

Renner is clearly enjoying himself. I’ll note that despite initial efforts to make him the next Tom Cruise (quite literally, before wiser heads prevailed and Ghost Protocol became an Ethan Hunt-centric movie again), Renner has always been at his best as a reluctant audience-surrogate accidental hero, a guy who would rather be watching a game rather than saving a world he barely understands. That the core mystery, involving the murdered uncle of Kate’s mom’s fiancée, barely raises the pulse is of little consequence since Clint shares our disinterest. He just wants to get his suit back, which climaxes in episode two in a wonderful adventure in a LARP event. Although, the LARP action can’t compare with the all-time classic finale of Paul Rudd and Sean William Scott’s Role Models.

Steinfeld is cast to type. Those who just want to see the True Grit/Edge of Seventeen/Bumblebee star being a quirky/cute bad-ass will get their money’s worth, and I am reminded that I need to get back into Apple TV’s Dickinson at some point. So much television, so little time, and I’m not even a TV critic. Which, yes, means that for those not explicitly invested in every MCU item or these specific characters, Hawkeye isn’t exactly essential viewing. Of course, with the sheer amount of Disney+ MCU shows released this year and next, not every one will qualify as Must-See TV, and nor should they have to. Not everyone who watched Ally McBeal also watched Profit, nor should we expect everyone who watches She-Hulk to also watch Moon Knight.

All of this is detailed in the kind of low-stakes, comedy-over-drama, small-scale adventure sensibilities indeed more fitting for the smaller screen. The action isn’t much, at least not in the first two episodes, but it’s also scaled-to-TV even while at least being “bigger” than Netflix’s infamous “hallway punch-fest” showdowns. I’m sure there will be initial complaints that the whole “Clint ran around the world murdering criminals” thing isn’t exactly harped upon, and we’ll see if that becomes more than a glancing subtext, and I’m assuming the events of Black Widow’s post-credit cookie will eventually come into play, but for now Hawkeye is closer in spirit to a Danny Bilson/Paul De Meo 90’s-era network TV superhero show than an MCU epic on the small screen. And for now, that’s fine.