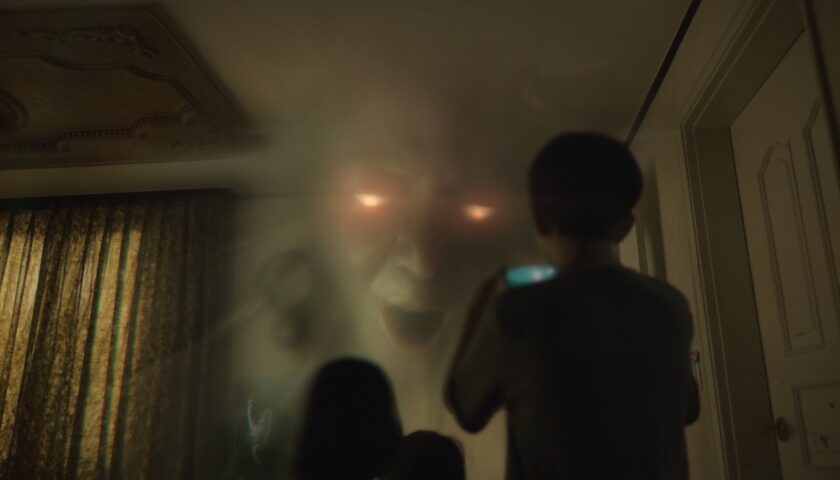 Watching people grapple with the inexplicable will always be a solid building block for a TV show. Whether it’s people disappearing, people fighting a mysterious outbreak, or people trying to make sense of things they find on their journey toward the Arctic, these kinds of stories get at something fundamental in a way that few other shows can.

So it makes it all the more potent when that search for answers gets fully cosmic. Such is the case with “Hellbound,” the latest international Netflix series to leap into the ranks of the platform’s most-watched.

In it, a strange fate is befalling random people in the Seoul of the not-too-distant future. Visited by the same wispy, shadowy prophet of doom, they’re informed that they’re destined for Hell and that their day of judgment is imminent. Given the exact date and time of their demise, they’re left to wait for the inevitable.

When that timer goes off, the person in question is visited by a trio of lumbering gray demons — they look a little like super-ripped Stay-Puft men, ashy and smoldering after being left in the oven too long — who proceed to pummel them into the afterlife. Capped off with an orb of blistering white-hot pain that chars these people to a crisp, the three run off back to their shadow realm leaving nothing but half a roasted skeleton behind.

An auspicious premise for a show, to be sure, but “Hellbound” is primarily concerned with what this new horrific fact of life does to the society left in its wake. Presented with ostensible proof of a vindictive higher power, there are forces that go about using this info for their own ends. Law enforcement agencies powerless to stop these attacks find themselves vulnerable. Religious zealots use the public “demonstrations” as a recruiting tool. Entire niche industries build up, catering to (or preying upon) anyone looking to mitigate the damage of them being labeled a “sinner” in the most public fashion.

“Hellbound” is bleak in the way that it shows these violent deaths, rendered in brutal detail by “Train to Busan” director Yeon Sang-ho. It triples down on that sense of despair by painting a world where the moral implications of these random occurrences gain widespread acceptance and endorsement. Visitations announcing a person’s doomed date and time are considered “decrees.” Each new burnt torso prompts a series of public accusations and speculation about what this person might have done to deserve it.

Maybe the show’s most noteworthy accomplishment is capturing a very specific feeling of collective helplessness. (Point to any example from the last handful of years where most people have knowledge of something horrific happening, yet feel powerless to do anything about it.) Anxiety about these public “demonstrations” is pervasive, yet there are people in “Hellbound” just trying to get through the banal distractions of their daily lives, all while hoping against hope that no one they know is the next to get engulfed. Whatever metaphor you pick, there’s an obvious power in how these triple giants keep barreling along, regardless of their intended target’s status.

For a show with this title and this setup, it’s unsurprising that “Hellbound” zeroes in on the religious responses to the attacks. We see a wide swath of people reexamining how they see their faith in the wake of irrefutable evidence. There are grifters, there are vloggers, there are figures propped up with adulatory free airtime. And there are certainly acolytes, streaming this new subgenre of attack-related content at work, on the bus, or behind a laptop in their bedroom. These public stabbings/garrotings/incinerations happen in broad daylight — there’s something almost as sinister watching the toxic aftermath spread.

Eventually, the rush to rationalize such an unthinkable thing leads to public emotional self-flagellation and a wave of people delighting in the suffering of others, especially if it means it validates their worldview. At its loudest and most unhinged, the way “Hellbound” paints the strongest fanatics in this web rarely feel like an overexaggeration, particularly when compared with how modern doomsday cults are currently operating.

A few months ago, there was a rush to figure out how something like “Squid Game,” a show with the wanton viciousness of dozens getting killed by automatic weapons in its opening episode, could become “cottage Halloween costume industry” popular. It does have a streak of pitch-black humor, arriving at times like when it shows how some people try to fend off their “judgment.” The monsters arrive, mete out their pain, then leave. These attacks are presented in such a matter-of-fact way that it’s hard to chalk up the show’s appeal to any mystery-box antics.

In some ways, “Hellbound” isn’t so much a thrill ride as an extreme form of true crime reckoning. At almost no point in the series are the people who receive decrees regarded as victims by the people in their community. Detectives see them as part of a pattern to solve. Bureaucratic religious officials see them as bargaining chips. Media executives see them as a potential cash cow. The lawyers, trying to help offer these people a chance for their families to be secure after they’ve gone, have to deal with the idea of putting a price tag on someone’s soul. The children they leave behind can’t live in peace when they’re hounded by vigilante true believers intent on doling out more punishment.

In six episodes, it’s hard to capture the full scope of how these demonstrations alter the societal fabric. But “Hellbound” is savvy in the way it treats this season with a bit of an anthology touch, avoiding the trap of following just one person as an audience surrogate. Casting a wider net, the series is able to cater its moral dilemma to people with different priorities and concerns. In particular, the show can track how people react differently when this threat switches from theoretical to tangible.

Yeon — holding the reins of this live-action adaptation of his webtoon along with original illustrator Choi Kyu-Seok, who’s a co-writer here as well — doesn’t present these demonstrations as a one-up game. Each new venue for the monsters’ arrival is instead a chance to show someone else trying to make sense of their destruction in their own way. Some offer it as a public testament. Others just want to live their final moments in peace. Plenty have last-second doubts and get pulled into an in-between grey zone. In the process, Yeon never pulls his punches, whether it’s showing what these individuals endure or the onlookers questioning their own complicity.

The season ends with an added wrinkle, one that’s just as much up to interpretation as anything that comes before. It can easily be seen as a faint glimmer of hope that could cut through the cloak of darkness covering nearly everything else. It could be cause for even more nihilistic escalation as people start to disconnect from reality even further. The weight of “Hellbound” comes in the realization that it’s probably both.

“Hellbound” is available to stream on Netflix.