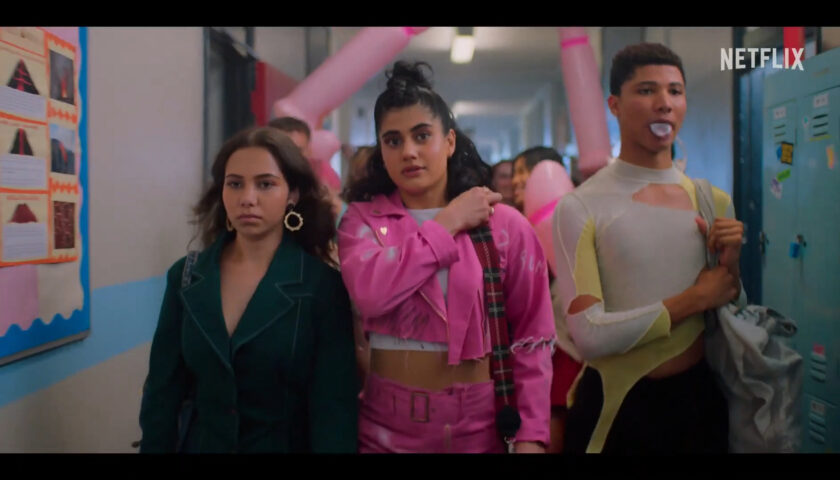 Rack off, Drazic! The streaming gods have spent some time rifling around in the nostalgia bin again, and this time they pulled out old Australian teen drama Heartbreak High (Netflix). The series, which defined post-teatime television for a generation of 90s kids, has been re-suited and rebooted for the digital age. We’re back at Hartley High, only this time the teenagers have active sex lives, smartphones and the freedom to swear with impunity.

Heartbreak High was always grittier than its soapy fellow countrymen, such as Neighbours and Home and Away, and while this update doesn’t shy away from the tougher issues, it has a much more ironic tone, and a generous sense of humour. Whether that humour will land with all viewers remains to be seen; I imagine some of it will succeed or fail along generational lines. But this Heartbreak High is big-hearted, and its teenagers are not entirely insufferable – an achievement in the difficult world of contemporary teen TV. Plus, someone reads out a fictional news story from the Guardian at least twice, which is a certain marker of good taste.

It centres on two best friends, Amerie and Harper, previously inseparable, who are torn apart by a mysterious grievance that turns them into enemies. I would tell you what the jumping-off point for all the drama is, but Netflix issued critics with a list of spoilers they would like us to avoid, which includes the main source of action for the whole thing, even though it happens in the first few minutes and almost everything that happens is about it. (It also means I couldn’t possibly say whether there is any connection between this lot and the original 90s series.)

Presumably, it is safe to explain that this ends up in Mean Girls territory, only with more of a focus on sex. The amiable Amerie, who is as charismatic as she is clumsy, briefly becomes persona non grata, though this sets her on the familiar teen drama trajectory of popular girl to misfit, where she befriends original misfits Darren and Quinni. Despite most of the school being pitted against her, she learns there’s more to life than being universally adored and having a crush on the hottest boy there, a model type called Dusty. (Dusty is so clearly played by a professional male model in his 20s that it is laughable to see him as a schoolboy, though this is TV self-aware enough to hint that it kind of knows it.)

More crucial is the breakdown of the relationship between Amerie and Harper after a terrible trip to a music festival, which leads to an undisclosed trauma that takes a long time to reveal itself. There is something sweet about Heartbreak High’s insistence on the central love story being a platonic one between teenage girls, and the message is very clearly that there are more important things to worry about than sex and romance and boys, even if they are nice diversions. The supporting cast is strong, particularly non-binary character Darren and their sidekick Quinni, two queer kids who have their own problems to overcome, though they do so with the grace and dignity television often grants to its favoured high-school outcasts.

While the kids are bickering among themselves, there are bigger problems at hand. Hartley High has a bad reputation and ranks lowest in the area, which is putting its funding at risk. You will just have to trust me when I say that there is a reason the students end up having to take sexual literacy tutorials, becoming self-anointed ‘sluts’, where they attempt to rise up against an “outdated and heteronormative” school sex education programme.

If this all sounds familiar, it is because it is so similar to Sex Education – from its tone, right down to the out-of-bounds area at school where some spoilery stuff happens – that if they weren’t both on Netflix, I’d wonder whether Netflix would have something to say about it. It basically removes the sex therapist element, moves it to the southern hemisphere and hopes for the best. This is not necessarily a bad thing. After all, Sex Education works primarily because of the way it pairs warmth and openness with gross-out humour and slapstick. But it did leave me with the sense that I had seen most of this before.

However, I started watching this wearily, ready to be underwhelmed by yet another reboot, and in that respect it exceeds expectations. It is well-trodden territory, sure, but it is funny and dry, and more gripping than it initially seems. Now rack off and finish your homework.