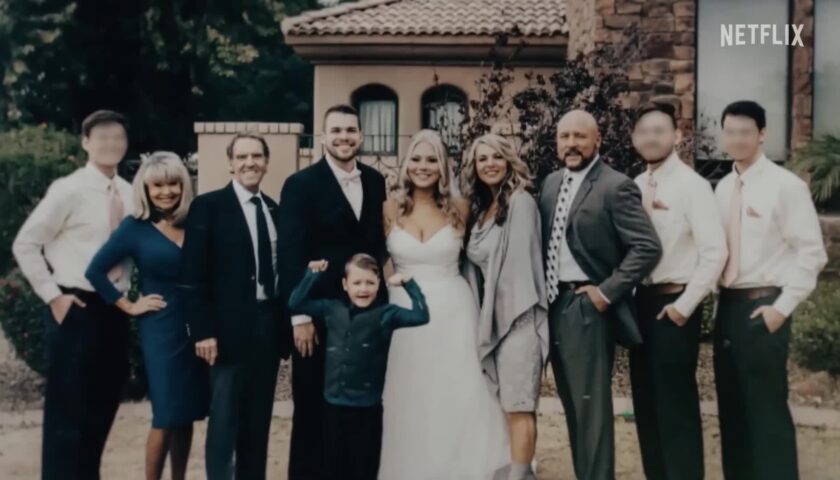 Sins of Our Mother is about as Netflix True Crime as it gets. It is bombastic, tells a grimly fascinating, awful story, is expertly structured and full of twists and turns, and leaves that slightly grubby feeling of getting sucked into other people’s suffering for the purposes of entertainment. Over three episodes, each more shocking than the last, it tells the story of Lori Vallow, who became known as the “Doomsday mom” in the US media, after an astonishing series of events involving numerous deaths, religious fanaticism, light and dark spirits and “zombies”.

Along with her fifth husband, Chad Daybell, Vallow is awaiting trial for first degree murder and conspiracy to commit murder, in connection with the deaths of her fourth husband, Daybell’s former wife and two of Vallow’s children, Tylee Ryan and JJ Vallow, aged 16 and seven when they died. Both Vallow and Daybell have pleaded not guilty. The length and complexity of even the explanation of what Vallow and Daybell stand accused of goes some way towards indicating how twisty and convoluted this documentary becomes.

The film-makers have been given interviews with family members, who tell their versions of the events leading up to Vallow and Daybell’s arrest and their role in the media storm that directly preceded it. Vallow’s mother, Janis Cox, talks of her shifting allegiances, of how she publicly defended her daughter, until she came to the conclusion that those accusing her of wrongdoing “were right”. Colby Ryan, Vallow’s eldest and only surviving child, is the most prominent voice, despite having been arrested last week on sexual assault charges (which were subsequently dropped). He gives a brief run-through of Vallow’s marital history and paints a grim picture of a tough upbringing marred by domestic violence and sexual abuse. Vallow becomes a devout member of the Church of Jesus Christ of Latter-day Saints, more commonly known as the Mormon church. There is much talk of the apocalypse and the end of days, of visions of angels, of days and nights without sleep.

By the time Vallow meets her fourth husband, Charles Vallow, she has two children, Colby and Tylee. The couple adopt a son, JJ, connected through the branches of a particularly complicated family tree. During that marriage, she becomes entangled with a novelist and fellow Mormon, Chad Daybell, who is married to a woman named Tammy; he eventually becomes her fifth husband. By the end of 2019, only Vallow, Daybell and Colby Ryan would still be alive.

There is a wealth of material to draw on here, from podcast interviews to emails, from phone calls to police interviews, to bodycam footage and, heartbreakingly, phone footage of the families in “happier” times. We see emails in which Daybell gives the people in Vallow’s life a “rating” of light or dark spirited, using a spiritual “points system” that he has come up with. We hear that living people are dead and that demons are using their bodies. Charles Vallow, panicked that he cannot locate his children, tells the police that his wife thinks she is “a resurrected god”; we see another officer telling her he doesn’t see that she is “a danger to yourself or anyone else”.

All of this barely scratches the surface. Justin Lum, an investigative reporter in Arizona, picks up the thread that the police initially did not, suspicious that the deaths and disappearances surrounding Vallow and Daybell may be connected. One of the many truly shocking claims, in a series full of them, is that Lori Vallow tells Charles Vallow’s other children of their father’s death by text message, then refuses to answer their understandably panicked questions.

It gets more complicated, more horrifying, pulling in more friends, more family members, more fanatical beliefs, until it reaches its awful end point. The problem with this documentary is that there isn’t really an end point. Vallow and Daybell were arrested in 2020 after the discovery of human remains on Daybell’s property, but the legal process has been long and drawn out; they are currently due to stand trial in January 2023. This imbues everything with a vague and jarring sense of coyness, a feeling that it is leaving hints, unable to tell the full story, despite the implication that it is all there to see if you look hard enough. There are moments where you wonder why it is leaving out crucial details, such as autopsy results, until you realise that those details have not yet been made public by the police.

There is no doubt that this macabre tale is fascinating. But often it addresses only the how of it, and not the why. I couldn’t help wondering if it should have waited until its two chief suspects had stood trial – and a verdict been reached – to tell the story more completely.