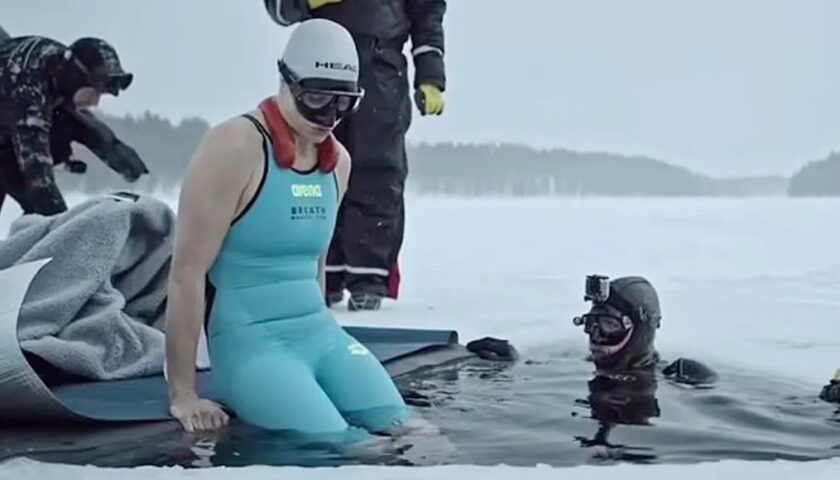 Netflix’s ‘Hold Your Breath: The Ice Dive’ follows the incredible tale of Finnish freediver Johanna Nordblad’s attempt to beat the world record for distance traveled under ice in a single breath. It is essentially a short that emphasizes the way sheer courage, determination, and support from loved ones can inspire an individual to not only achieve their dreams but also go much beyond. So now, if you wish to learn whether the details of this (quite literal) breath halting matter are based on actual events or not, don’t worry; we’ve got you covered. Here’s what we know!

Yes, ‘Hold Your Breath: The Ice Dive’ is based on a true story; not a single aspect of it is concocted or dramatized for entertainment purposes. This Netflix original is actually a documentary, which means it follows Finland’s pioneering freediver Johanna Nordblad’s endeavor to swim from one ice hole to another in one breath in real-time. She did initially (in 2020) set out to break the men’s record of 80 meters — while also crossing off the female one (her own) of 50 — yet the breakout of covid-19 across the globe halted her shot at the prominent world record indefinitely.

However, when Johanna ultimately got the chance to go again in March 2021, the female record stood at 70 meters, whereas the unofficial world mark was around 102 meters. Despite not having had much practice that year and not being in familiar waters, though (she indeed had to go from Heinola to Hossa due to rules concerning the thickness of the ice), she still gave the attempt her all. And in the end, she managed to cover an astounding 103 meters in 2.42 minutes at an air temperature of -7° celsius, with the happiest person being her sister because it was finally over.

The connection between Johanna and her elder sister Elina Manninen in real life is also exactly as depicted in the documentary; they’re very close, and the latter did help in the ice diver’s training. Moreover, being creative people, they even work on several projects together, especially since they co-own and co-operate the Green Water Production company in Helsinki, Finland. While Johanna serves as the firm’s overall creative director, her supportive, protective sister is the in-house photographer, and the duo honestly makes it seem like they love nothing more than taking up jobs together.

Coming to what first got graphic designer/freediver Johanna into ice diving, it was, in fact, the nasty left leg injury she sustained following a downhill biking accident back in 2010. She was in severe pain for three years before doctors suggested ice therapy, which calmed her down so much that she decided to submerge her whole body into the freezing water. From there, as ‘Hold Your Breath’ concedes, an entirely new world of deep-rooted relaxation and sports opened up to her, driving her to pursue it to the best of her personal as well as athletic abilities. Thus, she’s not only a record holder, but she’s also genuinely considered the most skilled in this field of her choice.