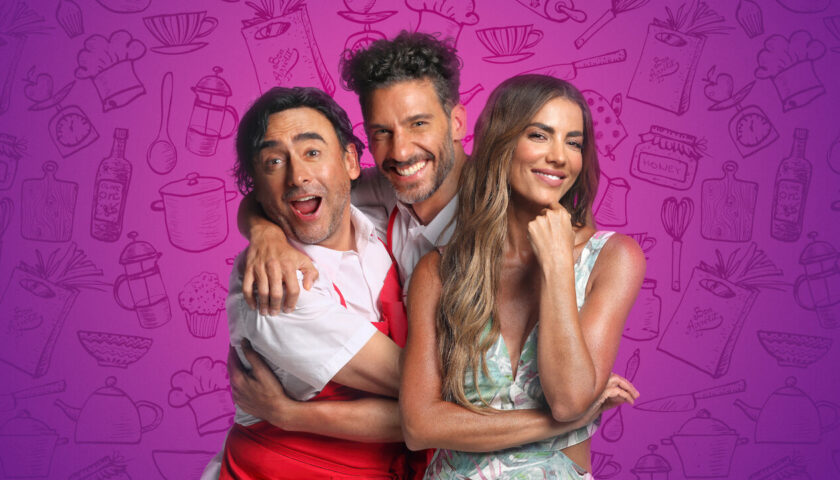 40 Years Young (Cuarentones) is a Mexican Netflix Original film directed by Pietro Loprieno. Cesár (Erick Elias) is about to turn 40 and he just found out his wife Amelia (Ximena Gonzalez-Rubio) had a secret boyfriend that was in prison for the past 10 years, his son isn’t actually his son, and his mother just died. He’s pretty much hitting the ultimate midlife crisis when his best friend and business partner Paolo (Adal Ramones) brings him with him to Cancún for a cooking competition. For Paolo, it’s a chance to win alimony money. For Cesár, it’s a chance at distraction from all of the woes of his life.

I certainly see what 40 Years Young was going for. And it doesn’t fail at it necessarily. It’s a classic tale of one friend in the dumbs and another who tries to lift him out. In doing so, the first friend drags his friend down with him and only when he makes the other person’s life just as miserable does he realize that he’s not in a good place and needs to fix himself if not for his own sake, at least for the sake of the people he cares about. The friendship between Cesár and Paolo is palpable and while it certainly suffers from the lack of transparent communication and emotional vulnerability that would have resolved half the film’s conflicts in a fraction of the time, it at least isn’t riddled with the sexism I anticipated. Paolo’s cure to Cesár’s woes includes finding somebody to hook up with, but their whole relationship doesn’t revolve around it and it’s treated casually rather than as some kind of masculine imperative.

Said quest for sex goes along fine enough, but there’s little chemistry between Cesár and his eventually new friend Naomi (Gaby Espino). It’s a relationship that makes sense, they’re open and honest about their feelings and their previous experiences. It is quite nice to see rather than their relationship being built on a lie crashed down by Cesár‘a wife and kid eventually showing up in Cancún. But there’s nothing interesting or exciting about watching them together.

the same is just as true if not more so for the underlying vehicle for the whole plot: the cooking contest. I love a cooking contest and this movie glosses over it all way too hard. The contest is shown in little detail. The food is an afterthought to the camera, despite the words spilled over the specificity of the dishes. And despite it being the whole motivation for the trip in the first place, the movie just doesn’t seem to care to show any amount of drama around their success. It’s horribly disappointing because had the rather short movie just spent 15 extra minutes building drama and fascination around the food, it may have made for a more interesting movie.,

I didn’t especially appreciate the way that Cesár’s son was more of a prop than a character. It’s not the kid’s fault, he acted his very best, but he’s constantly just put between his parents in a way that no kid should have to be and for no reason. He didn’t argue or cry. He just sat and nodded along. It was awkward and uncomfortable. The one nice thing I’ll say is that Paolo was rather funny and charming and made for an enjoyable part of the cast. He wasn’t a perfect friend, nor was he a bad one, and honestly, considering their age and manliness his emotional maturity was heartening.

40 Years Young isn’t outright bad, it’s just a whole lot of nothing interesting. It’s like the movie embodiment of a dad joke. It has its small appeal but mostly makes you roll your eyes and forget about it. Its best quality is that it isn’t awful, but that certainly doesn’t make it any good.