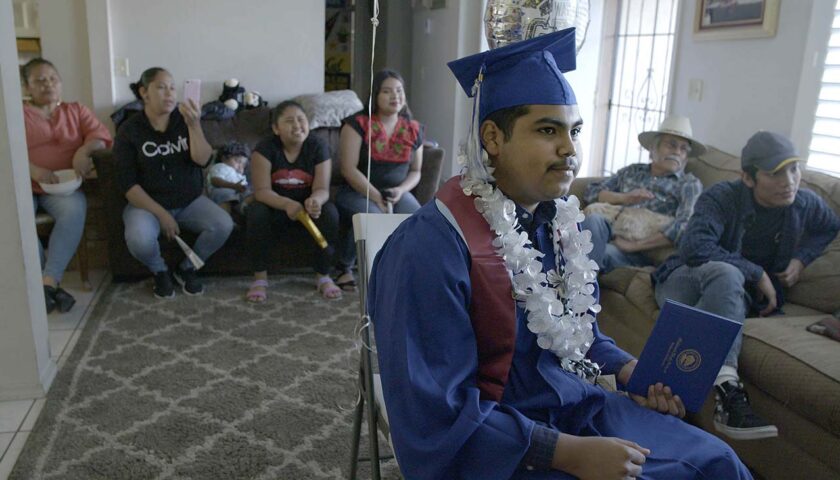 Early in Peter Nicks’ Homeroom, the documentary announces itself as a chronicle of Oakland High School’s 2019-2020 year. This activates an ominous metaphorical ticking clock.

You don’t need heavy-handed foreshadowing to know that the class of 2020 is the COVID Class, to realize that the prom the bright-faced teens are looking forward to will never happen, that the graduation they’re aiming for will be virtual, that the production of In the Heights scheduled to open on March 20 is never going to see its curtain raised.

Homeroom is, in that sense, an inspiring tragedy, a portrait of resilient youth in unprecedented circumstances, the sort of thing that hasn’t yet oversaturated Sundance, but probably eventually will.

Like Nicks’ The Waiting Room and The Force, Homeroom was designed as a vérité examination of struggling institutions. So this group of high-school students, introduced as the style dictates without voiceover or talking-head segments, was going to be a prism through which to view the education system, gentrification and the challenges of enacting systemic change within a body that’s resistant to even small modifications. Homeroom was always going to be a certain kind of tragedy or clarion call. It just shifted to respond to the events of the tumultuous year. Would the originally planned documentary have been as compelling? We’ll never know.

If the film has heroes, it’s Denilson and Mika, student representatives on the board of education for the Oakland Unified School District. You can sense that Nicks’ initial interest — other, of course, than his commitment to documentary depictions of Oakland — was following OUSD’s response to a year of teacher strikes, possible school closures and budget shortages. One major point of advocacy for Denilson and Mika is moving funds away from the school district’s dedicated police force. So yes, Nicks set out to make a doc about defunding the police, which is ahead-of-the-curve if not straight-up prescient.

It’s important to note that Oakland High School isn’t treated as some nightmare-scape of urban blight. Especially if you watch with a growing awareness of what’s coming, the vérité approach allows for normality-nostalgia to set in. When the halls are full of young adult cacophony, some part of your brain knows that empty hallways are coming, that the tightly crowded lunchroom tables or the egregious public displays of affection are already relics.

Since they aren’t aware of the dark direction their school year is heading in, the kids don’t know to be guarded, to avoid beats that play as frivolous or glib. When one girl pulls up her phone and sees the breaking news about Trump’s [first] impeachment, only to be interrupted by a classmate sharing a story about how to make Baby Yoda cookies, it feels authentic because who would say such a thing if they had social or behavioral filters in place?

Everybody is on their phones at all times, and one’s immediate instinct may be to judge the kids as distracted, as disrespectful, as addicted to this artificial form of connection. The post-COVID part of the documentary, though, illustrates how this way of relating essentially became the sole form of social interaction, education and political mobilization as we go proceeded down the checklist of Spring 2020 tragedies — all moments caught on film because of the ubiquity of mobile cameras, from Ahmaud Arbery to George Floyd. It’s like these students had been preparing for 2020 their entire lives, training to become a movement.

There’s no question that timing has given Nicks a documentary with a more wide-reaching resonance, but the same factors have hampered Homeroom somewhat as well. (The title might initially have referred to the communal centerpiece of the high-school experience, but instead it became a bit of wordplay with every student alone in their own homes.) With student interaction reduced to texts or social media messages, the doc can’t generate the same energy in its second half. A vérité approach almost demands being able to survey a scene and find the moments to focus on. Here, the filmmakers were limited by where they could be present under pandemic restrictions. Instead of witnessing the experiences of a half-dozen or more students, you lose track of almost all of the familiar faces and the doc becomes dominated by Denilson talking at his computer.

That isn’t a disaster, because he’s got a great story and it builds to a powerful climax. It just isn’t exactly the film that Homeroom started out trying to be. Last year waylaid many plans and subverted many intentions. Homeroom is one impressive response to that adversity.