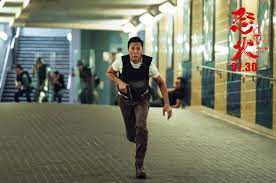 This contemporary Chinese martial arts crime flick is a perfect vehicle for its two male leads – Donnie Yen and Nicholas Tse. Yen plays the good cop. Tse is his former good-cop buddy, who has become really good at being really bad for reasons we learn along the way. Many of these films are thrown together with a muddled plot that exists only to set up their action sequences. Here we have a shining exception, as main characters and their backstories are fleshed out to fine advantage, making for a production that satisfies the brain as well as fulfilling the desired adrenalin quota.

Yen has nearly 80 acting credits and handful of directing stints, including fight-scene choreography. He comes by his art honestly, as the son of a martial arts master (Fun fact – that’s his mom, not his dad.), trained from childhood in multiple disciplines. Although I’ve only seen about a fourth of his films, I’m inclined to think that at this stage of his career, Yen may be incapable of cranking out a bad movie. (I specify the present because after writing the previous sentence, I caught one of his flicks from 1991, showing he didn’t always have good scripts to choose from.) He’s perhaps best known for starring in the history-based Ip Man series. There, as here, Yen embodies the stoic integrity of a Gary Cooper, with the bonus gift of kicking butt like a Jet Li.

The Raging Fire plot involves a cop-killing band of robbers, motivated by both grudges and gains. Yen is in charge of catching them; we learn early that Tse is the ringleader, with his motives unfolding throughout. The tale plays out more coherently than is often the case in Asian cops vs. Gangs flicks (actually, the same is true for many Hollywood entries, as well), magnifying the emotional impact of its splendidly-staged action sequences, stuffed with all the fights, shootouts, chases and explosions genre fans crave. A couple of Yen’s one-on-ones are particularly exciting and creatively staged.

Late director Benny Chan deserves credit for not only pacing the action flawlessly, but editing and lighting those scenes for clarity of who’s doing what to whom that’s way above the norm from both sides of the Pacific, in what is, lamentably, his final project. Tse is also superb as a more complex villain than usual, with an understandable, almost sympathetic, transition from valued colleague to nemesis. That all adds up to a gem within its genre.