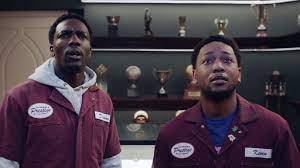 “Aspiring club promoters and best buds Damon (Tosin Cole) and Kevin (Jacob Latimore) are barely keeping things together. Out of money, down on their luck and about to lose the roofs over their heads—and freshly fired from their low-lift jobs as house cleaners—the pair needs a huge windfall to make their problems go away. In a ‘what the hell?’ move, they decide to host the party of the year at an exclusive mansion, the site of their last cleaning job, which just happens to belong to none other than LeBron James. No permission? No problem. What could go wrong? How about a time traveling DJ, undependable security, a runaway guest list, one borrowed Lamborghini, angry rival promoters, a stolen championship ring, escalating property damage, an angry koala..? But also, one outrageous ride stacked with double-take cameos and timeless throwback tracks, R-rated comedy and two friends worth cheering for… you have to see to believe.”

Warner Bros. Pictures’ upcoming reboot of the 1990 comedy cult classic House Party has just received an official trailer. The film will be released theatrically early next year and unlike the first film, which followed high schoolers, will feature two 20-something concert promoters who decide to host an epic party at a major celebrity’s mansion after they find themselves down on their luck. The film stars Tosin Cole, Jacob Latimore, Karen Obilom, DC Young Fly, and Scott Mescudi.

The fun and vibrant trailer begins by introducing viewers to best friends Damon (Cole) and Kevin (Latimore), who struggle to make ends meet as concert promoters, having to keep day jobs as house cleaners. While the duo is out on a job cleaning a mansion, they realize they are actually in LeBron James’ house, a fact that is proven further when they unlock a hologram of James himself that is designed to give the famous basketball player compliments. The friends discuss how they both need money, so they soon decide they should throw an extravagant party at James’ house for some heavy-duty cash. As the trailer goes on, it reveals plenty of hijinks, including a koala smoking marijuana, as well as a handful of exciting cameos from icons like Snoop Dogg, Lena Waithe, and Lil Wayne. Based on this trailer, any fan of the original or of just fun old-school comedies will most likely have a blast with House Party.

House Party serves as the directorial debut from Grammy-winning music video director Calmatic. The film’s script is written by Stephen Glover and Jamal Olori. LeBron James and Maverick Carter serve as the film’s producers. House Party was originally supposed to drop this past summer exclusively on HBO Max, but since Warner Bros. decided they wanted to focus more on theatrical releases instead of straight-to-streaming, the film was given a theatrical release date.