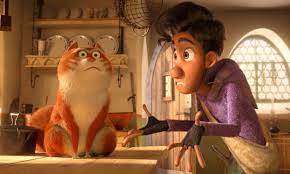 The trick with a film like this is to make a film that is both accessible to everyone, and that includes young children as well as to the Terry Pratchett faithful. I’m delighted to say this film manages both in spades.

The casting is fantastic and the animation, including British animation is wonderful and a delight not to be in the world of Disney for an animated feature. I don’t know much about Terry Pratchett, but I have read this book and it manages to hit all the points that I would expect, with great characters and so many laughs in the cinema where we watched an early showing. The children, especially with riveted it seemed.

Animated movie “The Amazing Maurice,” based on a Terry Pratchett novel and featuring a voice cast led by Hugh Laurie and Emilia Clarke, has sold to multiple major territories. Global Screen will present the film as a market premiere at Cannes.

Offers from the U.S., Benelux and South Korea are on the table. Sky will be releasing the movie in the U.K. later this year.The film centers on Maurice, a streetwise cat, who has the perfect money-making scam. He’s found a stupid-looking kid who plays a pipe and has his very own plague of rats – rats who, strangely, are educated and literate, so Maurice can no longer think of them as “lunch.”