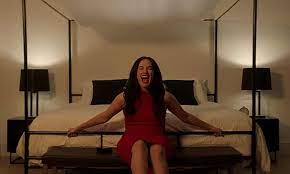 An unnamed woman is freaking out. Is someone stalking her? She boards an elevator and she gets a call from an unknown number and, like a grade-A moron, she answers. Next thing you know, the walls are closing in, squishing her, and before we see anything gross or bloody, no eyeballs popping or bones being crushed or guts squidging out the edges, the movie cuts away — sorry, sickos! Next we meet Jenn the Vaguely Discontented (Siegel). She attends her bestie Gina’s (Lucie Guest) housewarming party, where she meets Dr. Meade (Jason O’Mara) and bumps into her ex-fiancee, Brian (Jaime M. Callica). Gina swears by Dr. Meade’s “therapy” — all kinds of good things happened to her since she started seeing him, so maybe if Jenn the Vaguely Discontented made an appointment, she’d be Less Vaguely Discontented than before.

Wait, isn’t hanging out at your therapy patient’s social gathering in order to acquire new patients kind of strange? Yes, and the script even addresses it, with a line of dialogue you’ll want to punt into orbit. Anyway, Jenn the Vaguely Discontented winds up going home and sleeping with Brian, and then going to see Dr. Meade, which requires walking down a long, ominous hallway and entering his HYPNOCHAMBER, decorated with red, triangle-shaped lights and a towering wall full of geometric art, which is more formally known as Spider-Man Villain Decor. None of this fazes poor Jenn, who tells the doc that she’s unemployed, and depressed because she split with Brian in the wake of their child being stillborn, a revelation rendering her slightly less vague in her vague discontent.

So she lets Dr. Mezmero fire up his pulsing strobe lights and put her under. She wakes up and even though it seemed like the blink of an eye, an hour passed. Unlike the rest of us, Jenn questions none of this. Whatever the hell happened must have worked because three months go by and she gets a new job and things are starting to look up. So she works and meets someone new and has a family and is no longer discontent, and lives happily ever after. No! To the surprise of absolutely no one, Mezmero’s been gamboling through Jenn’s subconscious, flipping switches and installing new software, like a diabolical fiend! Jenn starts doing some movie-plot math, piecing together what happened during her lost-time blackouts, and decides she needs to Google the good doctor, then call a detective (Dule Hill) for some assistance. And hey, guess what, Mezmero has a suspicious past, revealed when the cop spills all kinds of information to a civilian he just met, which is when the movie only begins to stretch credibility like yoga pants on a hippopotamus.

Hypnotic’s ability to be very silly without being particularly entertaining is quite a remarkable achievement. Directors Matt Angel and Suzanne Coote maybe stir up a light whiff of a Hitchcockism or two, but the plot, dialogue, characters, score and cinematography couldn’t be more off-the-rack if you bought them at Target. This is one of those everything-is-a-plot-device, waiting-for-the-other-shoe-to-drop, just-get-it-over-with anti-suspenseful movies populated by only the dimmest bulbs of characters who exist to fulfill a series of stock thrillerisms cribbed from countless forgettable basic-cable movies. The idea that a male doctor would invade a woman’s mind in order to manipulate her has psychosexual connotations, but the movie shows no willingness for provocation — it’d rather patronize us and let us think we’re smart for predicting its every lame, halfhearted twist and turn.

It’s hard to root for a protagonist who walks headlong into the villain’s lair, ignores all the screaming neon warning signs and hands over the keys to her noggin. Will Jenn learn a lesson about mind over matter, or at least never to trust doctors in offices with major David Lynch vibes? Who cares. For a movie about the Power of the Subconscious, Hypnotic sure is empty-headed. Searching beyond basic plot execution for deeper meaning is like psychoanalyzing a stuffed animal — there’s nothing between its ears but fluff.