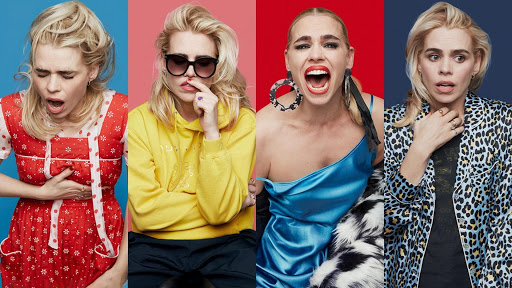 This year has seen television drama so vibrant, inventive and entertaining that the first reaction is gratitude, but the second is frustration. You mean to say it could have been like this all along? This whole time, TV audiences have been stuck at the same party, in the same unending conversations about sad cops and bad men, because prejudice and failure of the imagination has kept a fabulous throng of bold, clever talent locked out on the other side of the door? Why is this only just happening now?

With TV commissioners finally giving creative freedom to writers like Michaela Coel (I May Destroy You), Sophia Al-Maria (Little Birds) and Lucy Prebble (I Hate Suzie), it’s no wonder that, once past the threshold, the first thing these storytellers are doing is blowing up the place. The explosive force of their work has been concentrated by years of being tamped.

I Hate Suzie explodes with energy and ideas. Co-created by playwright and Succession’s Lucy Prebble with Billie Piper (the pair last collaborated on 2007’s Secret Diary of a Call Girl), it’s an electrifying series that’s constantly shedding its skin to become something new. Director Georgi Banks-Davis plays with genre, shifting style each episode to capture a different element of its lead character’s crisis.

That’s Suzie Pickles (Piper), an actor in her thirties who lands a career-saving role on the same day that her world is wrenched apart by a nude photo hack. The catastrophe reverberates throughout the episodes, destabilising Suzie’s professional and personal life, as well as her sense of self. Having grown up in the public eye since winning a TV singing competition as a teenager, Suzie has constructed herself to please other people. When her life is blasted apart, it’s devastating, but also the first chance she’s had to question whether or not she wants to put the pieces back in the same place.

Piper is captivating in the lead. The first episode is fist-bitingly stressful and she’s the nexus of nerves at its centre. When news of the hack gets out, Suzie’s at home being primped for a magazine photo shoot. The chaotic invasion of stylists, directors, journos and hangers-on in her private space reflects the violation of the hack, but this particular incursion is all part of the territory. Wry comment is passed on how celebrities are expected to package their lives up for public consumption – comment that becomes universally applicable in the age of the social media profile.

Suzie’s life is rarefied, with its sci-fi convention appearances, broadsheet interviews and on-set zombie Nazi shenanigans (not unlike Piper, best recognised in these parts for her appearances in Doctor Who and Penny Dreadful, Suzie’s a star of genre TV), but its demolition makes it universal. Susie’s relationships may all be affected by her career – her best friend Naomi (Leila Farzad) is also her manager, putting a business spin even on that intimacy – but her problems with her marriage and young son will be recognisable to many.

She’s married to Cob (Daniel Ings) a university lecturer who hasn’t made peace with Suzie’s breadwinner status and whom she struggles to desire. Cob doesn’t respect his wife’s line of work and belittles her achievements to shore up his own ego. Fans sexualise her and treat her creepily like their property, while a salacious and crafty media commodifies her life for clicks. On top of which, she feels as though she’s failing her deaf son, and doesn’t know who she really is or what makes her happy. Her identity crisis could be that of a great many people.

That ongoing crisis is painted in expressive colours with stylistic ingenuity by Banks-Davis. None of the show’s surprises will be spoiled here, but there are plenty to look forward to in the first half alone. Each episode is themed around a particular emotion from the stages of grief, from shock and denial to anger and acceptance. The structure allows for a broader exploration of those concepts, and for the series to go through several figurative and literal costume changes.

The supporting cast is strong, with a joyfully naughty turn by Dexter Fletcher in episode two (filmed in part on location at MCM London Comic-Con), and excellent work by Farzad and Ings as the two satellites orbiting Suzie. It’s a hectic, involving whirlwind of a story that sweeps you up before depositing you back on the ground with some complicated truths and hard-to-forget images. This kind of exciting, vigorous TV should by rights blast open that closed door for good, allowing for the arrival of many more varied stories by many more varied women storytellers.

On that – before I Hate Suzie went into development at Sky, it was turned down by several broadcasters, writer Lucy Prebble told this week’s Edinburgh International Television Festival. They already had their ‘woman having a breakdown’ show, she heard, so weren’t looking for another. You could lose the last three words of that quote and the same might have applied. Stories about women’s lives have for too long been considered a niche genre – like male celebrity fishing programmes or Joanna Lumley travelogues, why would anybody need more than one? Well, this and I May Destroy You and the sister-shows breaking through alongside them are your answer. Because widening perspectives in front of and behind the camera benefits everybody, television most of all.