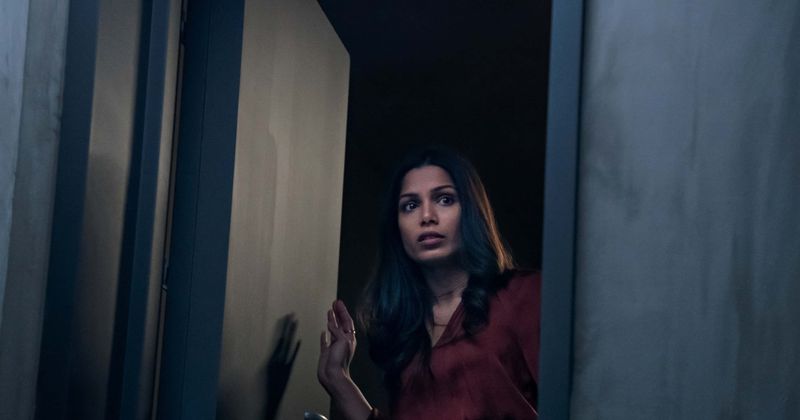 If we have learned anything from movies of recent years, it is that moving into one’s dream house will surely lead to terror and death. That improbable yet familiar arc is traced again in “Intrusion,” wherein the domesticity under threat belongs to a wide-eyed Freida Pinto. Director Adam Salky and writer Christopher Sparling’s thriller will provide uninspired if serviceable fodder for subscribers when it launches on that platform Sept. 22.

The Parsons have just moved from Boston into a luxe, secluded New Mexico home that Henry (Logan Marshall-Green) designed, in part to provide him and Meera (Pinto) a fresh start after her difficult recovery from breast cancer. After dining out one night, they return to discover the place has been ransacked, though the intruders took nothing apart from a laptop and two cellphones. An alarm system is hastily installed — yet there’s another break-in, this one while the couple are asleep in bed.

That event has a much more violent denouement, the perps turning out to be a family of local laborers who all worked on building the house. Their rap sheets are long enough to suggest simple criminal intent. But notably, a young woman related to the three men had gone missing a month before. And as Meera accidentally stumbles on, then deliberately seeks out, clues to explain a deepening mystery, it is her husband’s actions that begin to seem the most inexplicable and worrying.

The Parsons home (an actual residence in the Albuquerque area, its interior redressed by production designers Brandon Tonner-Connolly and Matt Hyland) is tasteful, but also a little bland and impersonal. Kind of like their marriage — and their movie. Apart from Meera’s recent health condition, these characters aren’t given any detailing in the script; they have jobs that remain vague, and no visible friends or family that might illuminate them.

Nor do the attractive leads add much, with Pinto running a rote gamut of damsel-in-distress emotions that make her character seem too old-school “helpless” even as she’s Nancy Drew-ing around. As for Marshall-Green, he does not quite pull off the revelation of a major hidden side here. Both these performers have been fine elsewhere, but can’t seem to rise above “Intrusion’s” genre conventions and contrivance. They come off as a photogenic Barbie and Ken whose drastically altered dynamic under crisis is no more convincing than the plastic mutual cooing they’ve apparently sustained for 12 years of marriage.

Nonetheless, the film is just slick, pacy and intriguing enough for us to suspend sufficient disbelief while it’s going — never mind afterward, when it all evaporates from the memory in a trice. Salky doesn’t get to demonstrate the more nuanced dramatic touch of his prior features “Dare” and “I Smile Back.” Still, he works up an acceptable froth of urgency in suspense or action when required.

If this is one of the more generic thrillers Sparling has written to date (others include the excellent Ryan Reynolds vehicle “Buried” and newly Toronto-premiered “Lakewood”), it still springs an adequate number of plot twists. They might’ve packed more punch in a film with greater attention to atmosphere and character. But if you regard “Intrusion” as a kind of audiovisual pulp paperback, it will pass the time ably enough — like a page-turner you might buy at the airport in Boston, then finish and abandon to the seat-back pocket upon landing in Albuquerque.