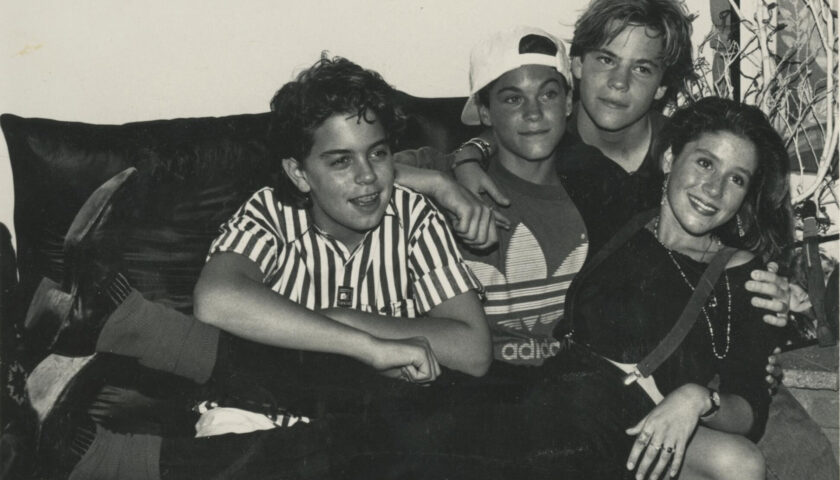 By the time she turned 13, “Punky Brewster” star Soleil Moon Frye had done more to impact pop culture than most Americans will in their lifetime. (“Holy macanoli!” and mismatched high tops, anyone?) But once the show was canceled in 1988, things stalled. That’s roughly when Frye started carrying a video camera practically everywhere she went, documenting a one-in-a-million adolescence that was anything but the squeaky-clean, always-sunny sitcom that had made her famous. Nor will it seem very relatable to those who idolized the fellow celebs she called friends, even if you spent the decade with their faces pinned to your walls.

With “Kid 90,” Frye opens “Pandora’s box” — as she calls the archive of video cassettes, diary entries, answering machine messages and so forth that she kept locked away for more than 20 years — bracing herself for what she might find, and how those memories might make her feel. The resulting film, which hits Hulu amid a fresh wave of ’80s nostalgia (including Peacock’s recent “Punky Brewster” reboot), feels like it must have been a cathartic experience for the former child actor, who’s been bracingly candid about many personal issues — from peer pressure to teenage plastic surgery — over the years. Turns out, she was holding quite a bit back.

Those hoping for a gossipy tell-all will be tickled by the abundance of cameos from former teen heartthrobs — including amigos Brian Austin Green (“Knots Landing”), David Arquette (“The Outsiders”), Mark-Paul Gosselaar (“Saved by the Bell”) and Leonardo DiCaprio (who serves as exec producer) — even if the details of what any of these kids did together back in the day are hazy. There’s footage of drinking and drugs, along with discussion of a nonconsensual sexual experience (long buried by Frye) and losing her virginity to an older actor (whom the film coyly identifies), but it’s unclear whether these are one and the same.

Frankly, there’s a lot that’s unclear about “Kid 90,” which may be a matter of discretion (if Frye was filming constantly among such high-profile friends, surely they wouldn’t appreciate having those youthful peccadilloes publicly aired all these years later) or else just a consequence of the film’s Cuisinart aesthetic. This is Frye’s third feature, following indie “Wild Horses” and father-daughter doc “Sonny Boy,” and while filming has plainly been a lifelong obsession, filmmaking does not seem to be her calling.

The exhaustingly quick-cut, consistently cruddy-looking montage alternates between low-grade camcorder footage, complete with tape hiss and tracking glitches, and brightly lit contemporary interviews, shot to look like testimonials for teeth whitener. Frye films herself in conversation with these old friends (the aforementioned celebs, plus Stephen Dorff, Balthazar Getty, Heather McComb, Jenny Lewis and Jane’s Addiction frontman Perry Farrell), and they’re all open and eloquent with her about the growing and healing they’ve done since they were teens.

“It’s the most awkward period of your life … when you’re probably 13 to 19, and that’s when we were in front of the cameras,” says Gosselaar, suggesting that the experience obliges child actors to conduct themselves like adults before they’re ready. “And that’s one of the reasons I don’t want my kids in it,” he adds.

But who wanted this for Frye? In one throwaway moment, she suggests her parents put zero pressure on her. If anything, it looks like she had an unusually supportive family, which might have protected her from the darkness that consumed so many around her. At one point, Frye enumerates those in her circle who died young, and here, the doc really starts to feel like it exists only for those who appear in it — an exclusive yearbook full of “stay cool” scribbles that have gone unexamined for decades. Who are these tragic figures? If you weren’t alive or celebrity obsessed in the ’90s, this attention-deficit doc offers virtually no context.

Early on, the movie feels like an inside account of the coolest kids in the world, before the truly punky self-destruction that followed. But Frye doesn’t necessarily blame showbiz, which didn’t know how to handle her physical transformation shortly after “Punky Brewster” ended. A clip from a guest appearance on “The Wonder Years” features Kevin (Fred Savage) overreacting to her teenage breasts, which grew so large so quickly that she opted to have reduction surgery at age 15. It’s uncomfortable — but also unsurprising — to watch clips in which TV hosts crudely allude to the young actor’s physical development. This was the early ’90s, and even today, commentators and journalists are learning how to be sensitive when discussing body image.

Frye implies that her early TV success should have paved the way to serious acting opportunities, even though you can count on one hand the number of ’90s kids who accomplished that — and the movie is oddly tone-deaf to the hundreds of thousands of aspiring child actors who would’ve given anything to be in her mismatched shoes. At the time, recording everything seems to have been a compulsion for Frye, and though there appears to be little rhyme or reason to what she documented, it’s a relief that she survived to sort through it herself. Too many of Frye’s peers died young, leaving behind no such treasure trove of insights into their suffering. But in many ways, Frye’s collage only makes sense to its maker, where someone else might have brought enough distance to put all this material in perspective.